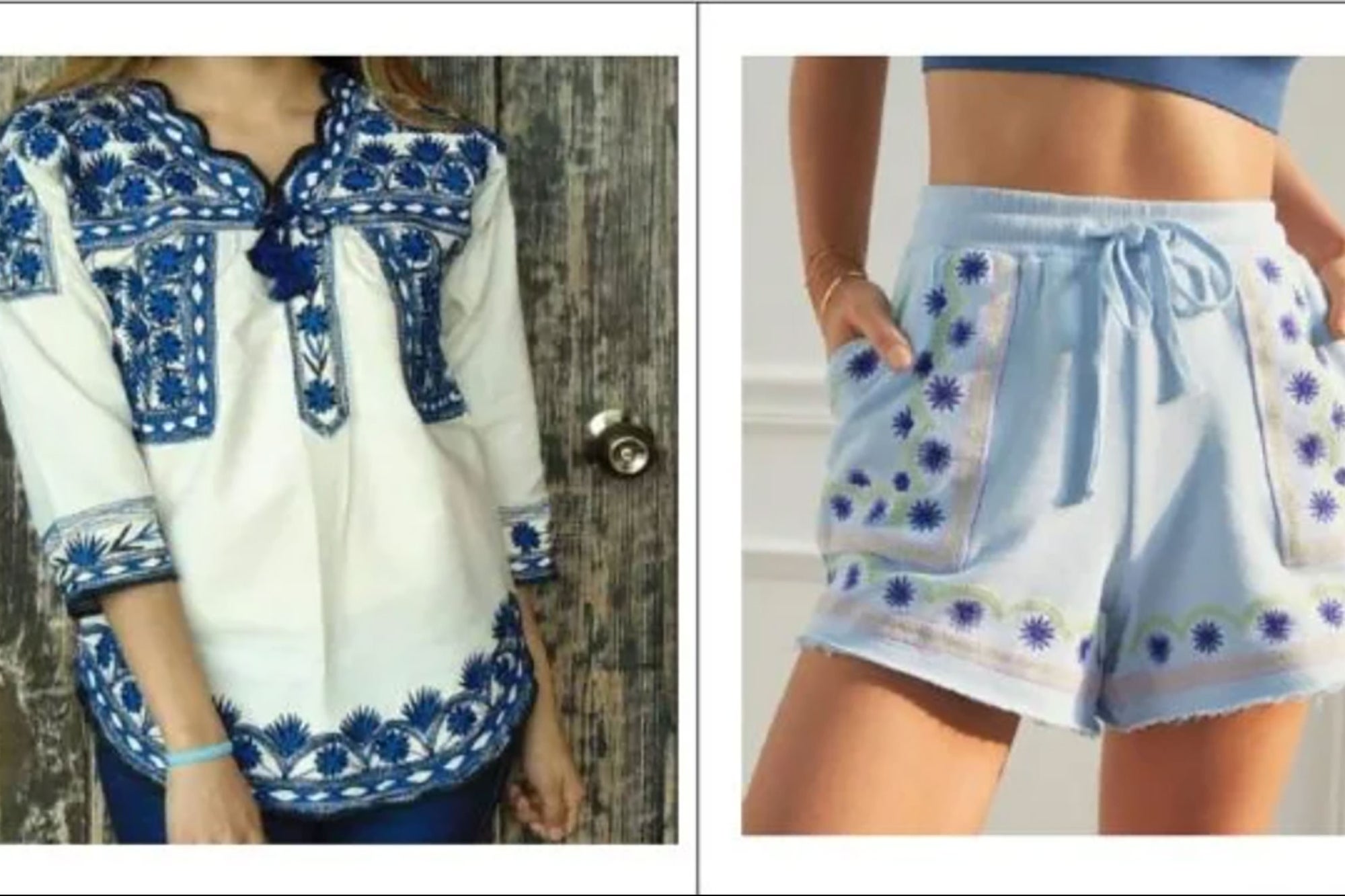 The National Institute of Indigenous Peoples (INPI) of Mexico, calls for the American clothing company Anthropologie to stop copying the textile designs of the Ayuuk (Mixe ) indigenous community of Tlahuitoltepec, in the state of Oaxaca, for the second time .

The same institution “condemns the plagiarism of the textile designs, artistic and cultural expressions of indigenous peoples, as they are part of their intellectual property and their improper or unauthorized use constitutes a violation of their collective rights.”

It is a specific embroidery, some flowers that correspond to the ‘Xaam níxuy’ blouse, which has already been copied by various brands and profit from the collective intellectual property of these peoples. This garment is part of the traditional clothing of Ayuuj women.

Anthropologie used the flower pattern for the ‘Marka embroidered shorts’ , which according to INPI the community never gave their authorization for the use of their design and requested that I stop selling the garment immediately.

Image: Secretary of Culture of Mexico

The same statement states that according to article 31 of the United Nations Declaration on the Rights of Indigenous Peoples, “it is a right of communities to maintain, control, protect and develop their cultural heritage, their traditional knowledge and their cultural expressions, in addition to the collective intellectual property on them ”.

For its part, the Government of Santa María Tlahuitoltepec, Oaxaca, also demands that the Anthropologie firm recognize and credit the people for the design . In addition to asking the community for a public apology for the damage they are causing by denying the universal human right to recognize the creations, intellectual property and biocultural heritage of the locality. 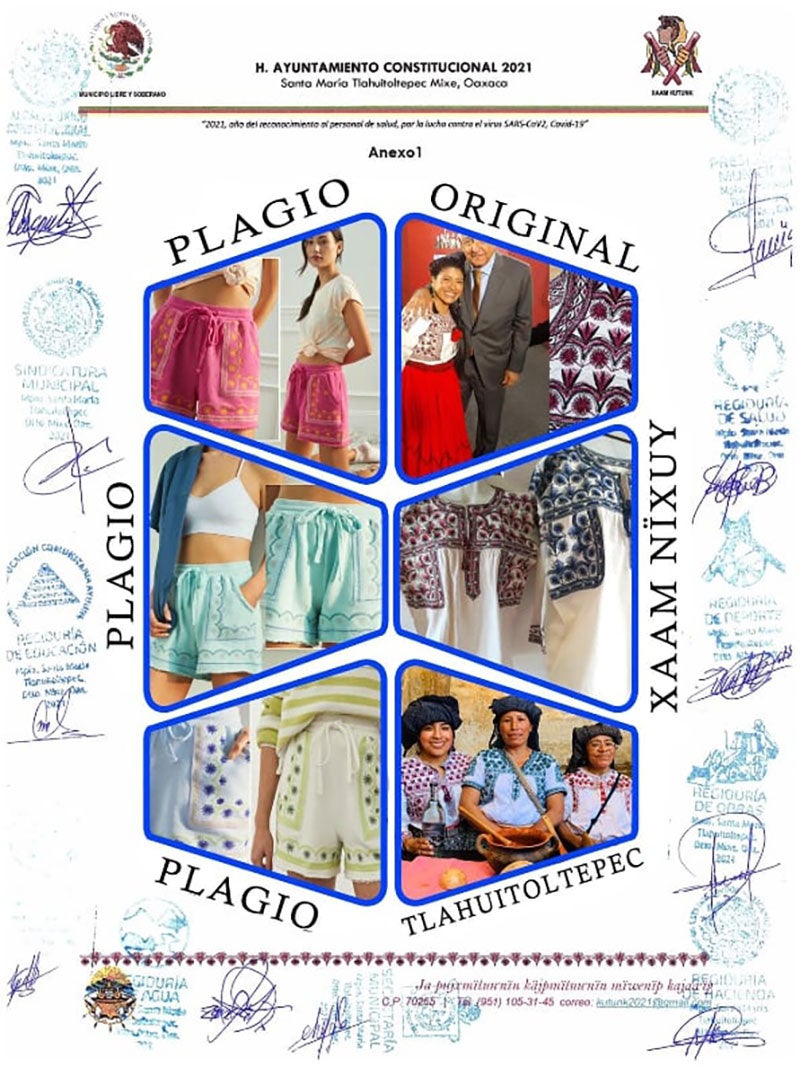 Cultural appropriation in the fashion industry

In the letter they comment that this same embroidery has been plagiarized five times between the years 2009 – 2019 and they explain that this practice and the appropriation of indigenous Mexican designs are a systemic issue in the fashion industry.

The appropriation of indigenous designs is a systemic problem in the fashion industry. @Anthropologie is one of the brands that plagiarized designs from Sta María Tlahuitoltepec https://t.co/VvLDdcE8T2 pic.twitter.com/jBx3TAfiTA

“Throughout Mexico there have been 39 cases of plagiarism by 23 fashion brands such as Zara and Carolina Herrera , (between 2012 – 2019) who appropriated designs from indigenous communities in Oaxaca, Chiapas and Hidalgo.”

Only in May, the Secretary of Culture of Mexico had already requested an explanation from the clothing brands Zara, Patowl and Anthropologie for improper cultural appropriation. In particular, she noted that Zara imitated the Mixtec huipil embroidery from Oaxaca on one of her dresses , made a comparison, and asked her to clarify how she planned to give back to the artisans. The agency also questioned the other two brands with similar letters.

The shorts are no longer on the Anthropologie website, which cost 693 pesos ($ 84.71) and were available in three different colors. However, the company has not issued any comment in this regard.

From the world of fashion, the issue of cultural appropriation is a complex issue, however, plagiarism is the line that simply marks when cultural codes are respected. Not only fast fashion brands have been accused, also on the list are Louis Vuitton, Isabel Marant, Mango, Rhapsody , among others.

The job of designers is to be inspired, look around, and from there create, not adjudicate an already established discourse. In the words of a Mexican artisan for El País , “big businessmen, big companies, have the opportunity to support artisans, and that’s the way it should be. But you see that that does not happen like that. I am not affected by the copies of other artisans, but I am talking about us as equals ”.

Recognition and respect for the work of the other is a fundamental step for the fashion industry, since artisans do not close the doors to the world, if they do not want to be recognized.

And you, what do you think cultural appropriation is?

Denial of responsibility! TechiLive.in is an automatic aggregator around the global media. All the content are available free on Internet. We have just arranged it in one platform for educational purpose only. In each content, the hyperlink to the primary source is specified. All trademarks belong to their rightful owners, all materials to their authors. If you are the owner of the content and do not want us to publish your materials on our website, please contact us by email – [email protected]. The content will be deleted within 24 hours.
americanAnthropologiebranddenouncesdesignsEducation newsEducation updateintellectual property
Share

6 Top Instructor-Led Training Tips For SMBs On A Tight…

What Impact Will Fintech Have on the Future of Investing?

Madison Keys out of Wimbledon with injury | Tennis News…