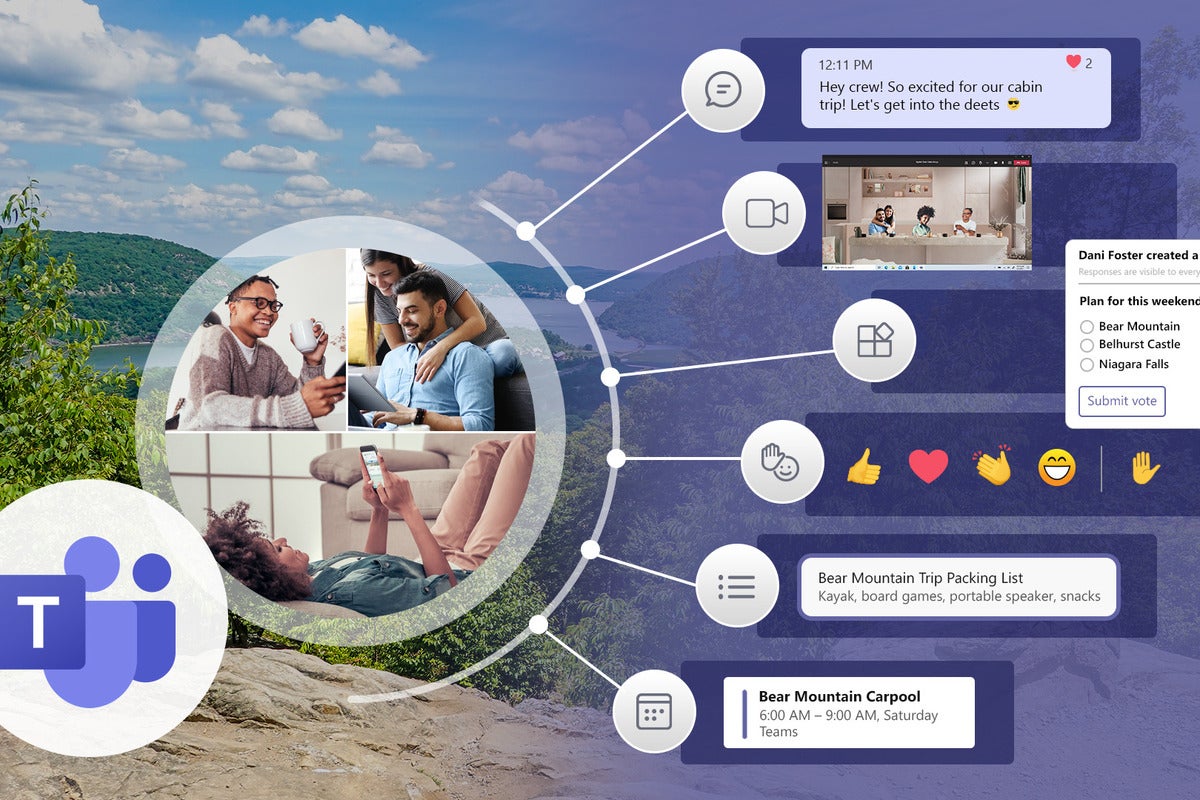 Microsoft wants you and your crew to hang out on Teams

Five years ago, Microsoft brought forth Microsoft Teams as a workplace collaboration tool to compete with Slack and Hipchat. Today, Microsoft is evolving Teams into a place where you can kick back after hours as well, taking on Discord, WhatsApp, Snapchat, Signal, and others in what the company hopes will be a resurgent consumer offering.

The awfully named “Personal features in Teams” launches today as part of the existing Teams app on Android, iOS, the Windows desktop, and even the web. (We’re calling it “Microsoft Teams for consumers,” and you should too.) To try it out, simply click the Teams icon on your device. In addition to your work account, you should see the option to add a personal account, too.

The question you might be asking: After years of accumulating contacts, groups, habits, and practices on any of the other communication apps, why now use Teams instead? And will Teams users want to use the same app that’s associated with their workday to plan outings with friends?

Christy Hughes, director of Modern Life of Microsoft, believes they will. Hughes said that consumers do want separation between their work and personal lives, but Teams for consumers addresses those concerns. “It really is centered on the consumer and people that want to be able to stay coordinated across their life with their families,” she said.

How to set up Microsoft Teams for consumers

Microsoft’s concept of group chat is purpose-driven, and it’s organized as such. While it could serve as merely a virtual space to hang out with your friends, creating a group of friends is designed around a task—say, planning a trip. “You’re not forced to go down that route, but usually there is some sort of a purpose,” Hughes said.

Once the group chat has been set up, interacting with your friends will feel, well, like Teams. You’ll be able to chat back and forth, share emoji and GIFs, and so on. Microsoft feels pretty strongly that in-chat polls will be used as groups figure out what they want to do. One feature that Teams does not offer yet, however, is a Snapchat-like limit on the persistence of images, so that images from a boozy night out will live on.

Each chat will include both the chat window itself as well as an associated “dashboard.” It’s here that Teams becomes Teams with shared tasks, shared photos, even shared spreadsheets for shopping or planning an event. (There’s not a whole lot of chill in Teams for consumers, it seems.) According to Hughes, this is a strength: Consumers have more than 110 apps on their phones today, and consolidating several functions (planning and more) within a single app is more useful than scattering these tasks about.

During the call you’ll be able to respond with emoji, too, which will float up from the bottom of the screen. If you’d like, you can also use a consumer version of “Together Mode,” which extracts the faces and bodies of the people you’re talking to and puts them in an attentive row or rows with a custom background, such as a virtual coffee shop.

Can Teams for consumers kick off a consumer revival at Microsoft?

Microsoft watchers can’t help but view the company’s efforts in consumer somewhat skeptically, since Microsoft killed off the Zune, its Groove Music service, and Windows Mobile phones. Even the company’s social network, so.cl, came and went. On the other hand, Microsoft seems driven to add new features to Teams on a frequent basis, so this could be promising for the consumer version as well.

“Microsoft is investing in consumer like it hasn’t before, and so you’re going to see a lot more coming from the consumer side that you haven’t seen before,” Hughes said. “And Teams is a big one of those.”

Loading...
Denial of responsibility! TechiLive.in is an automatic aggregator around the global media. All the content are available free on Internet. We have just arranged it in one platform for educational purpose only. In each content, the hyperlink to the primary source is specified. All trademarks belong to their rightful owners, all materials to their authors. If you are the owner of the content and do not want us to publish your materials on our website, please contact us by email – [email protected]. The content will be deleted within 24 hours.
crewgadget updatehangMicrosoftteamstech newstech updatetechi live
0
Share