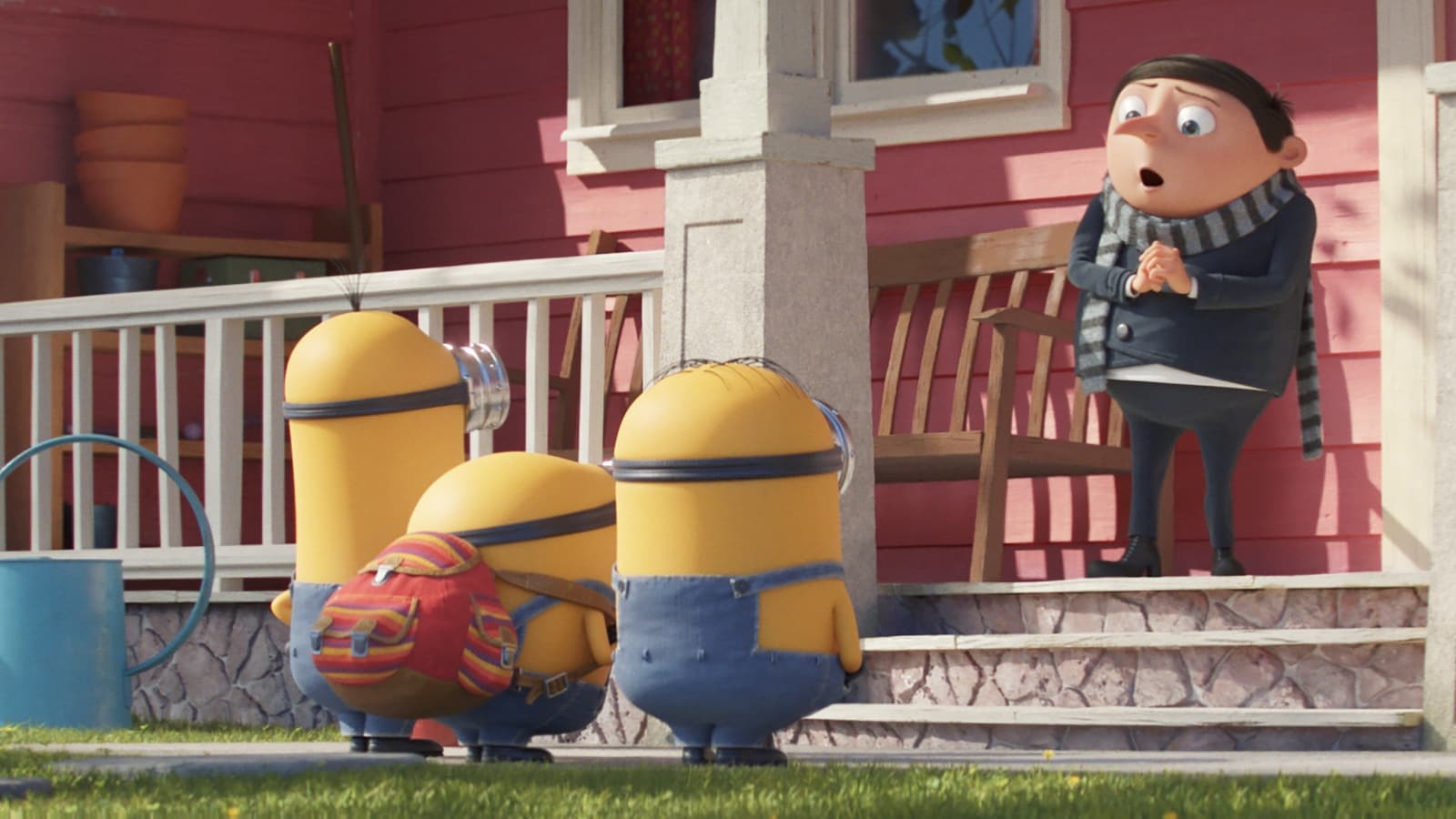 Illumination has been changing the definition of villains one Despicable Me film at a time. Minions: The Rise of Gru, the latest spin-off in the franchise, tells the story of a kid’s transformation into a supervillain before he eventually turned into a secret government spy. The prequel does not disapppoint and shows how our favourite supervillain Gru was always a hero at heart.

Minions: The Rise of Gru is set in the 70s, between the timelines of Minions (2015) and Despicable Me (2010). The Minions (voiced by Pierre Coffin), including Kevin, Stuart, and Bob, arrive at Gru’s house in large numbers requesting him to hire them after witnessing his super-villainy in the first film where he steals the Queen’s Crown. The minions go to all lengths to convince Gru to hire them, and name him their ‘mini-boss.’ Steve Carell is perfectly convincing even as he voices the younger version of Gru.

Gru is an awkward 11-year-old who wants to be a supervillain. He cheese-rays innocent bystanders in the queue for ice cream and eats the treat in front of people working out. He fart-bombs an entire movie theatre to enjoy a movie with his minions. But he manages to look adorable rather than irritating in his mischiefs, as you can also see his need for validation and the bond he shares with the minions. You can also see a glimpse of a future Gru who is the doting father to three young daughters as even in his childhood he acts as a father to minions at bedtime.

The film introduces Vicious 6, a notorious supervillain group that betrays their leader Wild Knuckles (Alan Arkin). The other members of the Vicious 6 are its new leader Bell Bottom (Taraji P Henson)– a disco diva who believes in pure villainy; an evil Viking Svengeance (Dolph Lundgren); Nun Chuck (Lucy Lawless)– a spooky nun who splits her crucifix into weapons, Jean Clawed (Jean-Claude Van Damme)– a lobster-limbed baddie, and Stronghold (Danny Trejo)– who has big metal hands as his weapons. They humiliate Gru, setting the wheels of the plot in motion.

While Gru has his moments, it’s the new minion Otto who steals the show with his cartoonish charms. The minion with braces is known for talking incessantly, and unbridled stupidity. To win Gru’s trust, he goes on a tricycle journey battling rain, ponds, and a death valley.

While the actors voicing the villains in the group do what is needed of them, the Vicious 6 members don’t have their own stories and are merely there to support Gru’s storyline. Gru’s new-formed bond with Wild Knuckles brings emotional moments in the film, as both of them fit the franchise’s core idea of villains actually being heroes under all their tough exteriors.

Master Chow (Michelle Yeoh), an accomplished Kung Fu master turned acupuncturist, is part of some of the funniest and most adorable moments in the film as she teaches Kung Fu to Kevin, Stuart, and Bob.

One really feels the absence of a creative or even partially fresh storyline in The Rise of Gru as it follows the same pattern as other films in the franchise. A precious item will be stolen, someone will go missing, there will be a big battle in the end, and minions will save the day accidentally after ironically causing accidental mayhem throughout the film. It could work well if all you expect from the Despicable Me factory is lighthearted comedy and a good time instead of something new and challenging. Also Read| Controversial opinion: Is it time for Despicable Me’s Minions to be retired?

The Rise of Gru has also learned from the mistakes made in its prequel, Minions. While Minions had become too slow to watch as it focused on a single storyline- the minions’ search for a master, The Rise of Gru had multiple subplots that keep you entertained until it arrived at a power-packed climax.

It doesn’t mean that the film doesn’t have its strong moments. At its core, it’s a children’s movie with a few hidden lessons. More than anything, Gru wants to find his people, and get the respect which he didn’t get at his home or his school. He fires his minions in search of a better group, but later learns during his time with Wild Knuckles that the best results can be achieved only when you have your friends helping you in little ways on every step.

The animation, which is as glossy as Illumination movies always are, appeals in every frame, and the action scenes are nothing short of a visual spectacle. Physical comedy, which personally, often leaves me irritated, was done in a way that made me laugh. Last but not the least, there were a few adorable scenes that had the audience melting in their seats.

In the end, there were laughs and cheers in the theatre, suggesting that the film landed perfectly with its target audience. However, it is unlikely it will gain a new fan who is not familiar with the previous Despicable Me movies. Nonetheless, one thing is clear, that the minions are not going out of sight anytime soon.

Minions: The Rise of Gru, the fifth film in the franchise, released in theaters worldwide on Friday, July 1.

Denial of responsibility! TechiLive.in is an automatic aggregator around the global media. All the content are available free on Internet. We have just arranged it in one platform for educational purpose only. In each content, the hyperlink to the primary source is specified. All trademarks belong to their rightful owners, all materials to their authors. If you are the owner of the content and do not want us to publish your materials on our website, please contact us by email – [email protected]. The content will be deleted within 24 hours.
Bosscutestdespicable meentertainment newsEntertainment updateentriesGruGru mini boss
Share