Notice: amp_is_available was called incorrectly. `amp_is_available()` (or `amp_is_request()`, formerly `is_amp_endpoint()`) was called too early and so it will not work properly. WordPress is currently doing the `pre_get_posts` hook. Calling this function before the `wp` action means it will not have access to `WP_Query` and the queried object to determine if it is an AMP response, thus neither the `amp_skip_post()` filter nor the AMP enabled toggle will be considered. It appears the theme with slug `publisher` is responsible; please contact the author. Please see Debugging in WordPress for more information. (This message was added in version 2.0.0.) in /home/runcloud/webapps/techilive/wp-includes/functions.php on line 5313
 Mira Costa rallies three times to beat Birmingham for soccer title - TechiLive.in 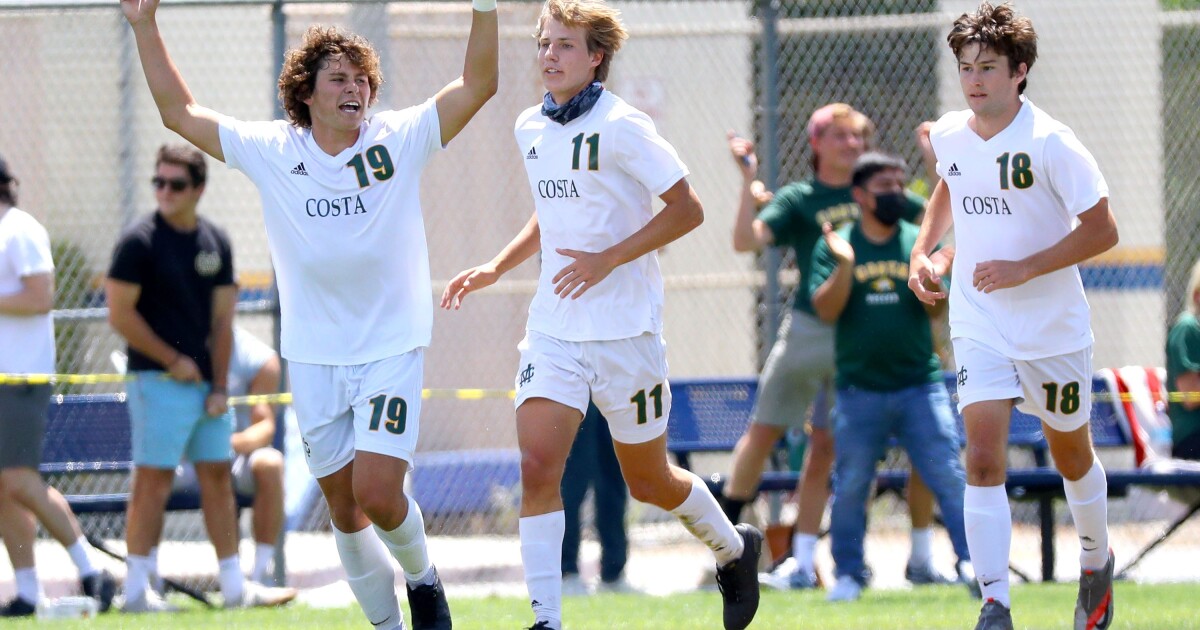 Friends since they were 5 years old while playing AYSO soccer together in Manhattan Beach, Thomas Crawford and Thomas Southey locked their sweaty arms around each other while listening to their coach on a hot Saturday afternoon in Lake Balboa.

“You guys refused to lose,” Al Brown told the players.

It was their final high school game for Mira Costa High, a team of neighborhood kids that knocked off the top-seeded team last month to win the Southern Section title, and somehow rallied three times from one-goal deficits to defeat Birmingham 4-3 in overtime on a golden goal from Tanner Mendelsohn to win the Southern California Division I regional championship.

“From where we started, it’s crazy,” Southey said. “We came together as a team and look where we are now. They were the No. 1 team in California and I guess we are now.”

Crawford’s throw-ins caused Birmingham problems all day. The fact he was even playing was a surprise. He said he might have ligament damage in his knee and had missed the last two games.

“I felt I needed to play,” he said. “This is my last high school game ever. I wanted to play until I could not.”

Michael Crisera had two goals for the Mustangs. Diego Nava, Enrique Pineda and Anthony Miron scored for the Patriots.

“I’ve known these guys for my whole life,” Crawford said. “Public schools don’t really win these things because we don’t recruit. We all play for each other and that’s what won us this. We knew we could beat them, but being down by a goal three different times it shows we have a ton of resiliency.”

Crawford, wearing a knee brace, and the other seniors were headed to the Mira Costa prom Saturday night.

Bad knee or not, Crawford said, “I’ll be dancing tonight.”

The Thompson sisters were spectacular. Sophomore Alyssa Thompson scored four goals, giving her 48 on the season. Freshman Gisele Thompson scored two goals.
There were a couple of close games this season, but Harvard-Westlake’s speed and skill left the Wolverines in a class by themselves.

There were no girls’ volleyball playoffs in the Southern Section because of COVID-19 restrictions. The City Section decided to delay its season until the spring, and that enabled Palisades to win the Open Division championship Saturday with a 25-17, 25-15, 25-18 sweep of Granada Hills.

Birmingham 101, Grant 75: The No. 2-seeded Patriots advanced to the City Section Open Division semifinals behind David Elliott, who scored 47 points. They will face Fairfax, a 72-34 winner over Granada Hills. Barry Wilds scored 26 points.

Denial of responsibility! TechiLive.in is an automatic aggregator around the global media. All the content are available free on Internet. We have just arranged it in one platform for educational purpose only. In each content, the hyperlink to the primary source is specified. All trademarks belong to their rightful owners, all materials to their authors. If you are the owner of the content and do not want us to publish your materials on our website, please contact us by email – admin@techilive.in. The content will be deleted within 24 hours.
BeatBirminghamCostaMiranews updateralliesSoccersports news
0
Share

The Best First Jobs for People Interested in Entrepreneurship