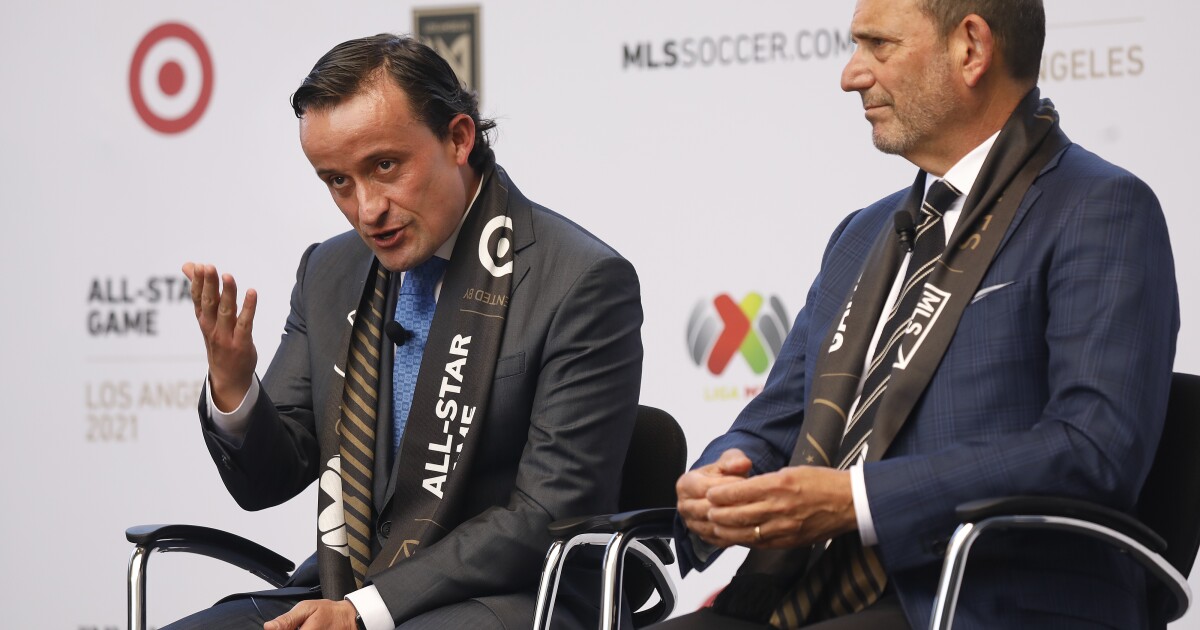 But it’s not a step away, either.

“If it makes sense at the right time, then we’ll take that step,” MLS Commissioner Don Garber said.

Until then, Garber said, the two leagues will continue their courtship and see whether it leads to marriage. In the last three years, Liga MX and MLS have partnered on two tournaments — the Campeones Cup, featuring the respective league champions, and the eight-team Leagues Cup. Now comes the Aug. 25 all-star game at Banc of California Stadium, an exhibition matching the best players from MLS against their Liga MX counterparts.

“You can do that in a variety of different ways without a former merger.”

The cooperation benefits both sides. For the 18-team Liga MX, the partnership has increased its exposure in the U.S. market while encouraging teams to professionalize their operations.

“One of the key factors for expansion in our league is expansion internationally. This market is huge for us. And it’s unique,” said Liga MX President Mikel Arriola, who said 18% of U.S. soccer fans follow his league.

“One of our main strategies is to grow in the same terms of other leagues, accumulating the fan base in the U.S. and expanding our properties with MLS. We are confident we have a very robust plan to grow jointly with MLS.”

Arriola, 45, is a former youth international in jai alai who ran an unsuccessful campaign for mayor of Mexico City in 2018. He has a master‘s degree from the London School of Economics, among other advanced degrees, and is fond of quoting statistics to support his arguments.

So when he was appointed, as an outsider, to take over as the Liga MX president in January, it was with the aim of improving the league financially and commercially through expansion and increased ties with MLS.

“We have a huge capacity to grow as a league,” he said. “And we have to have good partners. So my idea — and the idea of Don, obviously — is to grow together to expand quality in our game and have very specific goals for the short and midterm.”

For the 27-team MLS, cooperation with Liga MX gives it access to a massive Latino fanbase it has never successfully penetrated. In the just-concluded Clausura season, Univision carried more than 130 games across its family of Spanish-language networks in the U.S. and averaged 474,000 viewers, with 3.7 million tuning in for last week’s title game.

MLS typically averages about half that for regular-season games, lagging behind both the Liga MX and the English Premier League in the U.S. And the audience for last year’s MLS Cup on Fox was 1.071 million, 30% of the audience the Liga MX final drew.

Attracting even a fraction of the Liga MX audience could mean millions in increased revenue for MLS, which will see its current broadcast deal expire at the end of next season.

“Each league has its own objective,” Garber said. “The best partnerships have mutual values. Each one is bringing something to the relationship that is going to make sense or else you don’t do it. We have great confidence that we’re beginning to find values by working closely with each other.”

Denial of responsibility! TechiLive.in is an automatic aggregator around the global media. All the content are available free on Internet. We have just arranged it in one platform for educational purpose only. In each content, the hyperlink to the primary source is specified. All trademarks belong to their rightful owners, all materials to their authors. If you are the owner of the content and do not want us to publish your materials on our website, please contact us by email – [email protected]. The content will be deleted within 24 hours.
benefitsDiscussexecutivesLigaMLSmutualnews updatesports news
Share