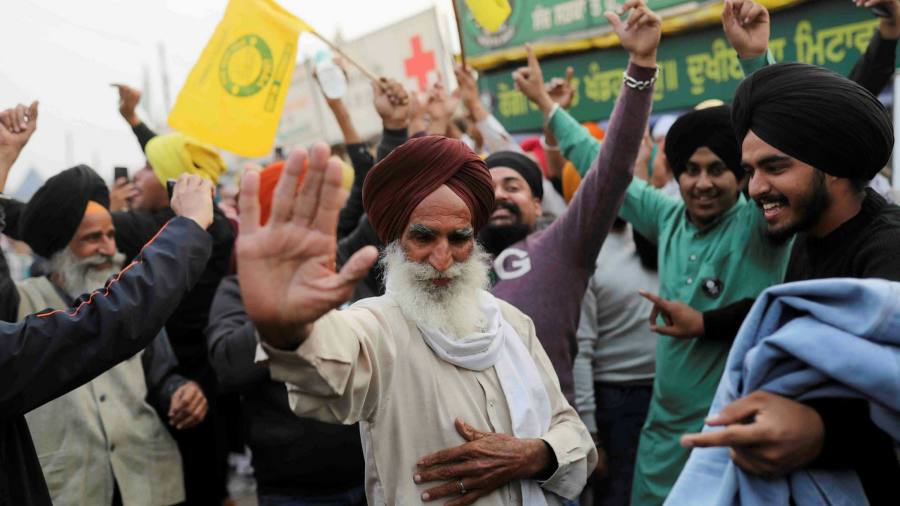 Narendra Modi never admits to missteps, even when Indians have suffered intense hardship owing to his policies. But the Indian prime minister made a rare apology last week when he made a stunning reversal by pledging to repeal contentious farm laws after a year of protests.

Modi maintained that the agricultural reforms — intended to open up the market to greater corporate participation — would have raised farmers’ incomes. But he conceded that his Bharatiya Janata party government had failed to build a consensus for changes that would have had consequences for millions.

“I want to say with a pure heart that maybe there was some shortcoming in our efforts that we could not explain to some of our farmer brothers a truth that was as clear as a flame,” Modi said in a special television broadcast.

The prime minister’s abrupt decision to roll back one of the biggest economic reforms of his second term followed a protracted political stand-off with farmers, who have blocked highways into New Delhi for a year in a show of determined force.

Analysts said the climbdown reflected the ruling party’s growing anxiety about its prospects in elections next year in Uttar Pradesh, India’s largest state and current BJP stronghold. Results in that vote will set the tone for nationwide general elections in 2024.

The BJP’s landslide victory in state elections in UP in 2017 helped the party project the image that it was an unstoppable juggernaut bound to win the 2019 general election. Modi’s party hopes to create a similar perception next year, which would help with fundraising and keep disgruntled allies in line.

But Uttar Pradesh’s farmers, especially from the more prosperous western region, have been a driving force for the anti-farm-law protests, raising the prospect they would desert the BJP. That would be a further blow to the party, already stung by a disappointing defeat in state elections in West Bengal in May.

“The election will be framed as a midterm referendum on the Modi government’s second term,” said Milan Vaishnav, director of the Carnegie Endowment for International Peace’s South Asia programme. “They don’t want to just squeak through — they want to come with a bang and create an aura of invincibility.”

Modi’s farm laws sought to open India’s tightly regulated agricultural markets to greater corporate participation, allowing companies to buy directly from farmers, and setting out terms for contract farming. The prime minister argued this would free growers from exploitative middlemen and give them more freedom to do business.

But influential landowning farming families — who have prospered by selling essential grains to the government at guaranteed prices — feared the laws were a prelude to ending the state’s procurement model and would leave them vulnerable to powerful corporate interests.

Modi’s capitulation to the farmers will hit his carefully honed image as a tough leader impermeable to public criticism. But Vaishnav said the benefits of changing course would probably outweigh the costs, given the imminent UP polls and new political opportunities in Punjab, where the ruling Congress party recently split.

“It’s smart politics,” he said. “The BJP is looking at two very important elections next year where the narrative of being anti-farmer, beholden to big business and oppressing the poor was likely to take a toll. This essentially allows them to put those talking points to bed.”

But many are sceptical that Modi’s pre-election about-face will immediately restore his once-high popularity among an influential constituency in the state of 200m. The protesters suffered severe hardships during the sit-ins, which sometimes erupted into violent clashes with police. Modi — and the BJP’s social media operation — demonised the farmers as unpatriotic terrorists and professional protesters who were undermining the country’s progress.

Economists also warn the debacle over the proposed reforms could be a long-term setback to the modernisation of India’s agricultural sector. Many say the industry needs a comprehensive overhaul to improve its economic and ecological sustainability.

“The worst possible outcome will be if people say, ‘agriculture is too much of a hot potato and you simply can’t touch it’,” said Mekhala Krishnamurthy, a senior fellow at New Delhi’s Centre for Policy Research, a think-tank. “It needs deep reforms.”

The way in which the BJP drove the bills through parliament during the Covid-19 pandemic, with little public consultation or scrutiny, reinforced suspicions and fuelled the backlash. The BJP’s longtime ally in Punjab also broke with Modi over the proposed laws and quit the government.

“The damage done is deep,” said Devesh Kapur, director of Asia Programs at Johns Hopkins University’s School of Advanced International Studies. “This is not flicking a switch. The protests went on for more than a year.” 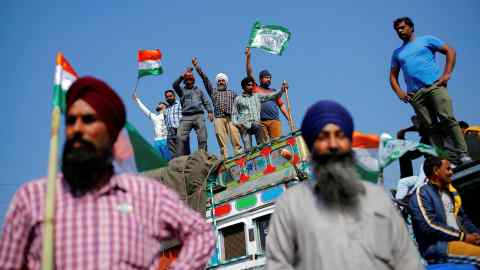 Having tasted victory, farmers intend to press for further concessions, such as enshrining a system of guaranteed public procurement — at a minimum price — into law, which would lead to a rise in already costly agricultural subsidies that some say are misdirected.

“Farmers have won a victory, but they will not vacate the border until all their demands are met,” the Bharatiya Kisan Union, or Indian Farmers’ Union, tweeted on Sunday.

But Kapur said Modi’s tactical retreat was “an olive branch” that would enable the BJP to start rebuilding its support in an influential constituency in a strategically significant region where the political opposition remains fragmented.

“You don’t have to win back all the farmers . . . you have to win back enough of them,” he said. “The BJP is going to drive home the message that ‘the PM never changes his mind, he sticks to his principles, but because of you, he has done this’. Some farmers will now give him the benefit of the doubt.”

Denial of responsibility! TechiLive.in is an automatic aggregator around the global media. All the content are available free on Internet. We have just arranged it in one platform for educational purpose only. In each content, the hyperlink to the primary source is specified. All trademarks belong to their rightful owners, all materials to their authors. If you are the owner of the content and do not want us to publish your materials on our website, please contact us by email – [email protected]. The content will be deleted within 24 hours.
anxietyEducation newsEducation updateElectionsfarminglawsloomingModis
Share

The ABCDE of Cryptos: From Avalanche to Ether