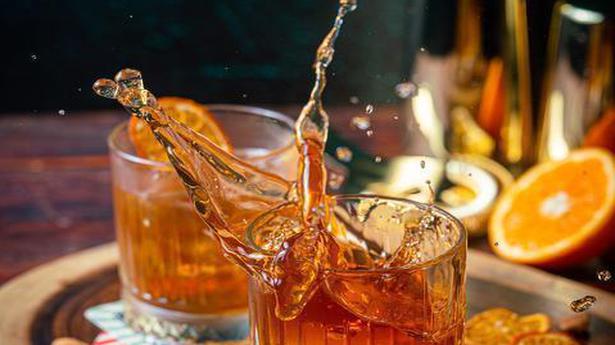 Chef Manu Chandra recalls the Bengaluru summer of 2012, when he was busy building the first cocktail menu of his then yet-to-open Monkey Bar. “My manager and I both realised that we hadn’t had a good aam panna in really long,” recalls the chef. They plucked raw mangoes, roasted them over a coal fire — “it adds that smokiness” — and turned it into the aam panna of their childhood. And from there, created mangaa, which has ruled the roost at Monkey Bars in Bengaluru, Mumbai, Delhi and Kolkata for the past nine years.

Now, try it in Chennai as the brand’s latest outlet prepares to open to the public at a sprawling indoor space in VR Chennai on April 8. In town for the launch, Manu (chef partner) and pioneering restaurateur AD Singh (founder and Managing Director of The Olive Group), discuss how they encourage diners to experiment. So while a vodka-laced rasam mary cocktail might be a hit in Mumbai’s Monkey bar, a Malabari mutton kulcha served with coconut chutney is served up in Delhi.

In Chennai, they are bringing in a wide menu including hit dishes from the other cities, as well as a few exclusive creations. For instance, six of their cocktails have been created just for this city: Pied piper (with a jeera-infused whisky base), sip me tender (based on white rum and tender coconut), imli sour (which is exactly what it sounds like), sip semma, Madras men (with coffee shrubs made in-house), and old fashioned kacheri (an almond-infused, sweet and zesty take on the classic cocktail). “We like to change our menus fairly frequently,” says Manu over a glass of mangaa, “Our team likes to be challenged.”

That statement is hardly a surprise. After all, the team behind Monkey Bar — aka Olive group of restaurants — was among the first to popularise the gastropub culture across India. Not only that, the Olive group is behind some of the most popular restaurant chains around the country, each with its distinct image, ambience and customer base — the sunny, chatty families and friends who frequent SodaBottleOpenerWala; the connoisseurs who patronise Toasts and Tonic for its myriad varieties and taste notes of, well, gins and tonics; the select fine-dining crowd that steps into an Olive Bar and Kitchen, be it Mumbai, Delhi or Goa. Then there is the Japanese-centric Guppy just in New Delhi, the widely Asian The Fatty Bao in multiple cities… the list goes on.

At Monkey Bar, as the chef explains, the idea is not to have a dimly-lit, loud pub with an elbow room-bereft dance floor, but a relaxed space with comfortable seating where the food is as important as the drinks, as the company you want to kick back with and enjoy.

Painted in typical Chennai garb against tell-tale city backdrops, monkeys gaze out at you from almost every single wall, adding a bit of pop-culture and assuring you that this is not a space that takes itself too seriously.

The layout at their VR premises reflects this, with standing tables, large booths, and tables for six, three and two set up at varying levels, in addition to the row of chairs by the curved bar. Their ample alcohol collection is in full display within a see-through storeroom beside the bar. But the first thing to grab guests’ attention is, of course, all the monkeys. Painted in typical Chennai garb against tell-tale city backdrops, monkeys gaze out at you from almost every single wall, adding a bit of pop-culture and assuring you that this is not a space that takes itself too seriously.

In pre-pandemic times, mingling was a key aspect of Monkey Bar’s operations and floor plan, and it seemed to have paid off. “It has been known for creating friendships that didn’t exist before; people met at a Monkey. We refuse to book a large table for just four people — if there is room for more guests; we insist that you share your table. I would often see two different groups share a table, and then come back as friends the next time,” says Manu, adding that even engaged and married couples have walked up to him to say that they met at a Monkey Bar. “And this no-reservation rule is for everyone,” he underlines, “We have had members of the Indian cricket team wait their turn for a table like everyone else.”

The devil’s in the details

Celebrity patronage aside, when bringing a restaurant to a new city, there are a host of little details that matter, from the humidity in its air to the softness in its water. Chef Manu explains why, with a curious little example. “I’m surprised at how under-seasoned a lot of the stuff is. Why is that?” he asked his team a day after landing in the city.

Considering that Monkey Bar has always carried a lot of the same menu items in Kolkata, Mumbai and the now-shut original Bengaluru gastropubs, this odd little difference was unexpected. “They said, ‘Chef, we’re seasoning it and seasoning it, but there is something in the water that’s impacting the seasoning. We checked, and saw that it is RO water. RO water is softened — and when it is, it gains the tendency to absorb more salt. It’s amazing how each geography shows up a fresh challenge, especially when you’re trying for consistency.” The food that did reach our table, though varied and experimental, was nothing if not utter comfort food — a creamy laksa; a thoroughly rich Chandra Ji mutton curry (Manu’s family recipe) served with fragrant gobindo bhog rice; jackfruit “tacos” made complex with the Rajasthani flavours of ker sangri; a rich chocolate cake made richer with Nutella and generous amounts of India’s favourite rum.

There was also an intriguing nod to Olive’s other popular brand, The Fatty Bao, in the form of a ghee roast paneer bao. If a telling mural near the entrance is any indication, we will be welcoming The Fatty Bao to Chennai next.

Loading...
Denial of responsibility! TechiLive.in is an automatic aggregator around the global media. All the content are available free on Internet. We have just arranged it in one platform for educational purpose only. In each content, the hyperlink to the primary source is specified. All trademarks belong to their rightful owners, all materials to their authors. If you are the owner of the content and do not want us to publish your materials on our website, please contact us by email – [email protected]. The content will be deleted within 24 hours.
baos ChennaiBarChennaiChennai cocktailChennai drinksChennai foodChennai nightlifeChennai pubs
0
Share