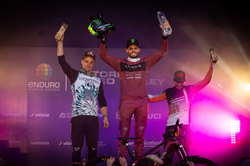 “It’s insane, man! I just achieved something that I have dreamed of and have been working towards my whole life. It still doesn’t really feel real!” – Jack Moir

“It’s insane, man! I just achieved something that I have dreamed of and have been working towards my whole life. It still doesn’t really feel real!” said Moir upon claiming his career-first EWS World Championship.

As the final highlight of the 2021 Enduro World Series (EWS) season, the Vittoria EWS Tweed Valley race was the biggest celebration of international mountain biking in the United Kingdom. Over the course of a long weekend, the event crowned new champions in men’s and women’s racing divisions, plus the electric bike category. Complementing the race action in the rolling hills of Southern Scotland, EWS Tweed Valley featured a full-fledged music and food festival.

The forest trails of Innerleithen and surrounding hills are hallowed ground for mountain bike racers. The terrain is notoriously twisted, demanding, and interspersed with steep climb sections. Adding to the challenge, intermittent rain created slick track conditions that kept riders on their toes all weekend.

Newly signed to Monster Energy’s pro mountain bike roster, Moir came to Tweed Valley after a season-long battle with American racing prodigy Richie Rude. With only 70 points on the leaderboard separating the two rivals, anything could happen in Scotland. Especially keeping in mind that Rude already made history as the first man to win back-to-back championship titles on the EWS.

In Saturday’s first Pro Stage race, the two riders finished just seconds apart, with Moir claiming the stage win on a 00:03:25.37 total time. But as it turned out, race officials found that Rude had failed to ride within the course markings, resulting in a disqualification that ended his championship run.

Recalling the first race day, Moir said: “My strategy for the weekend was to go in and do my best to keep the points lead. I was ready to battle on Friday, and had a good Pro Stage, taking the win.” When Rude was no longer competing for the overall title, it became clear that no other rider could mathematically take Moir’s top spot. “I then found out later that evening that Richie had been disqualified and I had won.”

With the title already secured, Moir continued to fight for the Tweed Valley race win during four stages on Sunday. But a hard crash and shoulder injury proved a severe setback. With Martin Maes finishing the weekend in first place overall with a 00:23:53.12 time, Moir placed fourth 00:34.05 behind.

When all was said and done, Moir’s impressive season performance – including five race wins – earned him the overall 2021 Enduro World Series Championship. The Australian took first place with 4520 season points, ahead of Richie Rude with 4015 points.

“The season was insane! It was a super tight back and forth battle with Richie every round. On top of this, I faced so much adversity, from food poisoning on a race weekend, to popping out my shoulder and mid race mechanicals. This made it that much sweeter though!”

This weekend’s EWS World Championship marks the biggest achievement in Moir’s career to date. Hailing from New South Wales, Australia, Moir first began racing motorbikes at the age of 4 and discovered mountain bike racing at 13. After turning pro in 2015, Moir became a force on the global downhill mountain bike circuit and claimed the 2016 Crankworx DH overall title. In 2020, he made the switch to racing enduro full-time.

Speaking on joining team Monster Energy, the newly crowned EWS World Champion said: “I’m pumped to be riding for Monster! It’s always been a dream growing up to be repping a Monster lid at the races. And they are always supporting such sick video projects outside of racing as well. So, I can’t wait to get something going on the content side of things.”

Now that the EWS season is officially over, what’s next for Moir? “Normally I would go home and go camping and surfing all off-season. But I’m going to have to get my shoulder fixed as soon as I’m out of quarantine. So probably a lot of chilling and rehab!” said Moir. The 2022 Enduro World Series (EWS) season will commence this coming June in the Tweed Valley, so stay tuned!

Based in Corona, California, Monster Energy is the leading marketer of energy drinks and alternative beverages. Refusing to acknowledge the traditional, Monster Energy supports the scene and sport. Whether motocross, off-road, NASCAR, MMA, BMX, surf, snowboard, ski, skateboard, or the rock and roll lifestyle, Monster Energy is a brand that believes in authenticity and the core of what its sports, athletes and musicians represent. More than a drink, it’s the way of life lived by athletes, sports, bands, believers, and fans. See more about Monster Energy including all of its drinks at http://www.monsterenergy.com.

Denial of responsibility! TechiLive.in is an automatic aggregator around the global media. All the content are available free on Internet. We have just arranged it in one platform for educational purpose only. In each content, the hyperlink to the primary source is specified. All trademarks belong to their rightful owners, all materials to their authors. If you are the owner of the content and do not want us to publish your materials on our website, please contact us by email – [email protected]. The content will be deleted within 24 hours.
ChampionCrownedEnduroEnergysJacklifestyle newslifestyle updateMoir
Share

Women’s IPL will happen at some point but having stronger domestic structure more important: Saba Karim