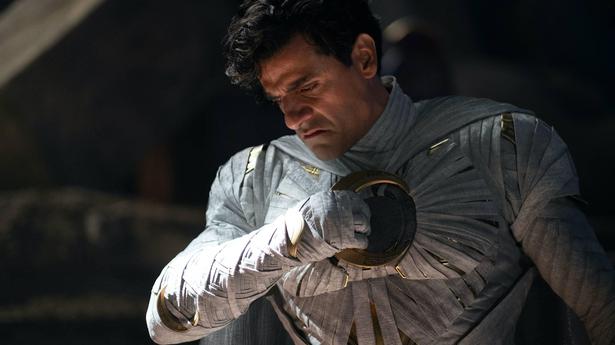 Moon Knight, the sixth television series in the MCU, begins with Bob Dylan’s born-again anthem, ‘Every Grain of Sand’. As the counterculture icon sings, “Sometimes I turn, there’s someone there, at times it’s only me,” it serves as a theme song for the protagonist, who suffers from Dissociative Identity Disorder (DID).

Oscar Isaac plays Marc Spector, who is forced by circumstances to be Moon Knight, the avatar of Egyptian moon god Khonshu (Karim El Hakim and F. Murray Abraham). While as Marc, he can draw on his mercenary training and cool suit to do many acts of derring-do, his other self, Steven Grant, is a gift shop employee working in the British Museum, complete with a dodgy working-class English accent. The accent incidentally drew a lot of derision on the Internet, which as you know is all about passing storms and rage.

Isaac, who deserves all the acting awards available for creating two distinct personalities, and switching between them in the blink of an eye, has been quoted as saying the iffy accent was deliberate and as you progress into the show, you figure out the poignant reason for it as well. Isaac used his brother, Michael Benjamin Hernandez, as a double when the different identities meet. Using different reflective surfaces for Marc/Steven to talk to each other is insightful. We have all discoursed with the person in the mirror though usually they do not disagree with us as violently and hardly ever in a completely different accent!

Moon Knight is a rather un-MCU show. While having the requisite running and jumping and big bangs, the mini-series works wonderfully well as a psychological thriller and metaphysical meditation of the mind-forged manacles. Who said William Blake has no place in a superhero film? Incidentally, Dylan has drawn on Blake’s Auguries of Innocence for ‘Every Grain of Sand’, so there.

Steven sleeps with his ankles chained to the bed post so that he does not wake up in strange lands fighting fires as Marc. Adventurer and archaeologist Layla (May Calamawy) is Marc’s wife, and is initially surprised with her husband refusing to recognise her and speaking in a weird accent.

Storyline:  Ancient gods fight for control over people’s souls through their human avatars on earth

The strangely charismatic and cultish Arthur Harrow (Ethan Hawke) was Khonshu’s earlier avatar, but has since moved over to the dark side to awaken the crocodile goddess, Ammit (Sofia Danu and Saba Mubarak), intent on dispensing her brand of justice on the world. Steven’s knowledge of ancient Egypt goes a long way in defeating Harrow’s cunning plans. Layla becomes a temporary avatar of Taweret (Antonia Salib), the hippopotamus-faced goddess of childbirth and fertility.

While the finale has enough pyrotechnics to keep action fans amused,  Moon Knight’s strength lies in its performances and genre-bending. There is a cleverness tempered with dry wit (“I’ll throw us off the cliff”) that ensures a riveting watch.

With ancient Egyptian gods slugging it out for control, it makes sense for director Mohammed Diab to go against Hollywood stereotypes and show Egyptians as what he describes as “normal people” and Egypt as a normal place. That is not to say that there is no magic; that is always shimmering just beneath the surface of all that normalcy.

Diab has said though every attempt has been made to treat DID respectfully — a board-certified psychiatrist served as consultant —  Moon Knight still exists in a fantasy world and should be perceived as such.

The mental leaps required in a world inspired in equal parts by Indiana Jones and Salvador Dali are one of the many joys of the show. Other jolly joys include the first Egyptian superhero, a darker edgier take, a sympathetic look at mental illness, and setting an action sequence to Wham!’s ‘Wake Me Up Before You Go-Go’. Tawaret as the sweetest hippo in any realm, flicking her delightful pink little ears at ancient invisible flies is the cherry on this gorgeous cake…

Denial of responsibility! TechiLive.in is an automatic aggregator around the global media. All the content are available free on Internet. We have just arranged it in one platform for educational purpose only. In each content, the hyperlink to the primary source is specified. All trademarks belong to their rightful owners, all materials to their authors. If you are the owner of the content and do not want us to publish your materials on our website, please contact us by email – [email protected]. The content will be deleted within 24 hours.
entertainment newsEntertainment updateEthan HawkeIssacKnightmanaclesmeditationmetaphysical
Share