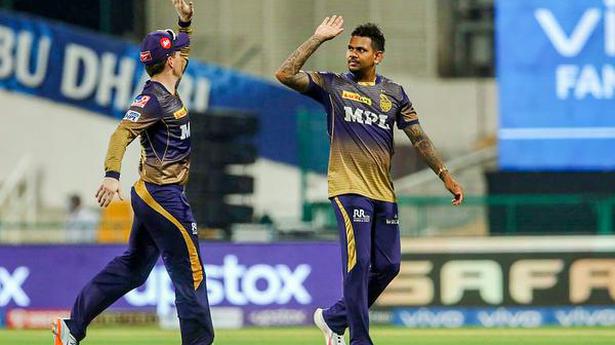 Kolkata Knight Riders captain Eoin Morgan is the first one to admit that he has been woefully short of runs throughout the IPL but is confident of finding some form with the tournament hitting the business end.

KKR are currently placed fourth with 12 points from 13 games and with a positive net run-rate will just need to win their final game to qualify for the play-offs along with CSK, Delhi Capitals and RCB.

“Yeah, I am short of runs in this phase of the tournament, the whole tournament in general. I am very lucky to be in a position where I have been through stages like this in my career,’ Morgan said after his team’s six wicket win over Sunrisers Hyderabad.

“And I think the longer you go without contributing a significant score, the closer you are to actually contributing. And that’s coming from experience,” said Morgan, who scored a total of 111 from 12 innings with a highest score of 47 not out. Speaking about Sunil Narine and Varun Chakravarthy, who have had a key role in KKR, he said the team was very lucky to have them.

“I think they are the two big impact players for us (Varun Chakravarthy and Sunil Narine). We are very lucky to have them, particularly Narine. He has been a huge part of the franchise for a long time, an integral part of KKR’s success.

“Game on game basis, you have to look at where they can have the biggest impact in the game and you try to get them in that position,” Morgan added.

Morgan was all praise for the bowling group, who restricted SRH to 115.

“The match against SRH was a good example, we are fortunate enough that the other guys in our bowling group bowled extremely well and that allowed us to juggle things around,” the KKR captain added.

The KKR captain said veteran New Zealand cricketer Tim Southee has had a good impact in the absence of key players like Andre Russell, Lockie Ferguson, Pat Cummins and the others.

“Tim’s obviously had a huge impact in the side, when you miss two or three big gun players, we miss Pat, we miss Lockie, and obviously Dre (Russell) has been missing as well. His contribution with the ball in this phase has been brilliant.

“It’s one thing contributing throughout a campaign, but I think, when you look at actually when you need players to stand up, senior players to be able to do that… Tim has done that brilliantly,” he added.

“We were here two nights ago and the ball seemed to come onto the bat. Yes, it swings early in the Powerplay and a little bit of nip, which is expected here in Dubai, but today was a little bit sluggish.

“Obviously, the wicket is one thing, you need to adapt to conditions, bowl well, field well, and we did that incredibly well,” he added.

While T20 cricket is primarily entertainment, Morgan doesn’t mind that challenging element on tracks which gives an insight to what “real cricket is all about”.

“The batsmen had to work a little bit harder (on Dubai track). I think sometimes in T20, it is nice to have that element to give an insight into the real game of cricket as opposed to the ball flying everywhere and everything in the batsmen’s favour.” Morgan praised opener Shubman Gill, who made a match-winning half-century on a sluggish track and said he has shown a great amount of promise.

“I am delighted for Shubman Gill. He has shown a great amount of promise in all formats of the game. Probably over the last two IPLs, he has continued to show promise. On a tricky wicket today, he made it look easy. His true class shone through…,” the skipper said of the young Indian batter.

Denial of responsibility! TechiLive.in is an automatic aggregator around the global media. All the content are available free on Internet. We have just arranged it in one platform for educational purpose only. In each content, the hyperlink to the primary source is specified. All trademarks belong to their rightful owners, all materials to their authors. If you are the owner of the content and do not want us to publish your materials on our website, please contact us by email – [email protected]. The content will be deleted within 24 hours.
Admitsandre russellCornercricket newscricket news livecricket resultsCSKDelhi Capitals
Share