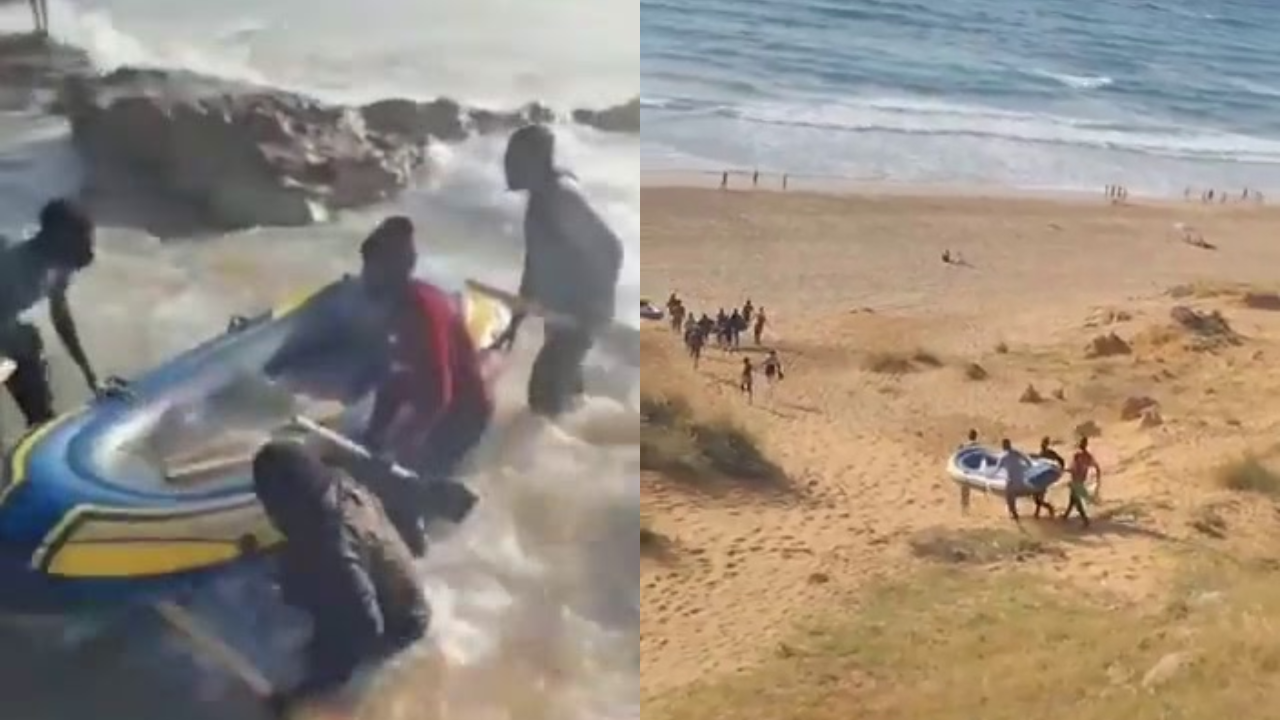 Thousands of migrants from Morocco crossed the border into Ceuta, the Spanish enclave in North Africa, on May 17. The surge in migrants came amid diplomatic tensions between Spain and Morocco, with some officials accusing the latter of intentionally loosening border controls. While some migrants took land or sea routes from towns bordering Ceuta, others took the opportunity to set off from the beaches of Tangier in boats. Our Observer Sedrick Kouayi recounts.

Videos show an unprecedented influx of migrants entering Ceuta, either by swimming or climbing border fences. May 17 represents a record number of migrant arrivals into the city in a single day, with some estimates exceeding 8,000. At least 1,500 of Monday’s arrivals were believed to be minors.

Thousands of migrants entered Ceuta by swimming around the border fence at the beach of Tarajal.

Others opted to make the journey by sea from the port city of Tangier, located only 14km from mainland Spain and around 40km from Ceuta.

Our Observer, Sedrick Kouayi, who works with the NGO Humanism Without Borders, witnessed several embarkations from Achakar Beach in Tangier, despite challenging weather conditions:

On Sunday morning, May 16, some videos began to circulate showing that there was no military security at the beaches to prevent migrants from crossing. The information gained momentum and people began to move towards the beach of Achakar, in Tangier. On Monday, May 17, when we woke up, we noticed that many people were heading to the Spanish enclave of Ceuta.

The Observers team received several videos of these departures from the coasts of Tangier.

After news of decreased security on Morocco’s borders, migrants departed from the beaches of Tangier in boats.

‘They were desperate but not scared’

The situation at the beach was tragic. I was able to see for myself the difficulties that people had at the beach to depart. The weather was very rough, with high waves. At the beach, there were families sunbathing and swimming and, on the other hand, migrants of sub-Saharan origin trying to set off by sea. Some of them were helping the distressed migrants.

The majority of the migrants who went to the beach had inflatable boats. Some people were wearing life jackets and others were wearing car inner tubes. People were excited to get on board; they were desperate but not scared.

Kouayi said these groups of migrants opted not to take the usual route from Tangier to continental Spain, due to bad weather. However, they used the opportunity provided by the lack of security personnel to set off by boat to Ceuta.

Kouayi does not know whether these groups of migrants ever managed to reach Ceuta.

Taking advantage of a lack of security personnel, migrants set off from the coasts of Tangier despite choppy seas. According to Sedrick Kouayi, fewer migrants are taking the journey by sea due to poor weather conditions.

According to Kouayi, the idea for this massive rush into Ceuta began spreading on social media over the previous weeks:

Since the beginning of the holy month of Ramadan in 2021, migrants have been talking about a possible opening of the borders by Morocco. There have been voices shared in WhatsApp and Facebook messenger groups, which have motivated some people living in non-border cities to head for the border cities.

Normally, it is impossible to set out on a boat in broad daylight on such an open beach without being spotted by the security agents, but to my surprise, there were none. The only agents present on the beach were rescue workers who helped one or two people who were about to drown.

The relaxing of Moroccan border security came amid increasing diplomatic tensions between Spain and Morocco. In mid-April, Spain granted entry to Brahim Ghali, the head of the Polisario Front, a militant group fighting Morocco to gain independence for the contested Western Sahara territory. Ghali is being treated for Covid-19 in northern Spain.

On Tuesday, May 18, Spanish troops were deployed to Ceuta to contain the influx of migrants. Armoured vehicles lined the beach as police and military continued to face off with a crowd of hundreds of migrants across the fence.

After several thousand migrants entered Ceuta, Spanish troops were deployed to the enclave. Police and military faced off at the border fence.

Videos posted on social networks show hundreds of people in the streets of Ceuta, including lines of migrants waiting at the Red Cross to be registered with authorities. Others attempted to board ships destined for the Spanish mainland.

Groups of arrivals to Ceuta gathered at the Red Cross to be registered and receive aid.

As one of the final outposts for migrants from around Africa hoping to reach the European continent, Morocco is a key player in Europe’s fight against irregular migration. The country claims to have prevented more than 70,000 attempts of “irregular migration” in 2019.

The two Spanish enclaves of Ceuta and Melilla on the African continent are primary destinations for migrants hoping to reach Europe.

According to the Associated Press, nearly half of the migrants who reached Ceuta have been expelled from the European enclave following military deployment to the border. However, the over 1,500 minors who managed to reach Ceuta are legally allowed to remain within Spain’s borders.

Denial of responsibility! TechiLive.in is an automatic aggregator around the global media. All the content are available free on Internet. We have just arranged it in one platform for educational purpose only. In each content, the hyperlink to the primary source is specified. All trademarks belong to their rightful owners, all materials to their authors. If you are the owner of the content and do not want us to publish your materials on our website, please contact us by email – [email protected]. The content will be deleted within 24 hours.
AfricaCeutaChallengingConditionsfacingHarshHealth newsHealth update
0
Share

Billy Porter reveals he’s been living with HIV for years

The pros of proso