Notice: amp_is_available was called incorrectly. `amp_is_available()` (or `amp_is_request()`, formerly `is_amp_endpoint()`) was called too early and so it will not work properly. WordPress is currently doing the `pre_get_posts` hook. Calling this function before the `wp` action means it will not have access to `WP_Query` and the queried object to determine if it is an AMP response, thus neither the `amp_skip_post()` filter nor the AMP enabled toggle will be considered. It appears the theme with slug `publisher` is responsible; please contact the author. Please see Debugging in WordPress for more information. (This message was added in version 2.0.0.) in /home/runcloud/webapps/techilive/wp-includes/functions.php on line 5313
 'Mosagallu' movie review: An impressive idea that fails to be more - TechiLive.in 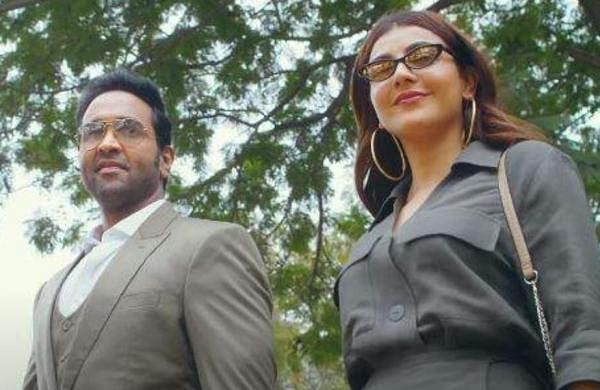 ‘Mosagallu’ movie review: An impressive idea that fails to be more

In an age when we are exposed to works like Scam 1992, The Wolf of the Wall Street, and The Big Short, morally skewed characters at the centre of stories have become more acceptable than before. Mosagallu, thus, does not try to whitewash the characters played by Vishnu Manchu and Kajal Aggarwal.

They play siblings, Arjun and Anu, who have a thirst to climb the social ladder. Hailing from an impoverished background, Arjun is stuck in a bad call centre job, while Anu has to deal with an abusive partner who refuses to grant a divorce.

When Arjun’s boss, Vijay (Navdeep) picks up on his impressive hacking skills, they get together and come up with the idea for a scam – to operate a call centre where they pose as officers from the Internal Revenue Service to scam taxpayers in the United States. The idea picks up, and how they maneuver roadblocks after this forms the rest of the story.

Mosagallu takes too much time to pique our interest. There’s an unnecessary scene at an illegal fighting pit, which just seems to be a way to tie in Suniel Shetty’s ACP Ajeet Kumar to Arjun’s world. He literally slides into the fighting pit. From there on, however, the film shows promise, as we soon get the first hints at what the story might be moving towards. Unfortunately, this promise doesn’t quite get fulfilled.

The story keeps pulling its punches, and yet it somehow holds our interests. This is despite the unnecessary scenes and very unrealistic dialogues in the first act. Though Vishnu Manchu seems to be a good fit for the role, his performance is flaky and unimpressive throughout the first two acts.

There’s a superfluous romance angle in between which brings in Mohini (Ruhi Singh). The two relationship plotlines in the film feel like they should take pointers from each other. Anu’s relationship with her partner (Ravi Prakash), while it is central to the plot, acts only as a chart of her growth. Mohini and Arjun’s relationship, meanwhile, has more scope but bears no connection to the story.

Like Mohini, many other characters also end up as deadweights. The film grossly underutilizes Viva Harsha’s character and that of Arjun’s two other pals. While Naveen Chandra is convincing as Siddhu and the role also has some interesting shades, these remain largely untapped.

Navdeep’s role as Vijay is lost to darkness at a moment when it feels natural to expect a comeback. There is also hardly any scope for Priscilla Avila as Mrs. Futterman, and that is another punch that the film pulls back.

Things eventually do look up in the third act. ACP Ajeet Kumar, who disappears for a while, returns and the film gets rivetting. Suniel is the perfect fit for the role of this top cop, and it’s refreshing that there are no over-the-top ‘mass’ action scenes to amp up the character.

Similarly, it is good to see a film that doesn’t keep cutting away to songs and keeps the focus on the narrative. If only the restraint shown in these instances had carried over into keeping the central plotline undiluted!

At its core, Mosagallu has a heartwarming brother-sister relationship which drives the narrative forward. The siblings care for each other and they refuse to put down the other, even in conflicting situations. Anu is aware of the moral corruption in Arjun’s heart and his insatiable hunger for materialistic pleasures. In one instance, Arjun even lights up his cigarettes using a currency note, that too after Ajeet refuses to get bribed. This corruption brings Arjun down, but Anu is always there to pull her brother up.

Anu is a well-written character, and unlike Vishnu, Kajal pulls off a convincing performance. Anu takes decisions independently and she always seems ahead of Arjun. After all, she was ahead even in birth, by a marginal ten seconds – a dialogue that is repeated throughout the film.

The best thing about Mosagallu is the final portion of the third act. The writing and staging here are really good. However, yet again, the film softens the blow. Given it is based on a true story, though, perhaps this ending was unavoidable.

In hindsight, the film leaves a lesser impact than it promises. With scam-based films on the rise, a film like Mosagallu has to outsmart the audience, with not just the idea of the scam involved, but also in storytelling. And that, unfortunately, is not the case here.

Denial of responsibility! TechiLive.in is an automatic aggregator around the global media. All the content are available free on Internet. We have just arranged it in one platform for educational purpose only. In each content, the hyperlink to the primary source is specified. All trademarks belong to their rightful owners, all materials to their authors. If you are the owner of the content and do not want us to publish your materials on our website, please contact us by email – admin@techilive.in. The content will be deleted within 24 hours.
entertainment newsEntertainment updateFailsIdeaimpressiveJeffrey Gee ChinKajal AggarwalMosagallu
0
Share