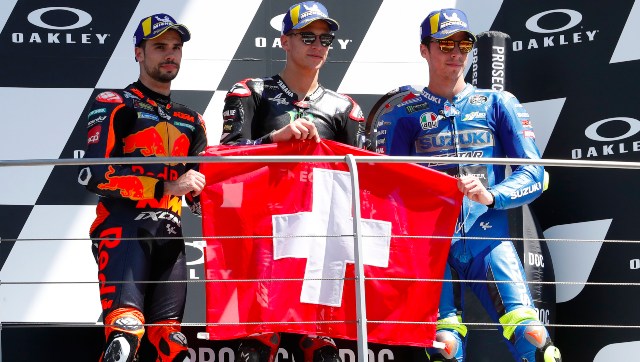 Yamaha’s French world championship leader held up a Swiss flag on the podium in honour of a ‘friend’ whose promising young career was cut short in brutal fashion.

Yamaha’s French world championship leader held up a Swiss flag on the podium in honour of a “friend” whose promising young career was cut short in brutal fashion.

“This one’s for Jason,” said Quartararo.

The Swiss teenager’s death was announced around midday by MotoGP organisers.

“On behalf of the entire MotoGP family, we send our love to his team, his family and loved ones. You will be sorely missed, Jason. Ride in peace,” the statement added.

Dupasquier, in his second season in Moto3, fell and was struck by at least one bike, before sliding along the track, during qualifying, at turn nine, on Saturday.

Doctors rushed to the scene and after attending to him for 40 minutes on the circuit had him airlifted to hospital.

The rider described as “a leading light of Swiss motorsport” passed away in hospital in Florence after suffering severe brain damage and undergoing chest surgery overnight.

Quartararo said: “It was a strange day, a lot of emotion, every time I passed turn nine I was thinking about Jason.

“It’s not a great feeling, you achieve a win but we lose one of our friends.”

Quartararo crossed the line with over two and a half seconds of daylight back to Portugal’s Miguel Oliveira in second, with reigning world champion Joan Mir completing the podium.

The sixth leg of the season was preceded by a minute’s silence for the sport’s first fatality since Luis Salom died in practice at the Catalonia Moto2 Grand Prix in Barcelona in 2016.

As the MotoGP roadshow persevered despite the tragic circumstances, it was Quartararo, who had set a new lap record when securing pole on Saturday, who emerged with his third win of the season to tighten his grip on the riders’ standings.

He now has a 24-point cushion over Zarco with Francesco Bagnaia, an early faller Sunday, a further two points back in third and Australian Jack Miller, winner of the two races before Mugello, in fourth.

Miller was among a legion of the sport’s leading figures to pay tribute to Dupasquier, the Australian Ducati rider posting on Twitter: “Rest In Peace Jason, thinking of his family and team” alongside a red heart.

Rest In Peace Jason, thinking of his family and team. ❤️ https://t.co/00uirjqPpe

The Careggi hospital in Florence treating Dupasquier confirmed to AFP that the teenager had suffered brain injuries “incompatible with life”.

“Following a serious incident in the Moto3 Qualifying 2 session at the Gran Premio d’Italia, it is with great sadness that we report the passing of Moto3 rider Jason Dupasquier,” it read.

“Despite the best efforts of circuit medical staff and all those subsequently attending to the Swiss rider, the hospital has announced that Dupasquier has sadly succumbed to his injuries,” the statement continued.

His team, Pruestel GP, had already pulled out of Sunday’s race, and Tom Luthi, a Swiss Moto2 rider, also withdrew to be close to Dupasquier’s family at the hospital.

Japan’s Ayumu Sasaki and Spaniard Jeremy Alcoba were the others involved in the horrific accident. Organisers reported that both were “fine”.

Dupasquier, whose father Philippe was a former motocross rider, was in his second season in Moto3.

Racing for his German team he finished his rookie Moto3 campaign last year pointless in 28th in the overall standings.

The FIM joint statement noted: “Dupasquier had made an impressive start to his second season in the lightweight class of Grand Prix racing, consistently scoring points and within the top ten in the standings.

“The FIM, IRTA, MSMA and Dorna Sports pass on our deepest condolences to Dupasquier’s family, friends, team and loved ones.”

Denial of responsibility! TechiLive.in is an automatic aggregator around the global media. All the content are available free on Internet. We have just arranged it in one platform for educational purpose only. In each content, the hyperlink to the primary source is specified. All trademarks belong to their rightful owners, all materials to their authors. If you are the owner of the content and do not want us to publish your materials on our website, please contact us by email – [email protected]. The content will be deleted within 24 hours.
CircuitDeathdominatesDupasquierSportsFabioFirstpostgloomyItalian
0
Share

What is EMDR? The ‘bizarre’ therapy helping Prince Harry heal