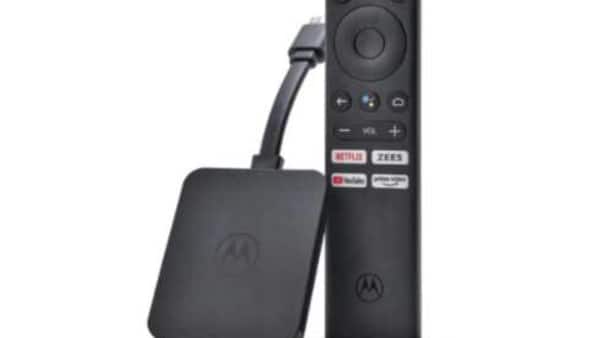 Motorola on Monday launches its 4K Android TV Stick in India at ₹Rs. 3,999,. The product is slated to go on sale in the third week of March exclusively on the e-commerce platform Flipkart, the company said. With the launch of Motorola TV stick, the company is expected to take on Mi Box 4K and the Amazon Fire TV Stick 4K, which are already existing in the Indian market.

The Motorola 4K Android TV supports 4K HDR video streaming at 60fps. Under the hood, it is powered by a 2GHz Cortex A53 quad-core chipset paired with 2GB RAM and 16GB internal storage. The 4K Android TV stick runs Android 9 Pie out of the box and hence, has Google Chromecast and Google Assistant built-in.

Moreover, since it’s running Google’s Android, the device houses Google Play Store, which can be used to download other app compatible with your smart TV and stick. Those include streaming apps such as Netflix, Amazon Prime Video, Zee5, YouTube. The device also comes with dedicated keys for these on the remote.

What’s more, the device plugs into the HDMI port of televisions, and functions as a standalone device with smart connectivity through Wi-Fi and Bluetooth.