Notice: amp_is_available was called incorrectly. `amp_is_available()` (or `amp_is_request()`, formerly `is_amp_endpoint()`) was called too early and so it will not work properly. WordPress is currently doing the `pre_get_posts` hook. Calling this function before the `wp` action means it will not have access to `WP_Query` and the queried object to determine if it is an AMP response, thus neither the `amp_skip_post()` filter nor the AMP enabled toggle will be considered. It appears the theme with slug `publisher` is responsible; please contact the author. Please see Debugging in WordPress for more information. (This message was added in version 2.0.0.) in /home/runcloud/webapps/techilive/wp-includes/functions.php on line 5313
 'MTV Movie and TV Awards 2021': Here is the complete list of winners - TechiLive.in 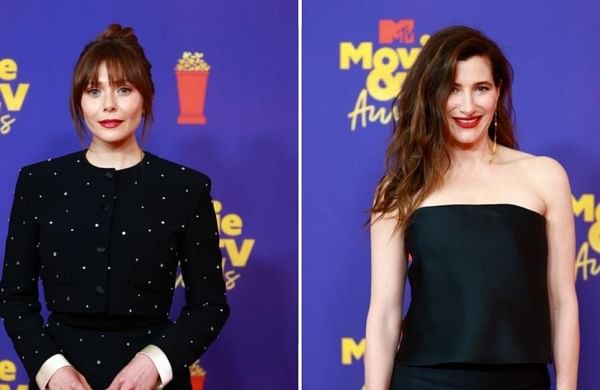 ‘MTV Movie and TV Awards 2021’: Here is the complete list of winners

‘Wanda Vision’ won four awards during the ceremony, including best series and best performance in a TV show for Elizabeth Olsen, who called Marvel fans the “best.”

According to The Hollywood Reporter, the winners were announced in a ceremony that aired live from the Palladium in Los Angeles, with Leslie Jones serving as host.

Per The Hollywood Reporter, after a montage in which she spoofed various shows, Jones came out onstage in a T-shirt that read “You have to choose joy” and sparkly black leggings along with Nike high-tops. However, she had walked the red carpet earlier in a bright red strapless gown with a thigh-high slit.

During the award ceremony, Olsen was a double winner, taking home the award for the best fight along with Kathryn Hahn for ‘WandaVision’.

The host of the award ceremony -Jones- also won the award for best comedic performance for ‘Coming 2 America.’ She accepted the award in a flowing yellow gown surrounded by dancers inspired by the performances in the film.

Chadwick Boseman posthumously won the best performance in a movie for ‘Ma Rainey’s Black Bottom’, following his surprise loss at last month’s Oscars. He earned a standing ovation from the audience.

Presenter Yara Shahidi accepted on his behalf, saying the actor’s “impact is everlasting and we are eternally grateful for the ways his presence and his art has changed the world. We love you and we miss you.”

Other winners included Chase Stokes and Madelyn Cline of Netflix’s ‘Outer Banks’ for best kiss. The duo continued the tradition of winners re-enacting their kids onstage for fans at home. Victoria Pedretti won the most frightened performance for ‘The Haunting of Bly Manor.

To All the Boys: Always and Forever (WINNER)Borat Subsequent Moviefilm: Delivery of Prodigious Bribe to American Regime for Make Benefit Once Glorious Nation of KazakhstanJudas and the Black MessiahPromising Young WomanSoul

On Monday, MTV will air its inaugural ‘MTV Movie & TV Awards: Unscripted’. RuPaul’s Drag Race tops nominees for that ceremony with four, followed by ’90 Day Fiance’, ‘Bling Empire’, ‘Legendary’, ‘Love & Hip Hop: Atlanta’, ‘Nailed It!’, ‘Ridiculousness and The Challenge’, all of which scored two nominations each.

Denial of responsibility! TechiLive.in is an automatic aggregator around the global media. All the content are available free on Internet. We have just arranged it in one platform for educational purpose only. In each content, the hyperlink to the primary source is specified. All trademarks belong to their rightful owners, all materials to their authors. If you are the owner of the content and do not want us to publish your materials on our website, please contact us by email – admin@techilive.in. The content will be deleted within 24 hours.
awardscompleteentertainment newsEntertainment updateListmovieMTVMTV movie awards 2021
0
Share