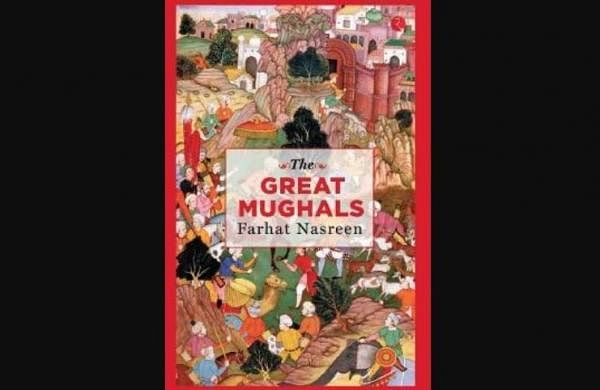 My relationship with history is romantic: Farhat Nasreen on writing ‘The Great Mughals’

Professor of History at Jamia Millia Islamia, Farhat Nasreen has published a new book The Great Mughals (publisher: Rupa). The book encompasses the stalwarts of Mughal Empire from Babur to Bahadur Shah Zafar. It charts the origin, rise, success and downfall of an empire that ruled India for three centuries.

One will find myths and mysteries of the Mughal times, including narratives about its courts and harems, bazaars and battlefields, blood and gore, and the gloss and glamour of the Empire. Nasreen previously penned Kashful Baghaavat Gorakhpur – a rare eyewitness account of the Revolt of 1857 – along with several monographs and articles on historical themes, including the much acclaimed, If History Has Taught Us Anything.

Please introduce us to The Great Mughals.
The Great Mughals is a term used to describe the most powerful of the Mughal emperors; Babur, Humayun, Akbar, Jahangir, Shah Jahan and Aurangzeb. Their empire played the double role of being a modern version of an ancient state and an ancient version of the modern one. Like players of the Rubik’s cube, they twisted and turned their policies to create the Mughal brand. Raw power supported their sovereignty but only just. They made a great play of spirituality to unify people of their multi-religious empire. Eventually, the Mughal brand grew to command an almost unbelievable brand loyalty even as late as 1857.

Could you reflect on the research you undertook for this book?
My relationship with history is romantic, which made the research easy. I read most of the primary and secondary sources relevant to the Mughals. Grasping of the significance of sub themes like economic and social history, etc., is critical because many pieces complete the jigsaw. To situate the Mughal Empire as a microcosm of the medieval times, reading non-Mughal histories was equally vital. My father; a judge by profession and my teachers taught me to hold on to facts and then approach history from various angles. It is only then that one can see a new fantastic point of view.

What are the certain paradigms of history writing that an author should consider before bringing out a title?
A historian must be watchful of the statics and dynamics of the past and present. Characters of the past were implicated in the power relations of their own times. Therefore, using current standards to judge, criticise or mythicise them could be unfair. Likewise, deconstructing time frames and labelling them as good or bad can be tricky. With the passage of time it becomes difficult to retrieve the past, luckily the historians are trained to recover it. They must spend the treasures of memory-facts and interpretations in such a way that they can buy peace and humanism.

How has history shaped your life?
More than anything else, history has taught me to be humble. It has shown that the countless riches of the rich perished, blood of celebrated bloodlines spilled unaccounted, blinding dazzle of glory faded away and so on. It has taught me to value what I have now, because I may not have it forever. History extracts the truth and presents it before decision makers – individuals who decide for themselves and leaders who often decide for many. It maintains a logbook of choices made and prices paid. It reminds us that nothing is free.

Are you working on any new book?
Yes, I do hope to present more writings on history. Besides, there is the idea of ‘Omnipresent Past’ which argues that past is the most everlasting thing. A simple anecdote from one’s childhood brings an instant smile on the most unsmiling of faces. Each passing second adds to its immeasurable volume. Present speeds towards the future, but both are eventually overtaken by the phenomenon of passage of time and get converted into the past. I feel each of the Mughal rulers deserves a book that contextualises their lives in the present-day scenario.

Denial of responsibility! TechiLive.in is an automatic aggregator around the global media. All the content are available free on Internet. We have just arranged it in one platform for educational purpose only. In each content, the hyperlink to the primary source is specified. All trademarks belong to their rightful owners, all materials to their authors. If you are the owner of the content and do not want us to publish your materials on our website, please contact us by email – [email protected]. The content will be deleted within 24 hours.
Loading...
Farhat NasreenJamia Millia Islamialifestyle newslifestyle updatenews updatetechi live
0
Share