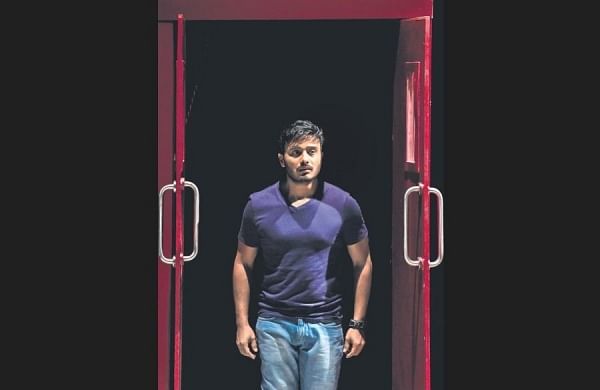 ‘My role as Vikram is relatable to all middle-class households’: Sunil Raoh

Director Hemanth Kumar’s Thurthu Nirgamana brings together two interesting actors Sunil Raoh and Raj B Shetty as part of the ensemble cast that also consists of Sudha Rani, Achyuth Kumar, Hitha Chandrashekar, and Samyuktha Hegde among others. The dark comedy marks the comeback of Sunil.

The title of the film means Emergency Exit and has an interesting premise: what happens when a person is given a chance to relive the last few days of his life. In a conversation with CE ahead of the film’s release on June 24, the two actors open up about the film. Sunil Raoh was last seen in Premism which was released in 2010. When asked about the long hiatus he explains,

“I wanted to take a small break because I felt I was getting monotonous. I planned to get back to acting much earlier, but it was delayed further by 6 to 7 years. Finally, after 12 years, I am back. However, I did a web series called Loose Connection, which brought me back to the silver screen.” Sunil notes the biggest change in the film industry that happened during his absence is the shift from film to digital cameras.

“Earlier, with films, there was a lot of pressure on the actors and technicians because we worried about wasting film reels. So, we would take more than 2 or 3 takes and we didn’t make too many mistakes. With the advancement in technology, people from different walks of life can come and follow their passion. Our director, Hemanth Kumar is one of the best examples.

He’s an engineer, who has quit his job because he wanted to make films. On the flip side, I feel things are taken for granted today because of the ease in filmmaking.” When probed about his role, Sunil reveals, “My role, Vikram, is relatable to all middle-class households. He is an intelligent guy with a laid-back attitude. He has no value for time and life, leads an aimless life, and is happy to be stuck in a rut. What happens when such a person faces an emergency and has no choice but to act? That’s the crux of this story,” says Sunil Raoh.

Talking about acting with a happening actor like Raj B Shetty, he says it was not intimidating though he has not been acting for a while. “I never felt insecure in my life, because I never had any great ambition of becoming a star. With whatever projects I have done, I built an image of a good enough actor and got the recognition of the people. Moreover, Raj is not one of the actors, who wants to go one up and stay ahead.

We shared some intense scenes and our off the- screen chemistry helped us do well. It was a learning experience for me, which translated very well on the screen. Whenever two actors come together for a film, there should be a sort of chemistry between them for the film to work. I admire co-artistes who are open to discussions as it makes my job interesting and easy,” he says.

Sunil was also in praise of the director Hemanth Kumar. “The director has made such a good film that we should all be proud. I’m happy that the Kannada industry is getting another important director and someone who can contribute to the industry’s growth.” Sunil will officially announce the next project after the release of Thurthu Nirgamana.

Denial of responsibility! TechiLive.in is an automatic aggregator around the global media. All the content are available free on Internet. We have just arranged it in one platform for educational purpose only. In each content, the hyperlink to the primary source is specified. All trademarks belong to their rightful owners, all materials to their authors. If you are the owner of the content and do not want us to publish your materials on our website, please contact us by email – [email protected]. The content will be deleted within 24 hours.
dark comedyEmergency Exitentertainment newsEntertainment updateHemanth Kumar’shouseholdsSunilMiddleClassnews update
Share

Watch: Bihar man suffers from an uncommon disease, sheds his skin every week like a snake

Decades after Brown v. Board, US schools still struggle with…