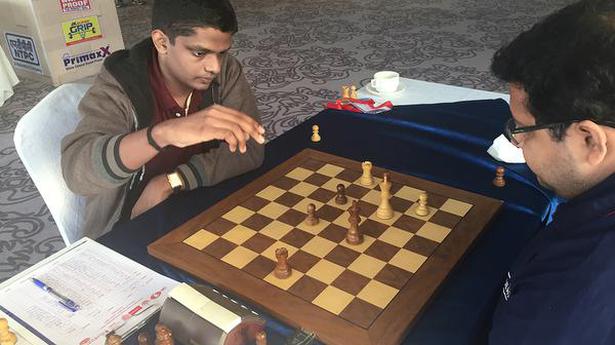 ‘I would have wanted to play in more events, but am selective because of lack of funds’

After enjoying a fair amount of success in online chess tournaments during the pandemic, Grandmaster S.L. Narayanan has shifted his focus to regular tournaments in a bid to reach the magical figure of 2700 points.

Last month, the 23-year-old, whose current rating is 2624 points, finished second in the RTU Open Chess tournament in Riga, Latvia. In a tough tournament, Narayanan drew the last round with Israeli GM Ilia Smirin to finish second behind Germany’s Alexander Donchenko.

The RTU Open was the second regular tournament which Narayanan participated in this year after the Bangladesh league in March. Narayanan will take part in the Sharjah Masters next week.

“The goal is to reach 2700 points as quickly as possible. I am satisfied with my performance in the RTU Open. The tournament had some strong players, and considering my ranking, a podium finish was a good show indeed.

“The Bangladesh League was a good experience as I played along with GMs from other countries and got to know them personally. It was also my first off-line tournament, and I am happy that I could help my team finish second in the league,” he said.

“I would have wanted to play in more tournaments, but I am forced to be selective because of lack of funds.

“I have been using my prize money to fund my trips to tournaments. So I only take part in tournaments in places which are not very expensive.

“Sharjah Masters will be my next stop. It is a good tournament with some strong players and I hope to do well there,” said Narayanan, who is ranked sixth in India.

Narayanan feels that full-time employment will, to some extent, put an end to his financial woes. “These days I cannot afford to have private coaching sessions.

“But I do analyse my games with my fellow GMs and sometimes with coach Gregory. It is difficult to get a sponsor for a chess player in Kerala. But things could change for the better if I get a job,” said Narayanan.

He also expressed surprise that the State Government failed to acknowledge him in the last five years, during which he became Kerala’s second GM and won multiple medals at national and international tournaments.

Denial of responsibility! TechiLive.in is an automatic aggregator around the global media. All the content are available free on Internet. We have just arranged it in one platform for educational purpose only. In each content, the hyperlink to the primary source is specified. All trademarks belong to their rightful owners, all materials to their authors. If you are the owner of the content and do not want us to publish your materials on our website, please contact us by email – [email protected]. The content will be deleted within 24 hours.
Loading...
crackhopesNarayanannews updatepointssports newssports updatetechi live
Share