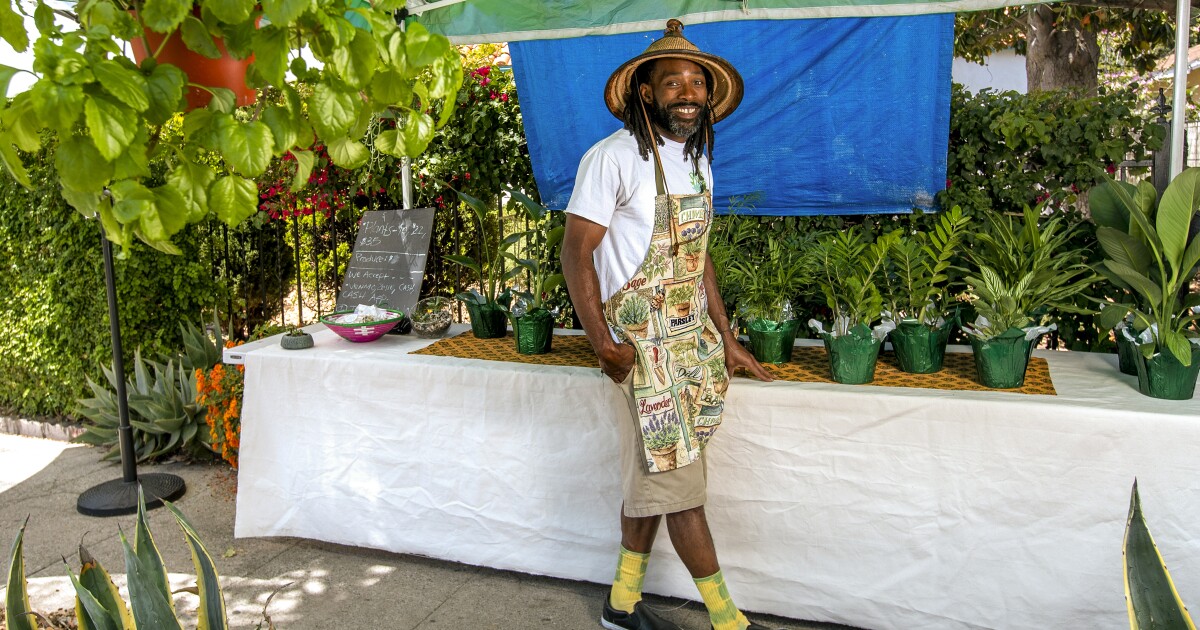 In our Plant PPL series, we interview people of color in the plant world. If you have suggestions for PPL to include, tag us on Instagram @latimesplants.

In the late 1990s, Louis Easton was a sulky teen when his horticulturist father introduced him to plant care and merchandising. Back then, helping his dad restock and freshen nursery displays as he made his rounds to stores like Home Depot and the now-defunct Home Base was not exactly his idea of fun.

“Plants weren’t hip; I thought they were cheesy, something for old people,” Easton said. “I just wanted to be a kid, playing football and hanging with my buddies. I didn’t understand that he was giving me an opportunity.”

But somewhere along the way — after small acting roles, a filmmaking degree and jobs making TV shows and videos — that early plant exposure took root and grew into Easton’s present-day persona. He’s now known as the Plant Mon, a decidedly hip “plant concierge” who selects the right plants for his customers’ environments — and then delivers a curated mini-store to their homes so they can choose which plants they want to bring inside.

That’s just one of his services. He also offers plant care advice and demonstrations via Instagram (@theplantmon) and sells a variety of houseplants online, which he delivers for free in Los Angeles County. His digital book “Five Air Purifying Plants You Should Have in Your Home Today” came out in paperback in June. And he’s happy to diagnosis plant problems at no charge from his pop-up tent at farmers markets and businesses.

Easton took the name Plant Mon in part because he loved the lush green of Jamaica when his family visited on vacation, but there’s also this: “In the Black community, if you say you work like a Jamaican, it means you wear many hats. And that’s me.”

Around 2014, Easton became fascinated with farmers markets and decided to reenter the plant world as a vendor selling houseplants and vegetable seedlings as a side gig called Easton Garden Designs.

Over the next few years he got more and more involved with plants, even visiting middle schools to talk about the importance of urban farming and giving demonstrations at public libraries about houseplants and terrariums. So when he was furloughed from his job making educational films about water conservation and composting, and the lockdown created a kind of plant frenzy, Easton was more than ready to answer the call. He just had to find a way to get plants to those who either were too busy to go shopping or didn’t feel comfortable being among crowds.

“I just put myself in my customer’s shoes,” he said. “If you’ve been out in traffic all day, it’s so stressful; the last thing you want to think about is getting back in the car and shopping for plants. But if you don’t have to bust a grape, if you can just sit there and let the grape come to you … who wouldn’t want that?”

The concept was simple: Easton asked his customers a few questions on the phone and then brought a carload of curated plants to their location for them to browse and buy. The phone started ringing.

Two years later, despite soaring gas prices, Easton is still making deliveries for free (with a minimum plant purchase of $25), but his larger focus is now on “interior plantscaping” — he’ll go into homes and businesses to recommend the best plants for the situation. He’ll also provide collections of plants for friends who want to gather at someone’s house and shop. You can connect with Easton without an appointment too. During the pandemic, he set up a tent outside his Highland Park home, selling houseplants and other products, but that’s tapered off since he’s increased his presence at farmers markets in Highland Park, Crenshaw and the new Los Angeles River Farmers’ Market in Los Angeles State Historic Park in Chinatown.

Oh, and he’s got another side gig, making educational films for municipalities through his company Good Sides in partnership with his brother-in-law Joe Letke. And then there was that modeling gig with J Crew this spring that featured him with his plants outside his home.

Working in public, his energy and charisma are magnetic, with people regularly stopping at his tent to discuss his glossy plants or shouting questions from their cars.

It’s a busy life, full of creative work, and he credits all that hustle to the lessons he learned from Louis Easton III.

His dad started his career in sales in Ohio, Easton said, driving routes to deliver bubblegum, mouthwash and potato chips before moving his family to California and studying horticulture at Mount San Antonio College and Cal Poly Pomona. He wanted out of junk food, Easton said, and into a healthier lifestyle that still used his expertise in sales, so he began working for wholesale nurseries, delivering and selling plants to garden centers.

“He’d have 10 to 16 Home Depots and that would be his route,” Easton said. “They give you the space and you have to work it. You have to clean up the plants and make sure the displays look good, remove any that are dying or restock to fill gaps from stuff that sold. It’s almost like your own business.”

When Easton was old enough, his dad hired him during summers to fix displays on four or five of the stores on his route. It saved his father gas and time, for him to take part of his route, Easton said, but it also gave his son a purpose and model that shaped his life.

“I’m so glad I had a father like that, who could see something I couldn’t see,” Easton said. “As a young African American man, the things in front of us were usually sports and entertainment, but scientists, botanists, master gardeners … they were never highlighted in popular culture. I’m just thanking my dad for steering me into this.”

Eventually, Easton hopes to make use of his performance/entertainment side for his own TV show — “I only think colossal” — regarding something to do with plants in Southern California. He has the chops for being the host, judging from his soothing, deep-voiced tutorials on Instagram and YouTube and the pix from his stint as a Creative Spirits model for J Crew’s spring 2022 collection (featuring plants from his own 2022 plant collection).

But for now he’s just keeping very busy, dispensing advice to plant pros and newbies alike. If you’re just starting out, here are the top five houseplants Easton recommends in his book as bulletproof — easy to grow (aka hard-to-kill) plants that can help cleanse the air while beautifying your home and lifting your spirits.

“This plant is also known as mother-in-law’s tongue and sansevieria. It’s so amazing, it’s almost immortal; if you take a leaf, cut it in half and stick it in a jar with water, it will propagate,” Easton said. Snake plants release their oxygen at night, so consider them for a room where someone is sleeping. They can survive four weeks without water, but it’s best to water them twice a month, with an occasional misting since these jungle plants prefer humidity and filtered light. Keep them out of direct sun and use a moisture meter to water only when the soil is dry, Overwatering leads to root rot, he said, and that’s the quickest way to kill this otherwise very hearty plant.

The spikey marginata — also known as a dragon tree — is another plant that just needs water every two weeks or so, when the soil is dry, Easton said. This is a great plant to fill an empty, well-lighted corner of a room because it can grow up to 6 feet tall, but this plant hates temperature extremes, so keep it out of direct sunlight and away from heating and cooling vents. He recommends dusting the plant periodically to keep the slender leaves clean, or once every few months giving the plant a good shower in the bathtub, to wash off the dust.

The corn plant, as it’s commonly known, is a handsome plant prized for its ability to thrive in low-light situations. “You usually see it in hospitals hugging a corner,” Easton said. The plant prefers low, indirect light but can even survive under florescent lighting. Be sure to keep the leaves dusted so the plant can breathe, Easton said, and water only when the soil is dry; usually every other week, he said, but when in doubt, it’s better not to water than over-water.

These vining plant can dangle from a high cupboard, bookshelf or macramé planter; just be sure to keep it out of direct sunlight, Easton said. Pothos loves a regular spritzing of water on its leaves, he said, but to avoid root rot don’t water the soil until it’s dry. This plant propagates very easily — just cut off a branch and let it root in water, he said. It’s good for absorbing stale odors too, which is why you frequently see them in restrooms.

Easton loves the big, boat-shaped leaves of bird of paradise plants, but the houseplant variety aren’t likely to bloom; they need lots of sun to flower. Easton recommends spritzing the majestic leaves a couple times a month and wiping them down with a cotton cloth and leaf shine product “so you can enjoy paradise in the comfort of your own home.”

Here are some more notes on houseplant care from Easton, who discusses all these plants in greater detail in his book:

If you want any of these plants delivered, you know who to call.

Denial of responsibility! TechiLive.in is an automatic aggregator around the global media. All the content are available free on Internet. We have just arranged it in one platform for educational purpose only. In each content, the hyperlink to the primary source is specified. All trademarks belong to their rightful owners, all materials to their authors. If you are the owner of the content and do not want us to publish your materials on our website, please contact us by email – [email protected]. The content will be deleted within 24 hours.
callConciergeDeliveryhippesthouseplantL.A.slifestyle newslifestyle update
Share

Make the Diagnosis: She’s Too Young for Lines on Her Face

Kohli returns as India bowl in 2nd ODI against England