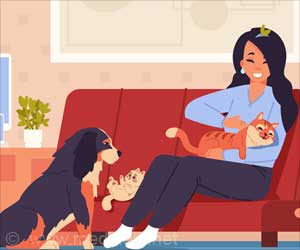 To overcome this obstacle, the team developed a machine learning model that combined data on the biological traits of 5,400 mammal species with available data on ACE2. The findings are published in Proceedings of the Royal Society.

The goal is to identify mammal species with high ‘zoonotic capacity’, the ability to become infected with SARS-CoV-2 and transmit it to other animals and people. The method they developed could help extend predictive capacity for disease systems beyond COVID-19.

Co-lead author Ilya Fischhoff, a postdoctoral associate at Cary Institute of Ecosystem Studies, comments, “SARS-CoV-2, the virus that causes COVID-19, originated in an animal before making the jump to people. Now, people have caused spillback infections in a variety of mammals, including those kept in farms, zoos, and even our homes. Knowing which mammals are capable of re-infecting us is vital to preventing spillback infections and dangerous new variants”.

When a virus passes from people to animals and back to people it is called secondary spillover. This phenomenon can accelerate new variants established in humans that are more virulent and less responsive to vaccines.

Secondary spillover of SARS-CoV-2 has already been reported among farmed mink in Denmark and the Netherlands, where it has led to at least one new SARS-CoV-2 variant, which allows SARS-CoV-2 to transmit potentially more infectious strains to people.

The model found that the riskiest mammal species were often those that live in disturbed landscapes and proximity to people – including domestic animals, livestock, and animals that are traded and hunted.

The top 10% of high-risk species spanned 13 orders. Primates were predicted to have the highest zoonotic capacity and strongest viral binding among mammal groups. Water buffalo, bred for dairy and farming, had the highest risk among livestock.

People working near high-risk mammals should take extra precautions to prevent SARS-CoV-2 spread. This includes prioritizing vaccinations among veterinarians, zookeepers, livestock handlers, and other people in regular contact with animals.

More efficient iteration between computational predictions, lab analysis, and animal surveillance will help us better understand what enables spillover, spillback, and secondary transmission – insight that is needed to guide zoonotic pandemic response now and in the future.

Denial of responsibility! TechiLive.in is an automatic aggregator around the global media. All the content are available free on Internet. We have just arranged it in one platform for educational purpose only. In each content, the hyperlink to the primary source is specified. All trademarks belong to their rightful owners, all materials to their authors. If you are the owner of the content and do not want us to publish your materials on our website, please contact us by email – [email protected]. The content will be deleted within 24 hours.
Covid-19Covid19Health newsHealth updateLearningmachineMammalsModel
Share

BTS: When Jimin pretended to be RM and Suga’s girlfriend to help compose a freestyle rap apology, watch