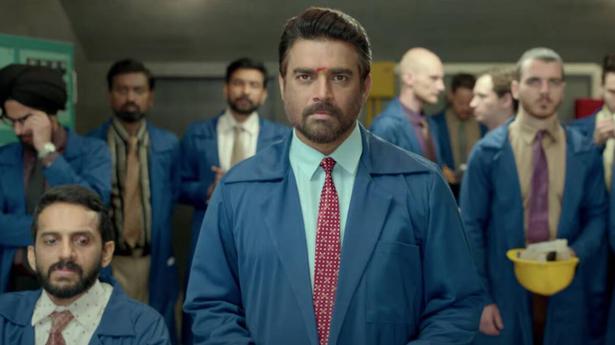 New on Amazon Prime Video: ‘Rocketry’, ‘The Batman, ‘The Odd Couple’, and more

Here is the full list of new titles on the platform:

Based on the life of ISRO Scientist Nambi Narayanan who was framed for espionage and imprisoned in 1994, the film chronicles his achievements, his passion for the country’s space mission, his unmatched dedication and the accusation that eventually became the biggest personal and professional setback of his life. R Madhavan plays that titular role apart from writing, directing, and producing the film.

A few hours after 1988 Halloween night, four 12-year-old girls — Erin, Mac, Tiffany, and KJ — have to face a mission. Transported into the future to save the world, these girls must figure out how to return home to the past, a journey that will bring them face-to-face with the grown-up versions of themselves. Paper Girls stars Camryn Jones, Riley Lai Nelet and Riley Lai Nelet in the lead roles

When a sadistic serial killer begins murdering key political figures in Gotham, Batman is forced to investigate the city’s hidden corruption and question his family’s involvement. The film stars Robert Pattinson, Zoë Kravitz and Jeffrey Wrigh in the lead roles

A still from ‘The Batman’
| Photo Credit: Amazon Prime Video

This musical adventure of three bird friends is set in the musical world of Beebopsburgh, an island where instruments grow in the Falsetto Forest and a giant Music Mountain towers above all their adventures. Kristen Bell, Jackie Tohn and Luke Youngblood voice the lead roles.

Sayen is an action thriller which follows the story of Sayen, a Mapuche woman who lays a conspiracy against the people who have tried to destroy her family land and the ecosystem in Latin America. The film stars Rallen Montenegro, Arón Piper and Roberto Garcia

Following the events of Halloween, Surviving victims of Michael Myers form a vigilante mob and vow to end his reign of terror after they discover that he is still alive. The film stars Jamie Lee Curtis, Judy Greer and Andi Matichak in the lead roles A father’s coming to grips with his daughter’s upcoming wedding through the prism of multiple relationships within a big, sprawling Cuban-American clan. Starring Andy Garcia, Gloria Estefan, and Adria Arjona, the film is a rollercoaster ride filled with fun, music, comedy and food.

After being kicked out of their houses by their wives, two friends try to share an apartment, but their ideas of housekeeping and lifestyles are as different as night and day. Matthew Perry and Thomas Lennon play the lead characters in this series. A group of criminals are brought together under mysterious circumstances and have to work together to uncover what’s really going on when their simple job goes completely sideways. Directed by Steven Soderbergh, the period crime drama stars Don Cheadle, Benicio del Toro, and David Harbour in lead roles. A still from ‘And Just Like That…’
| Photo Credit: Amazon Prime Video

Tells the story of Michael Peterson, a crime novelist accused of killing his wife Kathleen after she is found dead at the bottom of a staircase in their home, and the 16-year judicial battle that followed. The true crime series is headlined by Colin Firth and Toni Collette.

Denial of responsibility! TechiLive.in is an automatic aggregator around the global media. All the content are available free on Internet. We have just arranged it in one platform for educational purpose only. In each content, the hyperlink to the primary source is specified. All trademarks belong to their rightful owners, all materials to their authors. If you are the owner of the content and do not want us to publish your materials on our website, please contact us by email – [email protected]. The content will be deleted within 24 hours.
AmazonAmazon Prime releases August 2022batmanCoupleentertainment newsEntertainment updateNew releases Amazon Prime July 2022New releases Amazon Prime this week
Share

Inadequate KYCs: Sebi lays down rules for deactivation of accounts

ELA Games releases its new “Wild Piranha” slot to its…

IND vs AUS: Playing a tour game on Indian pitches is…