Notice: amp_is_available was called incorrectly. `amp_is_available()` (or `amp_is_request()`, formerly `is_amp_endpoint()`) was called too early and so it will not work properly. WordPress is currently doing the `pre_get_posts` hook. Calling this function before the `wp` action means it will not have access to `WP_Query` and the queried object to determine if it is an AMP response, thus neither the `amp_skip_post()` filter nor the AMP enabled toggle will be considered. It appears the theme with slug `publisher` is responsible; please contact the author. Please see Debugging in WordPress for more information. (This message was added in version 2.0.0.) in /home/runcloud/webapps/techilive/wp-includes/functions.php on line 5313
 New Zealand bowling coach relishing De Grandhomme's contest with Root - TechiLive.in 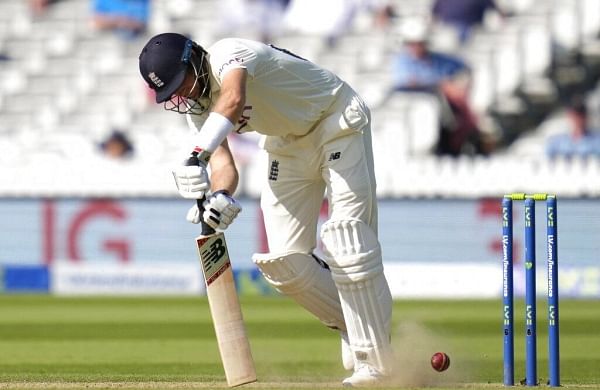 De Grandhomme’s eye-catching mullet hairstyle was in danger of obscuring the all-rounder’s effectiveness as an accurate medium-pace bowler.

But having dismissed Root when the teams last met at Lord’s in England’s thrilling Super Over win in the 2019 World Cup final, de Grandhomme struck him on the right hand with a rearing delivery on Thursday that left the Yorkshire batsman requiring treatment.

But Root (42 not out) survived until stumps, sharing an unbroken stand of 93 with opener Rory Burns (59 not out) to take England to 111-2 in reply to New Zealand’s first innings 378 built on debutant opener’s Devon Conway’s superb 200 — the highest score by a batsman making his Test bow in England.

Root and de Grandhomme may well be in direct opposition when play in the first of this two-match series resumes on Saturday, with Jurgensen saying: “It’s great to watch. Colin certainly presents a challenge for Joe.

“Joe’s a fantastic player he’s a very good captain, but it’s a great battle. Me personally, I love watching it from up on the balcony.”

Jurgensen added: “With Colin, he’s someone who can either swing it or seam it, you may see 115 to 125 kmh (71-78 mph) but Colin when he hits the cricket ball, he’s extremely strong, so he does bowl a heavy ball.

“I think that’s why you saw (on Thursday) he had the ball jumping up and down, maybe keeping low, and also some movement.

“He’s very accurate and presents a good challenge for all batters.”

As for who had the upper hand, Jurgensen said: “It’s pretty even.

“The World Cup final, Colin got his wicket there but at the same time with Colin against all batters he certainly tests your patience, he added, with New Zealand guaranteed of another appearance in a showpiece match after this series after qualifying to face India in the inaugural World Test Championship final at Southampton later this month.

“It will be a good challenge for them to go against each other (on Saturday).”

Persistent rain meant neither side gain an advantage at the ‘home of cricket’ on Friday in a match that marks the return of spectators to international cricket in England after last season’s fixtures were played behind closed doors because of coronavirus restrictions.

But Jurgensen insisted there was enough time left to force a result, with 98 overs, rather than the standard 90, now scheduled for Saturday following the third-day wash-out.

“There’s certainly enough time in the game to push for a possible result,” Jurgensen said.

“You’ve always got to believe you can still be in the frame to push for a result but we just have to try our best and believe we can win.

“The advantage for us is that we’ve got the runs on the board and that’s always good to have to be in front at this stage of the game in terms of the runs.

Denial of responsibility! TechiLive.in is an automatic aggregator around the global media. All the content are available free on Internet. We have just arranged it in one platform for educational purpose only. In each content, the hyperlink to the primary source is specified. All trademarks belong to their rightful owners, all materials to their authors. If you are the owner of the content and do not want us to publish your materials on our website, please contact us by email – admin@techilive.in. The content will be deleted within 24 hours.
Loading...
BowlingCoachColin de GrandhommecontestGrandhommesJoe Rootnews updateRelishing
0
Share