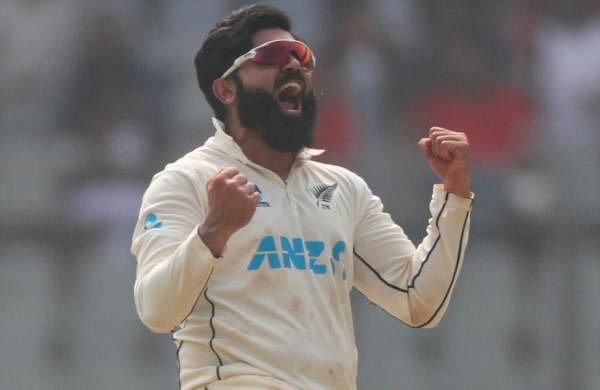 WELLINGTON: Spinner Ajaz Patel, who is one of only three players to have taken 10 wickets in a Test innings, will return to the New Zealand cricket team for its three-test tour to England next month. Patel joined Jim Laker of England and Anil Kumble of India in an elite club when he took 10-119 in New Zealand’s second Test against India in Wankhede in December.

The left-armer hasn’t played a Test since. He was left out of tests against Bangladesh and South Africa at home last summer as New Zealand opted for all-pace attacks. Patel returns as New Zealand’s front-line spinner for the England series.

New Zealand on Wednesday named an extended 20-man squad for the tour, designed to cover the early absence of players involved in the Indian Premier League. Those players will miss New Zealand’s warm-up matches and the squad will be trimmed to 15 before the first test against England starting June 2 at Lord’s.

New Zealand beat England 1-0 when the teams last met in a test series in England last year, prior to New Zealand’s win over India in the final of inaugural World Test Championship. The current squad includes 13 of the 15 players who took part in that series.

Batsman Ross Taylor and wicketkeeper BJ Watling have both since retired. The squad includes offspin allrounder Michael Bracewell, wicketkeeper-batsman Cam Fletcher and pace bowler Blair Tickner, who will be touring with New Zealand for the first time.

Captain Kane Williamson will rejoin the side at the end of the IPL. He played the first test against India last year but hasn’t played a test match since because of an elbow injury. Opener Will Young and allrounder Colin de Grandhomme currently are playing county cricket in England and their availability might force additional changes before the final squad is named.

“All going to plan we will have everyone fit and available for the first Test at Lord’s and aim to announce our final squad of 15 for that series once we’ve completed our warm-up games,” head coach Gary Stead said.

Stead said New Zealand has to carefully manage its player resources at the start of a busy run of red and white ball cricket. “The red ball tour of England first up is clearly high on our priority list and we’re looking forward to hitting the ground running over there in a couple of weeks’ time,” he said.

“Touring England is always a special occasion with the people, the grounds and the history all making for a wonderful experience. The English are always tough in their own conditions and have many talented players they can call on,” he said.

New Zealand will face and England team with a new coach and captain. Rob Key has taken over as head coach and New Zealand-born allrounder Ben Stokes as captain.

Denial of responsibility! TechiLive.in is an automatic aggregator around the global media. All the content are available free on Internet. We have just arranged it in one platform for educational purpose only. In each content, the hyperlink to the primary source is specified. All trademarks belong to their rightful owners, all materials to their authors. If you are the owner of the content and do not want us to publish your materials on our website, please contact us by email – [email protected]. The content will be deleted within 24 hours.
20manAjazajaz patelenglandEngland vs New ZealandnamesNew Zealand cricketNew Zealand squad
Share

IPL 2022: We needed to come out of our comfort zone, says Hardik Pandya on Gujarat Titans’ decision to bat first against Punjab Kings | Cricket News – Times of India

Google App to Explore Effect of Smartphones on Mental Health

Sanjana Sanghi giving it her all to Dhak Dhak, learns to…