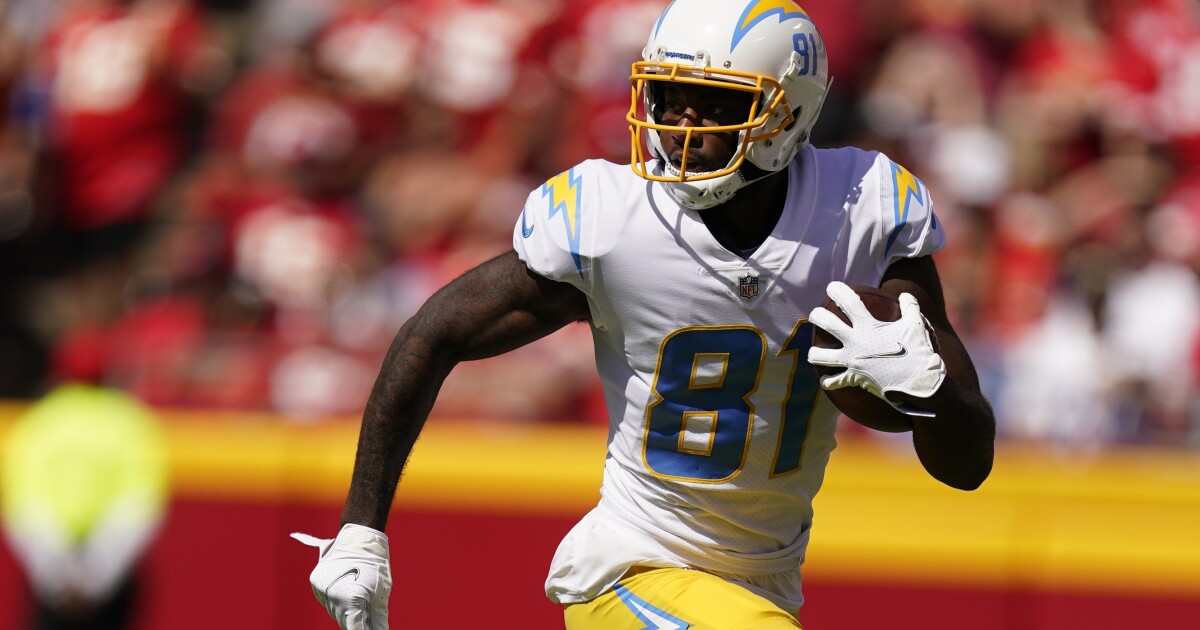 He was a wide receiver at East Tennessee State and then briefly in the Canadian Football League.

Chris Beatty is in the NFL now, an assistant with the Chargers, coaching taking him places playing never could.

As the man who oversees the team’s receivers, Beatty has experienced up close the sharp rise of Mike Williams, the physically blessed wideout off to the finest start of his career.

“If I had been anything like him,” Beatty said with a laugh, “I might not be coaching right now because I wouldn’t have to.”

Williams is on the fifth-year option of his rookie contract, an option that pays him $15.68 million for the season. That’s the highest base salary among the 2021 Chargers and, at this point, it would be difficult to argue Williams isn’t worth the money.

He entered Week 4 sixth in the NFL with 295 yards on 22 receptions. Only the Rams’ Cooper Kupp had more receiving touchdowns than Williams’ four. He was tied for second in the number of catches that netted first downs.

“He’s done a really good job as far as learning the system and being a guy who makes minimal mistakes,” Beatty said. “But he can get more comfortable in this scheme. I think he can be a lot better.”

On Monday against Las Vegas, Williams will have a chance to showcase this updated, upgraded version of himself as the Chargers and Raiders meet in the NFL’s lone game — in prime time.

“The atmosphere is like a playoff atmosphere,” wide receiver Keenan Allen said of playing on Monday night. “Obviously, everybody’s watching. The lights is on.”

The Chargers are operating new offenses and defenses this season, the sweeping changes part of a transition that saw only two assistants retained after Anthony Lynn was fired as head coach in January.

No player on either side of the line of scrimmage has benefited more than Williams, who has gone from being regarded as mostly a deep threat to being an option all over the field.

He already has set single-game career highs in receptions (eight versus Washington in Week 1) and yards (122 versus Kansas City in Week 3). His 12 targets against Washington were one short of his best.

The production is more in line with what was projected for Williams when the Chargers used the No. 7 pick on him in the 2017 draft. Coming out of Clemson, he had just produced a 98-catch, 1,361-yard season.

Williams reached 1,001 yards for the Chargers in 2019 but did so on only 49 receptions, a rather pedestrian total that remains his career high.

While he led the NFL with a per-catch average of 20.4 yards that season, the 6-foot-4 Williams gained fame for his ability to out-jump defenders on deep heaves from Philip Rivers.

The play became his signature, one that was — to Williams’ detriment — written in indelible ink.

“I was a little surprised, yes,” Beatty said when asked about Williams never catching as many as 50 passes in a season. “We view him differently. We view him as a guy that’s more of a volume guy than maybe he’s been viewed in the past.”

When Brandon Staley replaced Lynn, he hired Joe Lombardi to be his offensive coordinator. Coming from New Orleans, Lombardi said he decided “pretty much right away” to expand Williams’ role.

He placed Williams in the “X receiver” position, the spot Michael Thomas manned while becoming a back-to-back All-Pro for the Saints starting in 2018.

Typically lined up on the short side of the field, Williams can use his big body to gain position on defenders. He also has benefited from quick-strike passes from quarterback Justin Herbert.

“If you went into a lab and said, ‘OK, let’s come up with an ‘X receiver’ — body, skill type, all those things,” Beatty said, “Mike Williams is probably what a lot of teams would draw up as the prototype.”

Given his past usage, Williams catching passes near the line of scrimmage and turning shorter throws into longer gains has landed as a bit of a revelation this season.

At his current pace, he’ll reach 50 receptions by the end of the Chargers’ seventh game. Coupled with Allen, he has presented Herbert with a second every down option.

“Everyone gets stereotyped a little bit or typecast, so to speak, in L.A., right?” Beatty said. “I think it’s been that way with him, with people now playing him over the top so much.

“What we’ve been able to do so far is take advantage of that and show that there’s more range in his game than just the 50/50 ball down the field. I mean, he’s a big dude, an immediate matchup problem.”

And, eventually, maybe a problem for the Chargers, too. If he continues producing at these levels, Williams will be in line for a significant contract extension this offseason.

The Chargers should have the cap space, but they already have one wide receiver, Allen, on an extension worth up to $80 million and could be looking to extend safety Derwin James Jr., as well.

“It’s not something that he really dwells on,” Beatty said. “Mike’s one of the most unassuming guys you’ll ever meet. But, yeah, I think everybody can see he’s got an opportunity to do some great things.”

Denial of responsibility! TechiLive.in is an automatic aggregator around the global media. All the content are available free on Internet. We have just arranged it in one platform for educational purpose only. In each content, the hyperlink to the primary source is specified. All trademarks belong to their rightful owners, all materials to their authors. If you are the owner of the content and do not want us to publish your materials on our website, please contact us by email – [email protected]. The content will be deleted within 24 hours.
awarebigChargersdefensesMikenews updateNFLproblem
Share

Most kids keen to go back to school: Countingwell survey