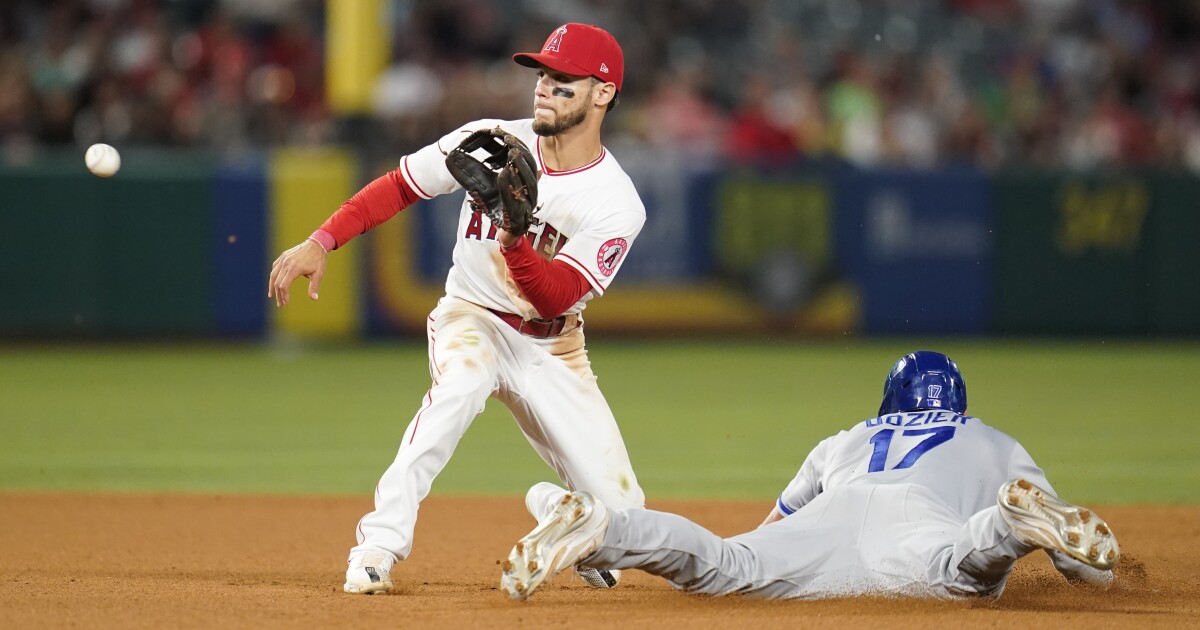 Noah Syndergaard gets little help in Angels’ loss to Royals

Noah Syndergaard gave an overworked Angels bullpen a much-needed breather Monday night, throwing 71/3 innings against the Kansas City Royals after relievers had combined for 19 innings in a five-game, four-day series at Seattle.

The Angels’ offense did no such favors for Syndergaard, mustering two runs and seven hits in a 6-2 loss before 22,234 at Angel Stadium, their three-game winning streak snapped by a last-place team with a 24-42 record.

An aberration this wasn’t. Mike Trout might be the hottest hitter in baseball, but an Angels offense that hit .250 with a .747 on-base-plus-slugging percentage and averaged 4.7 runs per game in April and May is hitting .202 with a league-worst .590 OPS and 207 strikeouts and averaging 2.75 runs in 20 games in June.

Syndergaard did what he could to keep the Angels in the game. He was tagged for two runs in his first four pitches. Whit Merrifield led off the game with a single and Andrew Benintendi drove a two-run homer to right field for a 2-0 lead before Syndergaard blanked Kansas City on two hits from the second through fifth.

Taylor Ward pulled the Angels even with a solo homer in the third and an RBI single in the fifth, but Nicky Lopez’s two-out RBI double in the seventh gave the Royals a 3-2 lead and Salvador Perez knocked Syndergaard out of the game with a booming two-run homer to center in the eighth for a 5-2 lead.

Royals left-hander Kris Bubic, who entered with an 0-4 record and 8.36 ERA, gave up two runs and six hits in six innings, striking out seven and walking two, for his first win of the season.

Matt Duffy made his fifth start at third base in the seven games the Angels have played without Anthony Rendon, who underwent season-ending surgery Monday to repair a dislocated tendon in his right wrist.

Rendon, who has provided minimal return so far on the seven-year, $245-million investment the Angels made in him before 2020, also had his 2021 season cut short by a right hip injury in early July.

“Obviously, it’s disappointing news,” Angels general manager Perry Minasian said before Monday’s game. “I feel really bad for him. He was really motivated to have a big season for us. It was something he tried to play through, which a lot of guys wouldn’t have, but it was too painful.”

Minasian is exploring a possible trade for a third baseman — “We’re always trying to improve, short term, long term,” he said — but the right-handed-hitting Duffy figures to get the bulk of the starts there for now, with the left-handed-hitting Tyler Wade filling in. David Fletcher would be a strong third base candidate when he returns from adductor surgery in July.

Neither Duffy nor Wade can impact a game on both sides of the ball like Rendon, a standout defender who hit .228 with a .707 OPS, five homers and 24 RBIs in 45 games this season and hit .319 with 34 homers and 126 RBIs for the World Series-winning Washington Nationals in 2019.

“Those are very difficult shoes to fill,” Minasian said. “The quality of the at-bat … he’s one of those guys who plays to the scoreboard. He does what needs to be done in big moments. We’re definitely going to miss his presence.”

Duffy, who hit cleanup Monday, has hit more than five homers in a season only once in seven years. He won’t provide much power, but he entered Monday with a .276 batting average, he has shown good plate discipline and makes consistent contact.

“He’s not going to blast a bunch of home runs,” interim manager Phil Nevin said, “but he’s gonna give you a good at-bat in the middle of the order and make [pitchers] work like you know you’ve got to work to get through Anthony Rendon.”

Denial of responsibility! TechiLive.in is an automatic aggregator around the global media. All the content are available free on Internet. We have just arranged it in one platform for educational purpose only. In each content, the hyperlink to the primary source is specified. All trademarks belong to their rightful owners, all materials to their authors. If you are the owner of the content and do not want us to publish your materials on our website, please contact us by email – [email protected]. The content will be deleted within 24 hours.
AngelsLossnews updateNoahroyalssports newssports updateSyndergaard
Share