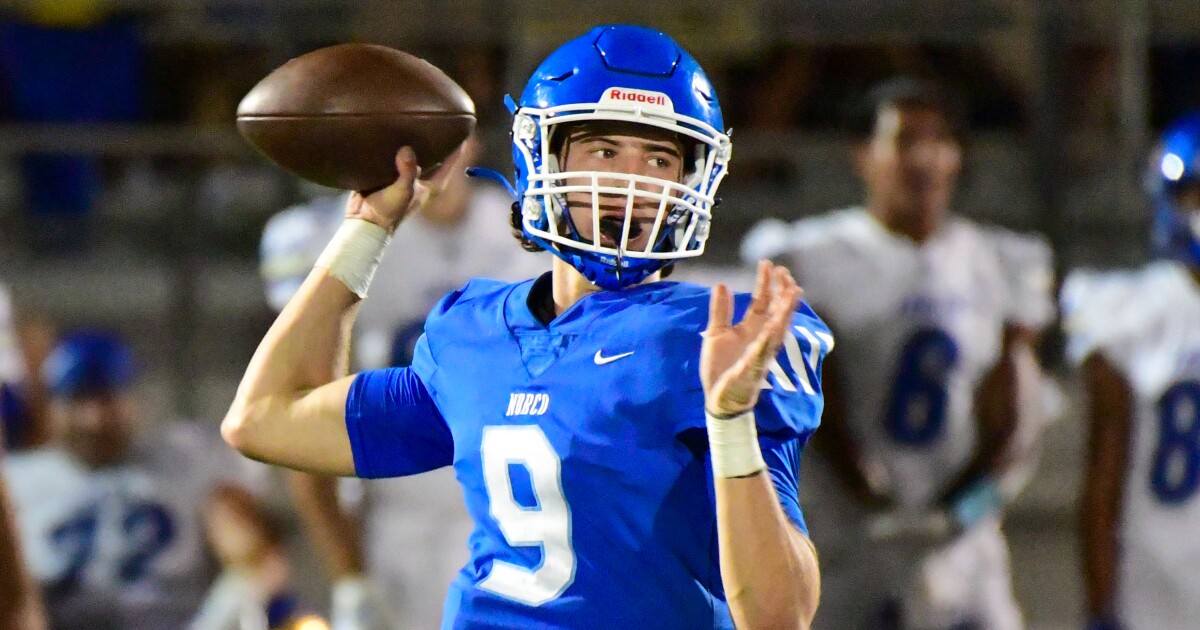 In the hills near Riverside, a few hundred yards from farmland and stables, a diamond in the rough shines on the football field from Norco High every Friday night.

His name is Kyle Crum. To those who have been watching the quarterback the last two seasons, he is a diamond in plain sight.

They describe him as a bona fide leader, captaining Norco to a win over Corona Centennial for the first time since 2009. They speak in reverence of his football IQ, spending hours watching film outside of practice hours and carrying a 4.0 GPA. They describe him as a natural improviser, unleashing an arsenal of jukes, spin moves, pump-fakes and sidearm throws.

Yet this gem of a player has yet to be truly unearthed. The 6-foot-4, 190-pound quarterback, to the bafflement of coach Chuck Chastain, hasn’t received a single college offer.

“I really don’t know what the hang-up is,” Chastain said. “He’s about as button-up as they get, and gives you everything he’s got. So we’re a little taken aback at this point on how to help him get there … we know it’s going to happen.”

Crum has thrown for eight touchdowns against just one interception while leading Norco to a 3-0 record to start his senior season, adding four scores on the ground. Yet he’s being labeled as a mere three-star recruit, to the chagrin of trainer Murad Tolbert.

Not much fazes Crum, though. Deficits, charging defenders, recruiters not making offers. Crum bounces back from it all with the same golden-boy smile, hand through wavy blonde hair, and quiet confidence.

“I just try to control what I can control,” said the quarterback, who along with his teammates has this week off before a Sept. 17 game against visiting Murrieta Valley.

He’s been doing that since he began taking snaps his sophomore season behind Shane Illingworth, now a quarterback for Oklahoma State. From the moment Crum stepped foot on campus, Chastain said, he assumed a leadership role.

To this day, Crum still brings a notebook to his sessions, begs Chastain to watch clips with him, and watches about 6-10 hours of film on his own outside of practice, the coach estimated. Crum came to know Norco’s offensive system so well that in a playoff game his sophomore year, with a depleted receiving corps, the coaching staff deployed him as a pass-catcher.

“We didn’t have to teach him anything,” Chastain said. “He was just able to step in and run the system like he’d been playing receiver his whole life. So as a sophomore, we knew there was something special there.”

Crum assumed the quarterback reins last season and broke out, throwing 14 touchdowns and running for five in a shortened spring schedule.

His rushing ability and leadership were on display in the victory over Centennial. In a key moment, facing a fourth down with four yards to go, Crum looked toward the sideline and called off the punt team, Chastain recalled. Give me the ball, the quarterback said, promptly darting ahead for 10 yards and a first down.

“I think the thing that stands out the most — at this point underrated by the guys that are scouting him — is his ability to improv,” Chastain said. “He sees things before they happen … it’s a stretch here, but he’s got a (Patrick) Mahomes ability to him.”

Crum shrugged off the comparison.

“Whenever things don’t go right, instead of just getting rid of the ball, I like to try to see what I can make out of it,” Crum said. “We end up getting a lot of big plays out of it, because defenses aren’t prepared to cover for five seconds and then come up and make a tackle.”

He’s had more success than ever as a dual threat. Tolbert, who has worked with Crum since he was a sophomore, said he’s now approaching the line of scrimmage with a knowledge of how to bend defenses to his will.

“Now, he’s actually able to use that 4.0 GPA that he has, to fall in line with what he’s able to do athletically,” Tolbert said.

In his second game of the season against Santa Margarita, Crum put his potential and ability to improvise on display. Late in the first quarter, he pulled the ball down and ran into a wall of defenders, who slammed him to the turf after the whistle, drawing a flag.

Looking irritated, he reared back in the pocket a few plays later, pulled the ball down briefly, then double-pumped a throw across the middle for a 78-yard touchdown to a Eli Rodriguez. He lofted a couple more beautiful throws for scores during the game to lead Norco to a 40-22 win, capping the night off with a Superman dive into the end zone for a fourth-quarter rushing touchdown.

He even punted a few times, one kick pinning Santa Margarita at its four-yard line. With their special teams struggling, Crum approached Chastain a couple days before the game and proposed the idea.

Heck, Crum would probably punt in college if it came to that. Or play receiver, like he did sophomore year. His goal is just to get his school paid for, he said; he’ll do whatever it takes to help his team win.

But with his loyalty and leadership, his coaches feel Crum has a future as a quarterback at the next level — and possibly beyond.

“I’m just hoping that someone finally invests and gives him a shot,” Chastain said, “because they’re going to get a heck of a guy.”

Denial of responsibility! TechiLive.in is an automatic aggregator around the global media. All the content are available free on Internet. We have just arranged it in one platform for educational purpose only. In each content, the hyperlink to the primary source is specified. All trademarks belong to their rightful owners, all materials to their authors. If you are the owner of the content and do not want us to publish your materials on our website, please contact us by email – [email protected]. The content will be deleted within 24 hours.
CrumgameKylenews updateNorcosnoticepolishesrecruiters
Share

Big Tech made billions during ‘war on terror’: report