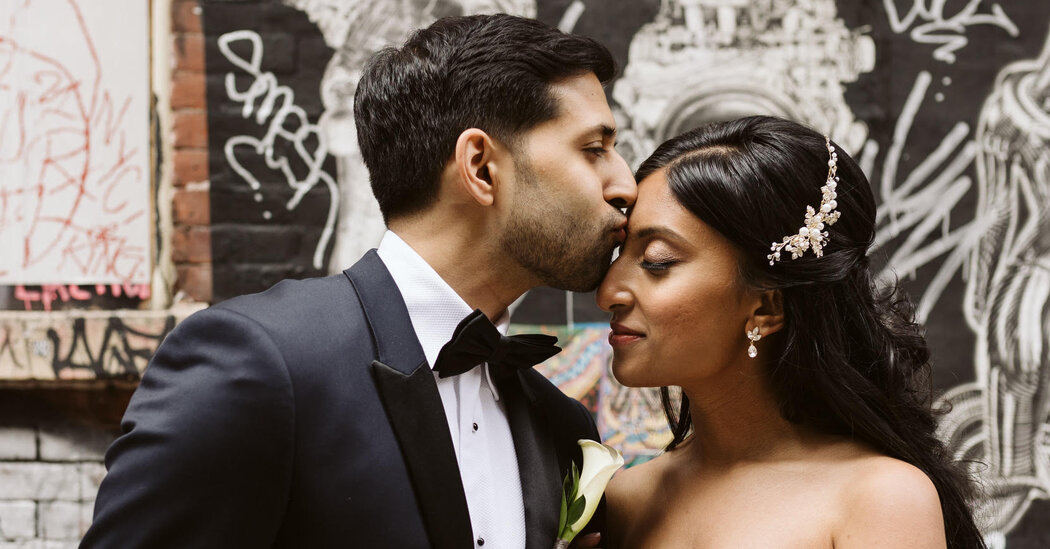 Not-So-Long-Distance Relationship Is Bridged by a Proposal

New Brunswick, N.J., is fewer than 50 miles from New York City, but for Dr. Marianne Jacob and Andrew Shenoy, who were married April 17 at the Basilica of St. Patrick’s Old Cathedral in Lower Manhattan, even that relatively small geographical gap was sometimes difficult to bear. From 2016 to 2019, the couple dated while separated by the Hudson River and three New Jersey counties.

“Some of my friends used to make fun of me when I called it a ‘distance relationship’ because I had friends who were dating people in California and stuff like that,” said Mr. Shenoy, 30, a partner at Heights Point Management, an equity fund based in New York. “But when you only see someone in person once every two, three weeks, it’s still distance.”

Dr. Jacob, 32, remembers that parting at the end of weekends together could be trying, even though she knew a reunion was never far-off. “There were a few times when I would be leaving on Sunday night where I would definitely just get a little teary and like cry.”

This was not the first time that the couple found themselves just out of arm’s reach. When they first met in 2014, Dr. Jacob was living with her parents in Roslyn Heights, N.Y., while she was on a clinical rotation at a hospital in Queens during her third year at Lake Erie College of Osteopathic Medicine.

But it was Dr. Jacob’s move to New Jersey, which she made for a pediatric residency at Rutgers Robert Wood Johnson Medical School, that was particularly challenging. “It was pretty tough and I felt pretty alone at that time,” Dr. Jacob said. “Those were the times I really wished that Andrew and I were in the same place.”

It wasn’t just that being apart took an emotional toll. It also made figuring out when to get engaged a little bit complicated. Mr. Shenoy, who graduated from the University of Pennsylvania with a bachelor’s in economics and another in applied science, said that within two years of dating he recognized that their relationship was “getting pretty serious” and that they wanted to spend as much time together as they could. Dr. Jacob felt the same way.

In 2016, she introduced Mr. Shenoy to her parents, a move she said is a major step in her Indian family: “That already makes it very serious.”

Despite their deep connection and commitment to each other, it was four years before the couple took the next step. Dr. Jacob moved to New York for a pediatric endocrinology fellowship at NewYork-Presbyterian/Weill Cornell Medical Center in 2019 and for a time they just enjoyed living together. “That was kind of the first step and the engagement made sense as the logical next step,” Mr. Shenoy said.

After a proposal in Prospect Park in Brooklyn in September 2020, Dr. Jacob and Mr. Shenoy decided to get married quickly. By that point they felt they had been delayed long enough. “We didn’t want to wait a full year to just have a party,” Dr. Jacob said. The April 17 ceremony was officiated by the Rev. Jilson George, a Syro-Malabar Catholic priest, in front of 13 other guests.

Dr. Jacob, who would have preferred a larger wedding under normal circumstances, said she knew they would have to limit their wedding to immediate family when they decided not to wait for the pandemic to be resolved. “It was either going to be less than 20 people or greater than 200,” she said. “There was like no in between.”

Denial of responsibility! TechiLive.in is an automatic aggregator around the global media. All the content are available free on Internet. We have just arranged it in one platform for educational purpose only. In each content, the hyperlink to the primary source is specified. All trademarks belong to their rightful owners, all materials to their authors. If you are the owner of the content and do not want us to publish your materials on our website, please contact us by email – [email protected]. The content will be deleted within 24 hours.
Loading...
Bridgedlifestyle newslifestyle updatenews updateNotSoLongDistanceProposalRelationshiptechi live
0
Share

Visit us and other agencies at the Virtual Health & Wellness Festival April 1-30, 2021

Mourinho looks for redemption at Roma after Tottenham failure