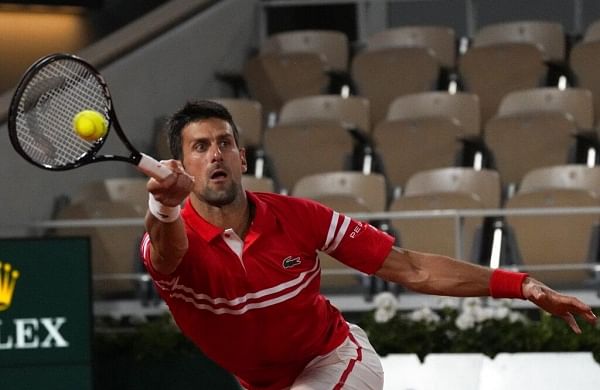 Once two points from a straight-set victory and seemingly well on his way to a French Open semifinal showdown against Rafael Nadal, Djokovic had to deal with so much that went awry: consecutive unforced errors that gave away a tiebreaker; a 21 1/2-minute delay while spectators left because of a COVID-19 curfew; a face-down tumble that drew blood from his left palm.

Still, the top-seeded Djokovic held on and moved on, pulling out the quarterfinal victory against No 9 Berrettini 6-3 6-2 6-7 (5) 7-5 on Wednesday night.

“This match had it all: falls, crowd, break. It was a lot of intensity. I just felt under tension the entire time,” Djokovic said.

“The reaction (at) the end was just me liberating that tension that was building up for the entire match.”

Now comes a semifinal on Friday against a familiar foe in a rematch of last year’s Roland Garros final, but a round earlier: Nadal, who is 105-2 in the clay-court tournament.

“We know each other well,” the third-seeded Nadal said.

“Everybody knows that in these kind of matches, anything can happen.”

His pursuit of a record-breaking 21st Grand Slam title, and what would be a 14th in Paris alone, remained very much intact, however.

Nadal shrugged off dropping a set at his favorite event for the first time in two years by whipping violent forehands punctuated with fist pumps and yells of “Vamos!” en route to a 6-3 4-6 6-4, 6-0 victory over 10th-seeded Diego Schwartzman.

“For anybody, it’s very difficult to play against him. He’s feeling very comfortable on court,” Schwartzman said after falling to 1-11 against Nadal.

Nadal reached his 14th semifinal in Paris; Djokovic his 11th.

It’s Djokovic’s 40th trip to the final four at any major, Nadal’s 35th.

Nadal and Roger Federer share the men’s mark of 20 Grand Slam titles; Djokovic is at 18.

The semifinal will be the superstar duo’s 58th matchup, more than any other two men in the sport’s professional era; Djokovic leads 29-28.

“I’m confident. I believe I can win,” Djokovic said.

“Otherwise, I wouldn’t be here.”

The other men’s semifinal on Friday is No 5 Stefanos Tsitsipas vs No 6 Alexander Zverev.

There are four first-time Grand Slam semifinalists left in the women’s bracket, something that last happened at a major during the 1978 Australian Open.

Djokovic was so close to advancing when he led the third-set tiebreaker against 2019 US Open semifinalist Berrettini 5-4.

But after accumulating merely 14 unforced errors over about 2 1/2 hours up to then, Djokovic committed two in a row, a nervy forehand into the net, then a backhand into the net, and lost that set, drawing roars from a crowd hoping for more tennis.

The number of people allowed in the 15,000-seat main stadium was limited to 1,000 for each of the first 10 days of the tournament because of pandemic-related restrictions, but that limit was raised to 5,000 on Wednesday.

The start of play for Djokovic-Berrettini was bumped up an hour to 8 pm, and the 9 pm curfew that had been in place was moved to 11 pm.

They did the wave, added some atmosphere and kept chair umpire James Keothavong a bit busy, especially when it was time to empty the stadium.

When the curfew arrived, there were jeers and whistles and some slow movers, so Djokovic and Berrettini, who seemed particularly buoyed by the prodding he received from fans, gathered their belongings and left the court until the match could resume.

Berrettini said that when action returned, his legs felt like they were “made of marble.”

“It’s a shame. It’s something that I don’t like,” he said about the delay, adding that he understood the need for special rules during the pandemic.

Berrettini didn’t play a point in the fourth round because the player he was supposed to face, Federer, withdrew with an eye to being ready for Wimbledon.

In Djokovic’s previous match, he dropped the first two sets against another Italian, 19-year-old Lorenzo Musetti.

Sure, Berrettini produced a trio of break points in the opening set on Wednesday, but converted none and never earned another such chance.

But Djokovic needed to do a little extra work to finish the job.

Nadal, meanwhile, entered his quarterfinal with a 35-set run at Roland Garros that began during the 2019 final.

That grew to 36, before Schwartzman outplayed him for a stretch.

“I don’t pretend to come here and not (lose) sets. Is not my mindset to come here and just thinking (losing) a set is going to be a disaster for me. I mean, that’s part of the game,” Nadal said.

“The thing that matters is how you recover from a set lost.”

At a set apiece and Schwartzman up 4-3 in the third, this is how Nadal sized things up: “That was the moment to make it happen.”

As if wanting something were enough to will it into existence, he won the next nine games, leaving Schwartzman muttering to himself and bouncing his racket off the clay.

Loading...
Denial of responsibility! TechiLive.in is an automatic aggregator around the global media. All the content are available free on Internet. We have just arranged it in one platform for educational purpose only. In each content, the hyperlink to the primary source is specified. All trademarks belong to their rightful owners, all materials to their authors. If you are the owner of the content and do not want us to publish your materials on our website, please contact us by email – [email protected]. The content will be deleted within 24 hours.
13timesChampiondjokovicFrenchFrench OpenMeetNadalnews update
0
Share

The C.D.C.’s New Leader Follows the Science. Is That Enough?