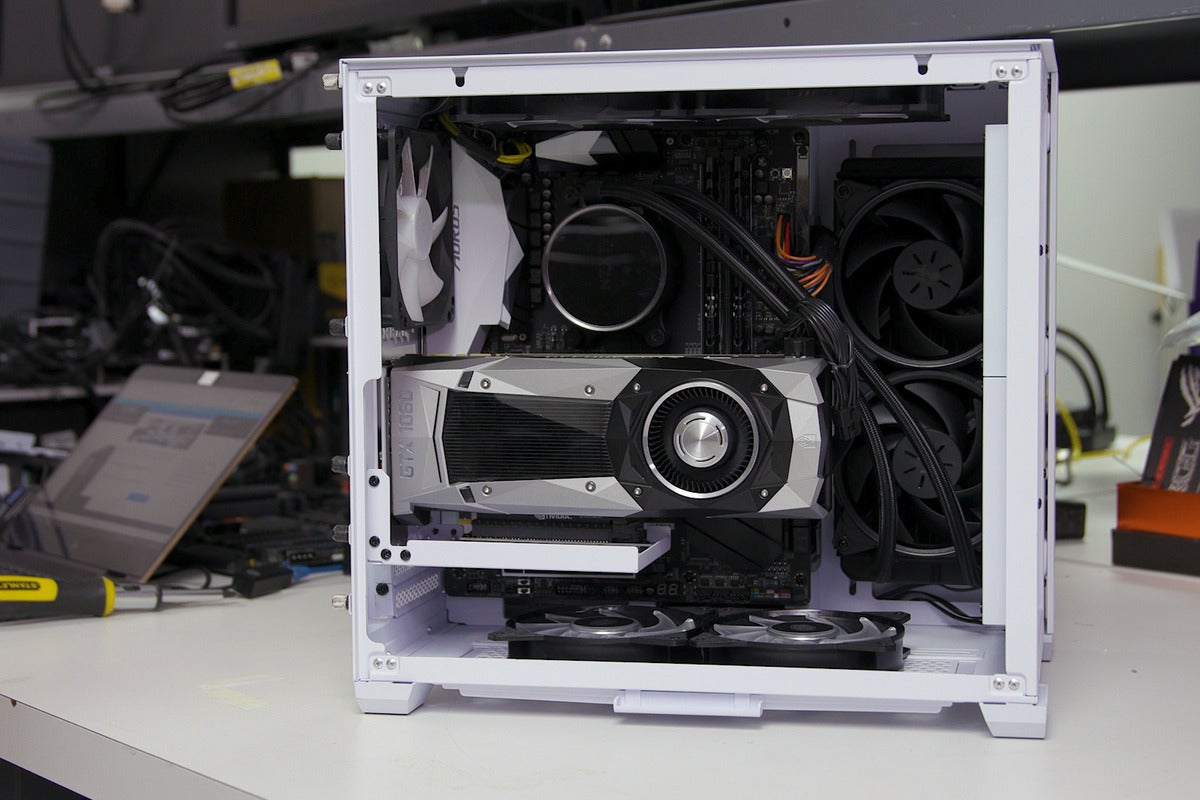 You’ve probably already seen a Lian Li O11 case before. Visit any forum where people show off builds, and the O11 Dynamic comes up time and time again. But the Dynamic isn’t the only O11 line that Lian Li produces. It also has the O11 Air, which focuses more on airflow.

The company is now launching a Mini version of the Air, one that sports some key differences from its O11D Mini cousin. And those features may be enough to lure away builders from the O11D Mini that launched late last year—after some hands-on time with the case, I think this may be the one I’d recommend of the two.

Looking for a direct comparison with the O11D Mini? Check out our side-by-side breakdown of each case’s specs.

Compared to the original O11 Air, the Air Mini has much more of the appearance (and feel) of the O11 Dynamic line. In fact, it resembles the O11D Mini enough that the two often have been compared in the lead up to the Air Mini’s launch.

But while the two look similar, the Air Mini comes with more mesh and cooling as the default default. It has just one tempered glass panel—all the other panels are metal with perforated (“mesh”) segments—and includes three PWM fans. (You get two 140mm at the front, and one 120mm at the rear.) And importantly, this new case is also shorter, fatter, and a bit larger.

But since the O11 Air Mini doesn’t run as deep as its O11D counterpart, it has only one location where you can install up to three 120mm fans—and it doesn’t support 360mm radiators at all. Instead, you get an additional mounting spot for fans (up to 140mm) and a radiator (up to 280mm) at the front, which also can be easily removed.

That fourth spot allows more flexibility for component positioning within the case, as the O11 Air adapts a useful feature from the O11 Dynamic line—modularity. This case can be configured in a “7-slot mode” to fit EATX or ATX motherboards or in a “5-slot mode” to give micro-ATX and mini-ITX motherboards more room at the top of the case. It’s even compatible with the O11D Mini’s vertical GPU mounting bracket accessory, as well as a new top-mounted radiator bracket accessory that enables installation of a 280mm rad in 7-slot mode.

Of course, with that flexibility comes a wealth of details to track for component clearances. But since the Air Mini has only two configuration “modes” compared to the Dynamic Mini’s three, it’s not quite as dizzying.

Like the O11D Mini, the O11 Air Mini has a straightforward easiness that minimizes frustration during most build projects. But because it has more mounting spots for fans and radiators, the O11 Air Mini would be my pick of the two O11 Minis for newer or pragmatic builders. For example, if you end up buying an AIO CPU cooler with shorter tubes than expected, you have more alternative locations for installation. No need to think deep on how to work around that unexpected issue.

Small touches on the Air Mini also push it ahead of the O11D Mini, like the finger grip along the back edge of the right-side panel. It makes sliding the panel from the case even simpler.

Only two small changes would make this case more ideal. First, Lian Li could have extended its depth to match the O11D Mini—which frankly isn’t that much deeper—to fit 360mm radiators. Or at the very least, the O11 Air Mini could be made deep enough to fit three 120mm fans at the bottom. I also would prefer to still have removable dust filters paired with the metal mesh panels, since they can be rinsed under a sink without worry about scuffs or rusting. The only removable dust filter on the O11 Air Mini is on the underside of the case.

The O11 Air comes in two colors, with the black version priced at $110 USD and the white variant coming in at $120. MSRP is $10 less outside the US. You can find this case along with the vertical mounting bracket ($50 with a PCIe 3.0 cable, $80 with a PCIe 4.0 cable) and the radiator bracket accessory ($9) on Newegg. Orders placed now will ship later in the month.

With a lower starting price than the O11D Mini and three included fans, the O11 Air Mini will offer greater value and a better balance between thermal performance and aesthetics for most PC builders. You still have a tempered glass panel to show off tidy cable management and RGB accessories (heck, the light’s still going to come through the front mesh panel anyway), but you’ll have to worry a lot less about whether or not your system is optimally configured to get enough air to your components. It’s hard to argue for the O11D Mini unless you’re set on an elaborate, gorgeous build.

Loading...
Denial of responsibility! TechiLive.in is an automatic aggregator around the global media. All the content are available free on Internet. We have just arranged it in one platform for educational purpose only. In each content, the hyperlink to the primary source is specified. All trademarks belong to their rightful owners, all materials to their authors. If you are the owner of the content and do not want us to publish your materials on our website, please contact us by email – [email protected]. The content will be deleted within 24 hours.
airairflowfocusedCasegadget updateHandsOnLianLismini
Share

‘Fragmentation frustration’: Too many HR tools can hamper productivity