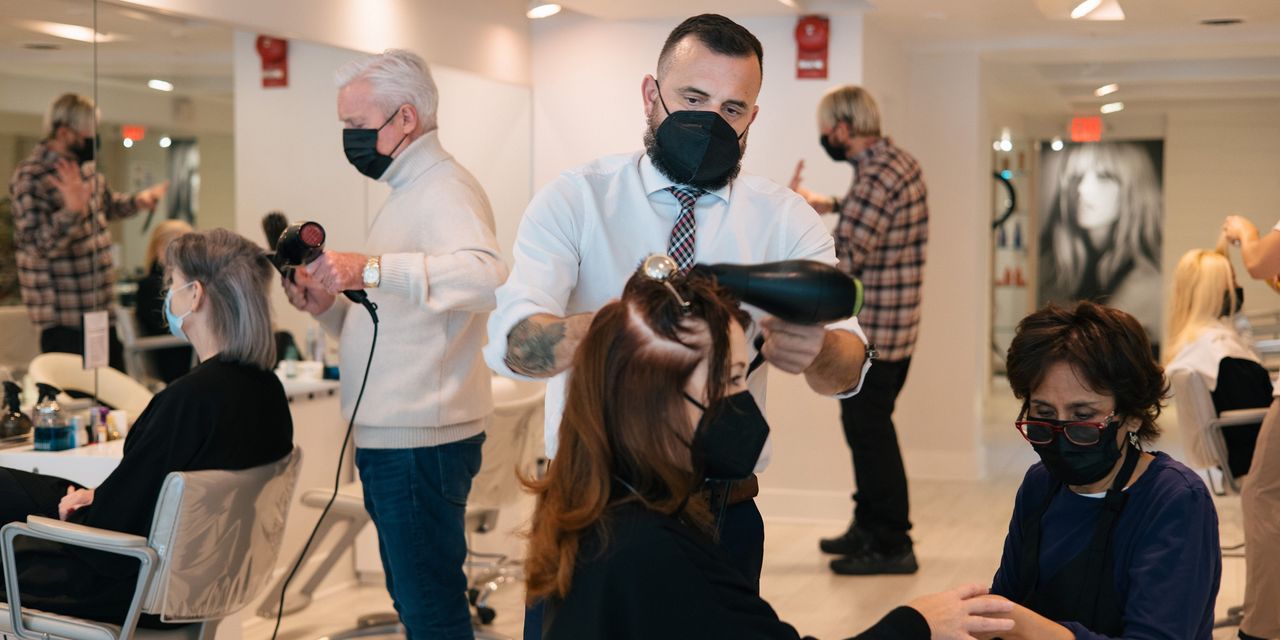 Omicron and the Week America Is Calling In Sick

Hundreds of first responders in Los Angeles are out sick or quarantined due to Covid-19. A hotel staffing company is flying housekeepers to Florida and Texas to fill in for absent staff. A medical laboratory in Denver doesn’t have enough staff to send people to nursing homes to take blood samples.

The first full week of 2022 was supposed to signal a return to work after the winter holidays. Instead, America called in sick. Employers have been hit by a global wave of Covid-19 illnesses and people missing work because they or their family or co-workers have been exposed to the fast-spreading Omicron variant. School closings and child-care issues are also keeping some workers at home.

“We have gotten to the point this week where there are a number of shifts that nobody can fill,” said Lena DeGloma, owner of Red Moon Wellness spa in the Brooklyn borough of New York City. Six of 25 employees were out Thursday, with two having just come back. Ms. DeGloma returned to work Thursday after quarantining for 10 days because she tested positive for Covid-19.

The recent surge in employee absences is the latest strain on public and private sectors already worn down by the pandemic, supply chain snarls, labor shortages and rising prices. Many employees are reporting mild symptoms as a result of Covid-19, employers say, but must still miss multiple days of work, leaving employers to grapple daily with the question of who will be in and who can’t make it.

An inability to get Covid-19 tests is also a challenge for some people figuring out whether they can work outside the home, travel and congregate with others.

The fresh disruption to the global labor market at the start of the third pandemic year is both familiar and foreign. In the U.S., the seven-day average of daily cases reported surpassed 500,000 for the first time since the 2020 pandemic declaration. Omicron infections are resulting in fewer hospitalizations than earlier variants but the volume of people testing positive or exposed is taking its toll on workplaces—which are already stretched by the tight U.S. labor market.

More than five million Americans could be stuck at home isolating over the coming days, according to

senior U.S. economist at Capital Economics. Though the economic effects of the latest Covid-19 surge could be temporary, he wrote in a report Wednesday it could “deal a significant hit to the economy over the next month or two.”

Los Angeles officials said Thursday they had adequate staffing for emergency services despite having more than 400 police officers and roughly 300 firefighters and emergency medical personnel who were sick or in quarantine.

“What is so difficult about this illness is you don’t know if you’ve got it until you take a test—and that takes time,” said Terry Bell, co-owner of Salon ILO in Washington, D.C.

Revenue fell by about 50% at Mr. Bell’s business during the pandemic, but no one got sick until mid-December, when the salon had to close for two weeks and cancel about 400 appointments. Fifteen of 18 staff members were diagnosed with Covid-19 following the annual holiday party. All 18 had been vaccinated, and only one hadn’t received a booster shot, said Mr. Bell, who tested negative.

The salon, in business for 41 years, reopened a few days before the New Year’s holiday. Then, this Tuesday, one hairdresser, who had been ill in December, called in to report a sore throat, forcing the salon to cancel another 45 or so appointments.

The hairdresser ended up testing negative, he said, and returned to work Thursday.

Greg Casten, a partner in four family-owned Washington restaurants, now begins his mornings with a health update from his management team. “Every day, there is at least one surprise,” said Mr. Casten, who estimates that, since mid-December, about 35% of his employees have called out because of Covid-19 or a Covid-19 exposure.

At one of Mr. Casten’s restaurants, Nick’s Riverside Grill, two of six employees are out. At Tony and Joe’s Seafood Place, managers waited tables and cleaned dishes this week because so many other staffers were ill or in quarantine.

Mr. Casten said he was relieved to close his restaurants on Monday in response to a winter snowstorm, a step he wouldn’t normally take. “I am strung out and tired,” he said. “We were very happy not to open because of the weather.”

At Rocky Mountain Labs, an independent clinical laboratory in Denver that began offering Covid-19 tests early in the pandemic, Omicron has brought a surge in demand for the tests at the same time that it has taken staff out of commission. Three of the lab’s nine employees were out sick with the virus this week, said co-owner Amy Hicks, and another just gave notice, citing burnout.

To fill all the requests for Covid-19 tests, Ms. Hicks and her husband, a physician and co-owner, have had to pull staff from their second location, a lab that does traditional pathology work. And they have had to reduce some services, such as sending phlebotomists to nursing homes to draw blood and bring the samples back for testing. “We’re so short-staffed we have to tell clients we can’t come out,” she said.

Dan Kesic, president of Chicago-based Hospitality Services Group, contracts with clients including hotels and resorts to provide housekeepers, servers and cooks. Mr. Kesic said at least 30% of the company’s more than 1,000 hourly workers are dealing with Covid-19 this week, either from infection or exposure.

“This week, it’s just like there’s no fix,” he said. ”As you fix something, something else breaks. There’s these expectations from people that you can’t meet.”

To fill the gap, Mr. Kesic said his company is subcontracting work in markets where clients are located, including Florida, Texas and Arizona, as well as paying bonuses to people who can even work up to two weeks on some jobs.

He said the company in recent weeks also paid to fly staff across the country, similar to traveling nurses, to fill hotel housekeeping or other roles. But Covid-19 is also upending those plans, with the recent spate of flight cancellations.

The Omicron variant has battered many businesses that until recently had been able to keep Covid-19 at bay through masking, vaccinations and other safeguards.

Red Moon Wellness, the Brooklyn spa, requires employees exposed to the virus to remain out for at least 10 days and be symptom-free and have two negative tests before returning.

Ms. DeGloma spends hours each day rescheduling staff shifts, tracking who might have been exposed to the virus and helping workers apply for paid family leave. “I feel like I have to take on the role of contract tracer, just to be sure everyone stays safe,” Ms. DeGloma said.

Jordan Krawll, the owner of six hair salons in Miami, was on the cusp of closing one location this week after two staffers became ill and a third said her daughter wouldn’t let her work due to health concerns. The three remaining employees volunteered to each work an extra 10 hours a week, allowing the location to remain open with reduced hours.

Employees “have a tremendous amount of pride. They didn’t want to see the store close,” Mr. Krawll said. “We have had more cases in the past two weeks than in the past two years,” he added.

For some businesses, a temporary shutdown has been the only option. At Cooper’s Corner Montessori International in New Rochelle, N.Y., the callouts started on Dec. 28, when one employee texted director Tina De Silva to let her know she had tested positive for Covid-19 and wouldn’t be back on Monday, when the center’s four locations were slated to reopen after the holiday break.

Ms. De Silva then texted a worker who typically covers absences and learned she had tested positive as well. Over the next four days, more calls came in and, by the weekend, Ms. De Silva concluded she needed to temporarily shut down two locations.

The shutdowns particularly stung, she said, because Cooper’s Corner managed to remain fully open throughout the entire pandemic, with the exception of the outbreak’s early days when health officials ordered schools and child-care centers to shut down.

Denial of responsibility! TechiLive.in is an automatic aggregator around the global media. All the content are available free on Internet. We have just arranged it in one platform for educational purpose only. In each content, the hyperlink to the primary source is specified. All trademarks belong to their rightful owners, all materials to their authors. If you are the owner of the content and do not want us to publish your materials on our website, please contact us by email – [email protected]. The content will be deleted within 24 hours.
AmericaartsBARSbusiness newsBusiness updatecallingepidemicsgeneral news
Share