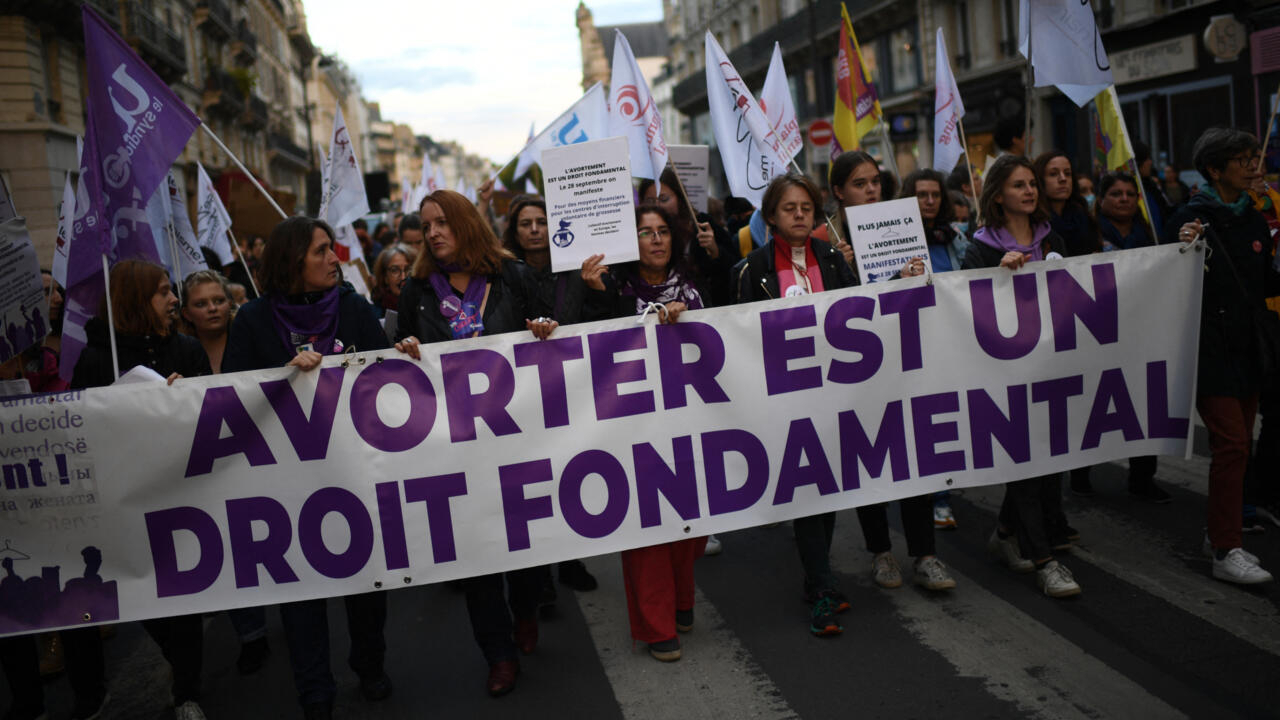 The French lower house National Assembly will vote November 24 and 28 on enshrining abortion rights in the country’s constitution. Two rival proposals, one drafted by hard-left France Unbowed party and the other by Macron’s Renaissance, will be debated by MPs. But even if one passes, the road ahead is rife with political divisions and complex procedures.

Simone Veil helped pass a law decriminalising abortion in France when she was serving as health minister. The Veil Law, or “the Voluntary Interruption of Pregnancy Act”, was adopted on January 17, 1975.

But shortly after the US Supreme Court overturned the landmark Roe v. Wade ruling, the French National Assembly was buzzing with debates on whether or not the country should enshrine that same right into its own constitution.

Two separate amendments, one by France’s hard-left Unbowed party and the other by President Macron’s Renaissance party, were filed as a result. Bound together by the will to protect the right to abortion in the French Constitution, they will be debated by MPs on November 24 and 28, respectively.

“No woman can be deprived of the right” to an abortion, reads the proposal by Macron’s Renaissance party. France Unbowed’s is similar but includes the right to contraception, reading: “No one can infringe the right to abortion and contraception.”

Some MPs from right-wing and far-right parties see the bills as knee-jerk reactions to a legal right that is, according to them, not under threat in France.

Others, like France Unbowed MP Adrien Quatennens, consider the overturning of Roe v. Wade as a red flag and prefer to take preventative measures. “In light of the situation in the United States … this right must be protected in the constitution because the future is uncertain as to whether it could be threatened,” he told French newspaper Le Monde.

The presidential party and the New Ecological and Social Popular Union (NUPES), which includes France Unbowed, have seemed to reach a consensus. But MPs from parties on the right like the Republicans (LR) or far-right National Rally (RN) are torn between conservative and even anti-abortion stances, and more progressive ones.

Republicans party MP Aurélien Pradié, for example, recently voiced his support for the bill. “I hope we can vote to constitutionalise this right,” he said on French channel Sud Radio. But the man at the head of Pradié’s party, Bruno Retailleau, tweeted his reluctance on including the right to abortion in the constitution.

Marine Le Pen, who has spearheaded the far-right National Rally party until recently, has always expressed her reluctance. “We are not the United States. No political party in France is calling for abortion rights to be abolished. I don’t really understand what danger this bill is trying to address,” she told French newspaper Journal du Dimanche on November 13.

During her 2012 campaign for the French presidency, she didn’t express appreciation for abortions being reimbursed by the state and believed some women use them as a means of contraception, when speaking of “comfort abortions”. Her words were and still are highly controversial.

Other members of the National Rally are staunchly and vocally opposed to the idea. Some even went as far as to compare abortions carried out at 14 weeks (now legal in France) to “the Armenian and Rwandan genocides, to the Holocaust.”

Since France’s current constitution was adopted in 1958 only 24 revisions have been made, the last one having passed in 2008. These include the right to direct universal suffrage, passed in 1962, and limiting presidential powers to two consecutive terms.

In order for the constitution to be amended, there must be presidential approval, approval of both houses (National Assembly and the Senate) and approval of the final text by a three-fifths majority of two parliaments. Another option is to hold a referendum, but only after the two assemblies have voted in favour of the bill.

This means that even if one of the texts were to be adopted by the National Assembly, there would still be a long way to go before the right to abortion is enshrined in the constitution.

And so far, motions to do so have been rejected by the French Senate.

Speaking to FRANCE 24, green senator Mélanie Vogel explained that since the Loi Veil – the 1975 law decriminalising abortion in France – was passed, “the right-wing senators have always opposed various advances concerning abortion rights.” Citing examples, she continued: “[The right] opposed reimbursing abortion costs, the extension of legal time limits and the criminalization of interference.” But she remains optimistic.

On October 19, right-wing senators rejected Vogel’s cross-party proposal to enshrine abortion in the constitution. “The opposition was not so strong in the end,” she said, referring to the 139 for and 172 against. “I believe that there’s a way forward, and that we have a chance to win this victory in the Senate.”

This article has been translated from the original in French.

Denial of responsibility! TechiLive.in is an automatic aggregator around the global media. All the content are available free on Internet. We have just arranged it in one platform for educational purpose only. In each content, the hyperlink to the primary source is specified. All trademarks belong to their rightful owners, all materials to their authors. If you are the owner of the content and do not want us to publish your materials on our website, please contact us by email – [email protected]. The content will be deleted within 24 hours.
abortionconstitutionenshriningEuropeFranceFrenchHealth newsHealth update
Share