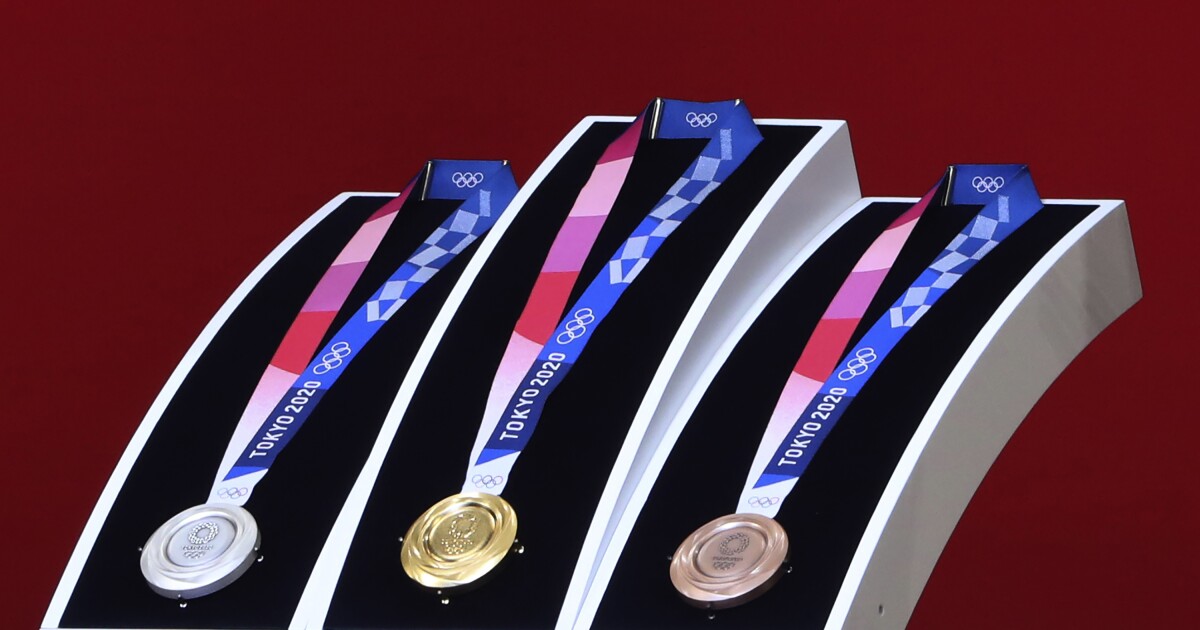 One thing won’t change in these Olympics: A big U.S. medal haul

Reminders that these Summer Games aren’t normal come in the form of the plastic dividers that separate each athlete at tables in the Olympic village dining hall. The narrow vials that participants, officials, media and other credential holders must regularly fill with saliva to test for the coronavirus. The ever-present temperature checks. The stands that won’t have spectators in the vast majority of 42 competition venues.

Though the still-surging COVID-19 pandemic has transformed the 17-day event into as much of a public health challenge as an athletic extravaganza, one thing should remain the same amid the unpredictability as the Games open Friday.

The U.S. is projected to win more medals than any other country for the seventh consecutive Olympics.

The team includes household names such as Simone Biles, Allyson Felix, Katie Ledecky and Megan Rapinoe in addition to a slew of athletes such as Caeleb Dressel, Sydney McLaughlin and Nyjah Huston who are primed to join them as faces of the most unusual Games in modern history.

Gracenote, a sports analysis and data company that estimates medal counts, noted this week that there is the “potential for the Tokyo Summer Games to be more unpredictable than normal.” The company uses a formula based on recent competitions, so the pandemic has thrown many of its calculations into chaos because of halted competitions, irregular training routines, limited travel and sick athletes.

The company predicts the U.S. will win 96 medals, including 40 golds. That’s down from the 121 it had at the Rio de Janeiro Games in 2016. The medals would come in 27 of the 33 sports. Russia, China, Japan and Britain round out the top five, though none is expected to approach the U.S. total.

“Normally a data-driven forecast of the Summer Olympics provides a good assessment of how the medal table will look,” Simon Gleave, Gracenote’s head of sports analysis, said in an email. “There will always be countries and athletes who over- and underperform in comparison to their results prior to the Games though, and this is why sport is so compelling. We can never truly know what will happen.”

That might never be more true than in this edition of the Games. A handful of U.S. athletes — including basketball player Bradley Beal, tennis star Coco Gauff and 3-on-3 basketball player Katie Lou Samuelson — already tested positive for the virus and didn’t travel to the Games. Kara Eaker, an alternate gymnast for the U.S., tested positive during training in Japan and is isolated.

Some countries have tempered expectations for their performances because of the rampant uncertainty, both in the months of preparation and the looming possibility that a positive test could end an athlete’s medal hopes. Britain settled for a wide range of medal goals instead of a specific target, while Australia dropped the number altogether after Rio. During a news conference last month, Japanese Olympic Committee President Yasuhiro Yamashita appeared to back off the group’s goal of winning 30 golds.

“The preconditions have changed dramatically for the Japanese athletes,” Yamashita said. “This was not an event where adequate proportions were possible.”

Mitsugi Ogata, another official with Japan’s committee, said this week that the 30-medal goal “may not have the same relevance of significance” as before the pandemic.

But lofty expectations remain for the U.S. team, which includes more than 50 gold medalists. Michael Phelps — the most decorated Olympian of all time, who retired after winning five golds in Rio — may be an NBC commentator now instead of a medal favorite. However, the U.S. still has plenty of attention-grabbing talent.

The gravity-defying gymnastics from Biles are one of the primary attractions, making her a strong favorite to collect golds in the all-around, floor exercise and vault in addition to the team competition.

Ledecky is another headliner. The swimmer holds world records in the 400-, 800- and 1,500-meter freestyles, also will swim the 200 freestyle, and somehow makes the long-distance races look routine.

“I know this is going to kind of be a made-for-TV Olympics, and I hope that everyone around the world tunes in and enjoys it and recognizes the beauty of the work these athletes have put in over the last five years,” Ledecky said this month during training camp in Hawaii. “I know we’re not going to take it for granted or gloss over the magnitude of this type of event.”

Felix will compete in her fifth Olympics — she will run the 400 meters — while Rapinoe is one of the stars on the powerful women’s soccer team.

The men’s foil team, ranked No. 1 in the world four of the last five years, could win the country’s first team gold in fencing.

They’re joined by a deep group of up-and-coming athletes. Dressel, whose sleeve of tattoos on his left arm undoubtedly will be a frequent visual during the swimming competition, will contend for up to seven medals. That’s Phelps-ian territory, as Dressel is a favorite to win his three individual races — the 50 freestyle, 100 freestyle and 100 butterfly — and could join four relays. McLaughlin, just 21, holds the world record in the 400 hurdles. Sprinter Noah Lyles has the world’s top time in the 200 this year. Huston, already a transcendent figure in skateboarding, will help the sport make its Olympic debut.

“It’s a lot bigger than any other contest. It adds a lot of pressure,” Huston said. “With the Olympics, you have to bring out all the best tricks to win. I’ve got some things in mind. I’ve been working on some new ones. I’ve been working on two new tricks over the past year, and I’ve had to relearn some old ones.”

Sha’Carri Richardson might have outshined most of the 600-plus members of the U.S. team. The 21-year-old won the 100 at the track and field trials last month with orange-dyed hair and appeared to be the country’s best chance to win gold in the event since Gail Devers captured the race at the Atlanta Games in 1996. But Richardson was suspended a month after testing positive for THC, the main ingredient of marijuana, and won’t compete at the Games, a punishment that ignited worldwide furor.

Regardless of that setback or the risk of predictions for the U.S. team in the midst of a pandemic, plenty of American athletes will bring home the medals made from material extracted out of recycled electronics like cellphones and digital cameras.

“The women, if we have the meet we can have, can win every single individual gold,” Lilly King, the defending gold medalist in the 100 breaststroke, said of the women’s swimming team. “I think that would be pretty cool, right? But really, just looking at it, I think that is a genuine possibility.”

The swagger from years of gold-plated success hasn’t faded. The only question is how many medals.

Denial of responsibility! TechiLive.in is an automatic aggregator around the global media. All the content are available free on Internet. We have just arranged it in one platform for educational purpose only. In each content, the hyperlink to the primary source is specified. All trademarks belong to their rightful owners, all materials to their authors. If you are the owner of the content and do not want us to publish your materials on our website, please contact us by email – [email protected]. The content will be deleted within 24 hours.
bigchangehaulmedalnews updateOlympicssports newssports update
0
Share