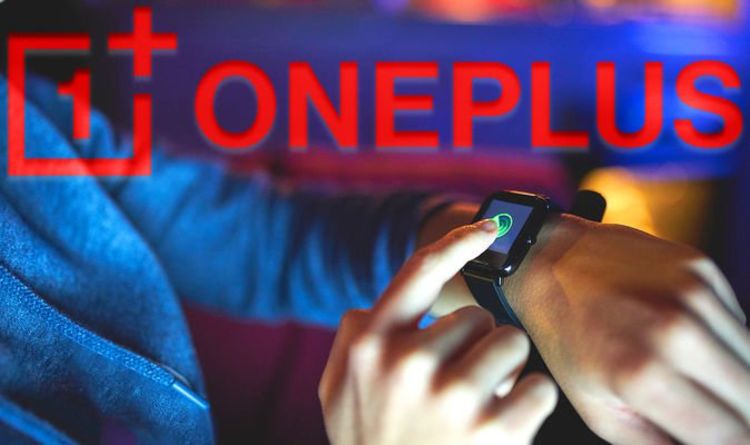 OnePlus will hold its latest hardware showcase this afternoon, where the Shenzhen-based company is widely-tipped to unveil the successors to the OnePlus 8 and 8 Pro. Not only that, but the event will also see the firm’s first foray into wearables with the announcement of the OnePlus Watch. If you’re on tenterhooks and want to see OnePlus’ first smartwatch unveiled on-stage, then you might want to stop reading right now… as below is the first look at the new gadget.

Yes, ahead of the announcement during OnePlus’ presentation, the design of the OnePlus Watch has been confirmed. YouTube superstar Unbox Therapy revealed the exclusive first look at the OnePlus Watch, which has a design much more reminiscent of the Samsung Galaxy Watch or Moto 360, than the market-leading Apple Watch.

That’s because the OnePlus Watch has a circular touchscreen display. Two buttons are visible on one side of the casing. OnePlus has fitted the smartwatch with a sporty rubber band with a similar clasp to that found on the Apple Watch and the Fitbit Sense. Interestingly, it looks like OnePlus will rely on a standard watch system to connect the straps to the watch, so it might be possible to use any existing leather or fabric straps you’ve got some an existing timepiece with this techie alternative.

The OnePlus Watch model on display in the tweet from Unbox Therapy has a black finish, however, we’d wager that other colourways will be included in the line-up when it’s announced later today. In a company blog post, OnePlus CEO Pete Lan confirmed the existence of the Chinese company’s first smartwatch and revealed that it won’t rely on Google’s WearOS.

MORE LIKE THIS
Your iPad could be outdated in days, here’s why OnePlus won’t be happy

In the first image of the OnePlus Watch, the display shows a pretty standard digital clock face with the date displayed beneath. There appear to be progress bars around the time that are filled up to different levels – perhaps to indicate how close you are to hitting a step goal or certain level of exercise for that day? Apple and Google both use circles to offer a quick visual clue to your progress throughout the day, it’s likely this is OnePlus’ alternative.

With OnePlus relying on its own operating system for the smartwatch, we’d expect to see some close tie-ins with OnePlus’ smartphones and other gadgets. For example, some tipsters have hinted that OnePlus Watch owners will be able to quickly change channels and adjust the volume on their OnePlus TV using the techie timepiece.

It’s still unclear exactly what smart and fitness features will be baked into this wearable. While it’s probably a safe bet that step count and heart-rate sensors will feature, support for some other options, like swim tracking or blood-oxygen levels, are much tougher to guess. One thing we’re pretty sure of – charging will be a big selling point for the OnePlus Watch.

Fast-charging has become one of OnePlus’ main selling points over rivals – when it comes to wired and wireless charging, it offers eye-watering speeds that make the competition wince. Even its earbuds have benefitted from its proprietary “Warp Charge” system, so it would be odd if the OnePlus Watch needs to be plugged into the wall for hours to top-up its battery.

As you’d expect, Express.co.uk will be glued to the OnePlus event tonight and will bring you all of the latest news as it breaks. So, stay tuned.