The Oppo F19 is the most basic version of the F19 series of smartphones; the entry point to F19 ownership. At its starting price of Rs 18,990, the Oppo F19 places itself in the supremely competitive sub-Rs 20,000 price segment. Phones from several prominent players in this price range all have a standout feature of their own to distinguish themselves from their rivals. Let’s see if the F19 has the chops to take the fight to stiff competition from Xiaomi, Realme and Samsung.

The Oppo F19 comes in three colours – Space Silver, Midnight Blue, Prism Black. We tested the blue version, which looked really good, but the rear glass panel – that sports a light-refracting finish – is a fingerprint magnet. This phone feels great to hold – it’s lighter than most phones its size and is notably thin and sleek as well. Doesn’t feel like a budget phone at all.

The plastic cover provided in the box and the pre-mounted screen guard do a good job of protecting the phone. I don’t particularly like the cover, because the plastic covering the charging port is rather annoying to deal with when you want to charge the phone.

The F19 supports dual 4G SIMs and also can accommodate a MicroSD card for those seeking expanded storage. At the bottom of the device, Oppo has added a USB C-type charging port and a 3.5 mm headphone jack. It has also included a pair of good earphones in the box.

The display on the Oppo F19 is a comfortable 6.43-inch unit with a resolution of 2400 x 1800 pixels. The screen is AMOLED, and as expected, the colours, brightness levels and contrast ratio are excellent. The panel has a standard 60 Hz refresh rate, but it’s worth noting there are similarly-priced phones that offer a 120 Hz refresh rate. The panel does, however, offer a 180 Hz touch sampling rate when you are gaming. The smoothness is missed here.

There doesn’t seem to be any scratch protection for the screen, either. So, you might want to keep that screen guard firmly on the display.

The F19’s screen-to-body ratio is an impressive 90.8 percent. However, the bezels are not uniform – the chin of the phone is thicker than its other edges. The display also has a punch-hole for the front camera. I think Oppo could have just gone with a uniform bezel and incorporated the camera into it.

The Oppo F19 runs ColorOS, which is based on Android 11. It has a rather simplistic look by default, which I like. There is a Theme store available on the phone, where you can buy or install free themes to change the look of the UI. I tried a couple of themes, but the default one looked the best.

The Oppo F19 runs ColorOS, which is based on Android 11.

The F19 does come with plenty of bloatware, and while you can delete some of it, most apps including Hot Apps, Tips, ORoaming and HeyTap Cloud are there to stay. The phone also supports FM radio, which is a fun thing to have, but no infrared blaster like on the Redmi Note 10 Pro Max.

In terms of performance, the F19’s Snapdragon 662 SoC is pretty good. All apps ran well and without any problems. The 6 GB of RAM and 128 GB of storage were adequate for all operations.

Gaming on the F19 wasn’t a great experience. Most games ran on default settings, but any attempt to crank up the visuals resulted in perceptibly slower performance, especially with heavier games such as Genshin Impact and Asphalt 9. Free Fire, on the other hand, ran beautifully, except for the emergence of an annoying black bar on the left of the screen, which I am assuming is a software issue. This is not a phone I would recommend to hardcore gamers, as despite having a dedicated gaming mode, its performance is not satisfactory.

In terms of performance, the F19’s Snapdragon 662 SoC is pretty good.

I do like some of the gesture controls included with this OS, like the three-finger downward motion, which triggers a screenshot. There are other gestures to control music, turn on the camera, and you can even configure new gestures as per your liking in the settings. These can be used even when the screen is off, though they don’t always register on the first attempt.

The Oppo F19 has a triple-camera setup: the main 48 MP camera is combined with a 2 MP depth sensor and a 2 MP macro shooter. At the front, it has a 16 MP selfie camera located in a corner punch-hole on the screen.

The rear camera setup comes together to capture good pictures and videos in daylight. Colour reproduction was good in images taken using the rear camera, but turning on the AI feature increased the saturation, resulting in the pictures looking plain wrong. It should also be noted there is no ultrawide photo mode or setting with this camera. Macro mode shot good pictures, and using the flash in fill mode resulted in some interesting macro images. 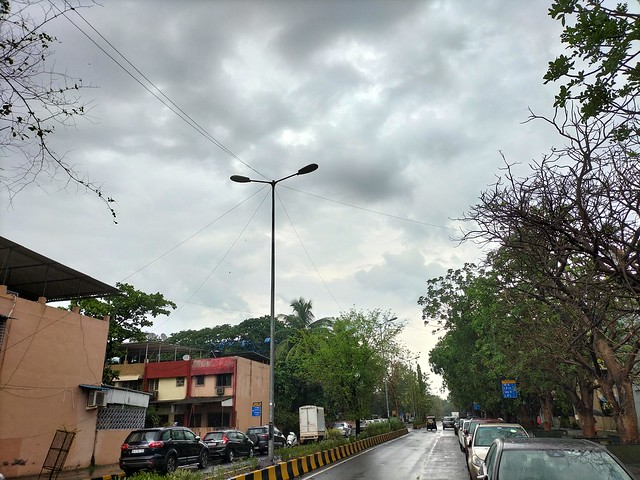 In low light, the phone took better pictures without the night mode on. Night mode, in most cases, led to a lot more noise in the images, which also notably lost sharpness and contrast.

Selfies taken with this camera turned out to be pretty good. The portrait mode was useful in daylight and let me add some nice bokeh effects. However, in low light, the front camera produced a lot of noise if the screen was not used to illuminate the face. Fortunately, there is a Pro mode included, which lets you tweak the pictures as per your liking.

Videos shot on this phone in daylight are impressive, but when shooting at night, I noticed a little bit of stuttering, which showed up in the recorded footage as well. The phone can only shoot video in two modes – 1080p at 30 fps and 720p at 30 fps. There is a slow-motion mode included, but you cannot adjust its settings.

There are two unique modes in this phone – Text Scanner and Sticker. The first is a special mode that lets you take pictures of text. Honestly, there is nothing special about it. Yes, you can take a picture of text and enhance it, but there is no Optical Character Recognition (OCR) function. So, calling it a text scanner is a bit misleading. Sticker mode lets you take pictures with Snapchat-style stickers, and in some cases, lets you add an avatar. However, it is buggy, and the phone can’t keep up because it stutters when you turn on an avatar.

I would have been happy with this camera if the Oppo F19 was a much cheaper phone. On a phone that costs nearly Rs 20,000, it is disappointing.

Going by the weight and width of this phone, there is no way anyone can guess it is hiding a 5,000 mAh battery. The F19 easily lasts an entire day and more of moderate use. With heavy gaming, you can get around six hours of use out of it. The great thing about the F19 is that it comes with a 33 W fast charger bundled, which means you can fully charge its massive battery in a little over an hour.

In regular use, the phone managed to stay cool for the most part. Under heavy workloads, the phone’s temperature spiked significantly, but it never grew hot enough to scorch my hands. Most of the heat generated is concentrated towards the camera side of the phone.

Some people can’t handle bulky phones and need something that is lightweight and budget-friendly at the same time. This Oppo F19 fills that void well. As for other aspects, it falls short when compared to its competition. As it stands, there are simply better options available at this price point. I would say buy the Oppo F19 if you can get a decent deal on it, and you value the lightness of this phone over its lack of features.

Denial of responsibility! TechiLive.in is an automatic aggregator around the global media. All the content are available free on Internet. We have just arranged it in one platform for educational purpose only. In each content, the hyperlink to the primary source is specified. All trademarks belong to their rightful owners, all materials to their authors. If you are the owner of the content and do not want us to publish your materials on our website, please contact us by email – [email protected]. The content will be deleted within 24 hours.
cedesCompetitionentrylevelF19Firstpostgadget updateGroundoppo
Share

What are you willing to wear on your next Zoom? Fetish fashion is on the rise

I Love My Old iPhone. Now I Might Finally Get to Keep It