Notice: amp_is_available was called incorrectly. `amp_is_available()` (or `amp_is_request()`, formerly `is_amp_endpoint()`) was called too early and so it will not work properly. WordPress is currently doing the `pre_get_posts` hook. Calling this function before the `wp` action means it will not have access to `WP_Query` and the queried object to determine if it is an AMP response, thus neither the `amp_skip_post()` filter nor the AMP enabled toggle will be considered. It appears the theme with slug `publisher` is responsible; please contact the author. Please see Debugging in WordPress for more information. (This message was added in version 2.0.0.) in /home/runcloud/webapps/techilive/wp-includes/functions.php on line 5313
 Opposition decries ‘hostage’ video as Belarus airs interview with detained journalist - TechiLive.in 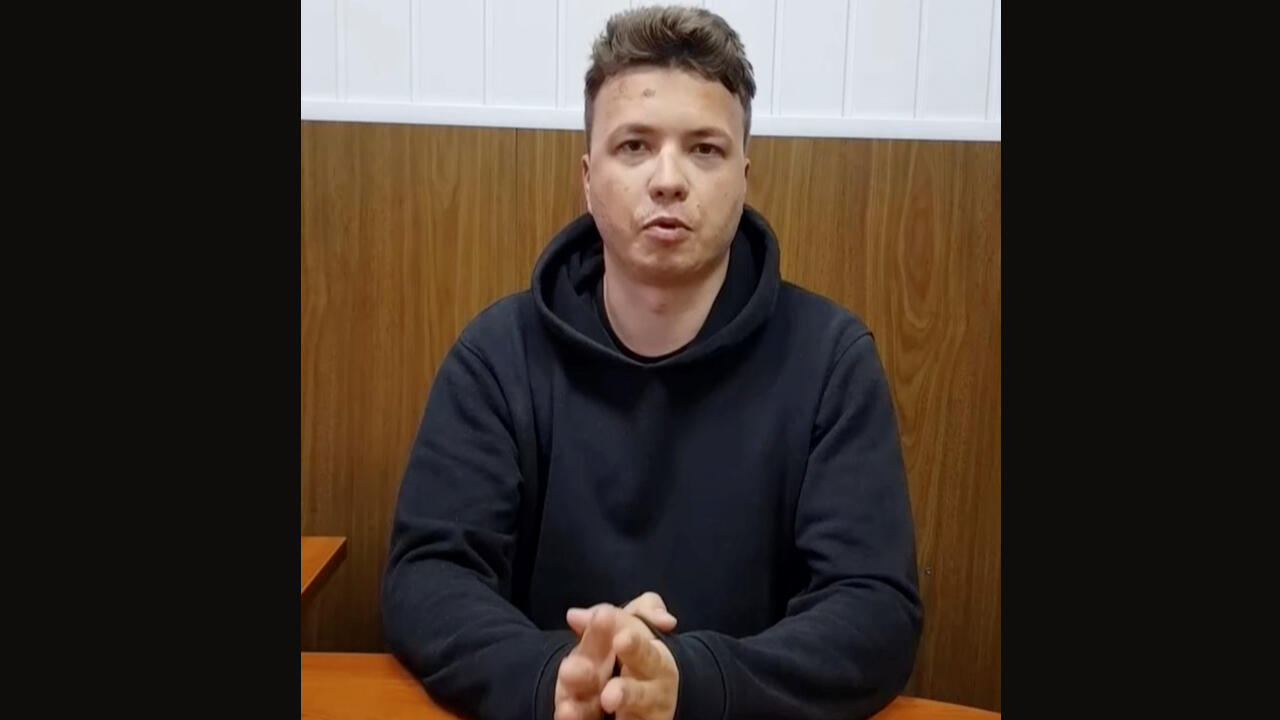 Belarusian journalist Roman Protasevich, who was arrested after his plane was forced to land in Minsk, appeared on state television Thursday in a tearful interview that family and campaigners say was conducted under duress.

At the end of the 1.5-hour interview broadcast by Belarus state-run channel ONT Thursday evening, Protasevich began crying and covered his face with his hands.

The 26-year-old’s father, Dmitry Protasevich, said that the video was the result of “abuse, torture and threats.”

“I know my son very well and I believe that he would never say such things,” he told AFP.

“They broke him and forced him to say what was needed,” he said, adding it pained him to watch the interview.

“I am very worried.”

Belarusian authorities accuse Protasevich of organising mass riots, a charge that could land him in prison for 15 years.

Franak Viacorka, an adviser to Belarus opposition leader Svetlana Tikhanovskaya, said it was “painful to see ‘confessions’” of Protasevich and called him a “hostage of the regime”.

Ahead of the broadcast, independent rights group Viasna said that Protasevich must have been coerced into speaking by Belarusian security services because he is facing “unfair, but very serious accusations”.

“Whatever he is saying now is pure propaganda, under which there is no truthful basis.”

Protasevich and his Russian girlfriend Sofia Sapega, 23, were arrested in Minsk on May 23 after Belarus scrambled a military jet to divert the Athens-Vilnius Ryanair plane they were travelling on.

They were accused of helping to coordinate historic demonstrations that broke out following Lukashenko’s disputed re-election last August.

Immediately after their arrest both Protasevich and Sapega appeared in “confession” videos that their supporters said were also recorded under duress and are a common tactic of the regime to pressure critics.

Protasevich’s parents said at the time their son looked like he had been beaten in the video.

In response to the arrests the European Union banned Belarusian state carrier Belavia from operating flights to airports in the bloc and discouraged EU-based airlines from flying over the ex-Soviet country.

In response to the protests, Belarus authorities waged a brutal crackdown on the opposition and civil society, detaining and imprisoning thousands of demonstrators and pushing opposition leaders into exile. Several people died in the unrest.

Denial of responsibility! TechiLive.in is an automatic aggregator around the global media. All the content are available free on Internet. We have just arranged it in one platform for educational purpose only. In each content, the hyperlink to the primary source is specified. All trademarks belong to their rightful owners, all materials to their authors. If you are the owner of the content and do not want us to publish your materials on our website, please contact us by email – admin@techilive.in. The content will be deleted within 24 hours.
airsAlexander LukashenkoBelarusdecriesdetainedEuropefreedom of the pressHealth news
0
Share

Pooja Bedi says she is friendly with ex-husband Farhan, who married her childhood friend: ‘We hang out’