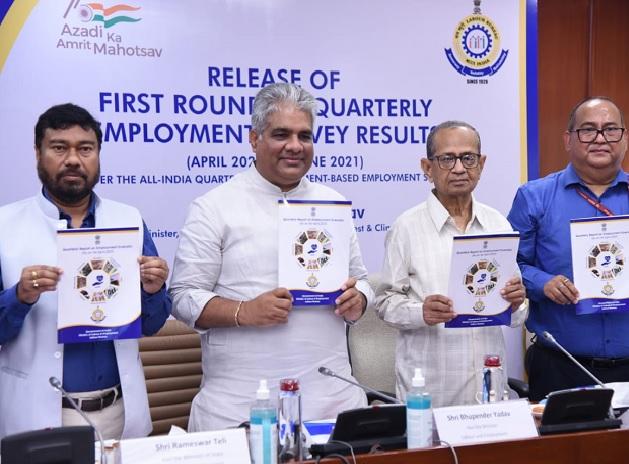 
The new revamped quarterly employment survey (QES) for organised sector showed that employment rose by a little over four per cent a year on an average in nine sectors during seven years till the first quarter of the current financial year.


The estimated total employment in the nine sectors–manufacturing, construction, trade, transport, education, health, accomodation and restaurant, IT/BPO and financial services–stood at 30.8 million during April-June, 2021 against a total of 23.7 in these areas reported in the sixth economic census. The census covered the period of January, 2013 to April, 2014.

This implies a growth rate of 29 per cent over a period of around seven years.


Meanwhile, the survey also showed that the Covid-induced employment decline was evident in 27 per cent of the establishments during the first wave that hit the country from March, 25 to June 30, 2020. The silver lining is that 81 per cent of the workers received full wages during the lock-down period.


However, a total of 16 per cent received reduced wages and around three per cent was denied any wages.


In the construction sector, 27 per cent had to accept reduced wages and seven per cent were left with none. In the health and financial services, more than 90 per cent workers received full wages.


The new QES was launched on Monday by labour minister Bhupender Yadav after the earlier QES was suspended three years ago in 2018. The new QES has one more added sector in it–financial services–compared to the previous one.


Key highlights of the first round of Quarterly Employment Survey:


• The over-all participation of female workers stood at 29 per cent, slightly lower than 31 per cent reported during sixth Economic Census (2013-14).


• Around 18 per cent of the establishments have provision of on-job skill training programmes.

Business Standard has always strived hard to provide up-to-date information and commentary on developments that are of interest to you and have wider political and economic implications for the country and the world. Your encouragement and constant feedback on how to improve our offering have only made our resolve and commitment to these ideals stronger. Even during these difficult times arising out of Covid-19, we continue to remain committed to keeping you informed and updated with credible news, authoritative views and incisive commentary on topical issues of relevance.

We, however, have a request.

As we battle the economic impact of the pandemic, we need your support even more, so that we can continue to offer you more quality content. Our subscription model has seen an encouraging response from many of you, who have subscribed to our online content. More subscription to our online content can only help us achieve the goals of offering you even better and more relevant content. We believe in free, fair and credible journalism. Your support through more subscriptions can help us practise the journalism to which we are committed.

Denial of responsibility! TechiLive.in is an automatic aggregator around the global media. All the content are available free on Internet. We have just arranged it in one platform for educational purpose only. In each content, the hyperlink to the primary source is specified. All trademarks belong to their rightful owners, all materials to their authors. If you are the owner of the content and do not want us to publish your materials on our website, please contact us by email – [email protected]. The content will be deleted within 24 hours.
accomodation and restaurantConstructioneducationEducation newsEducation updateemploymentHealthIT/BPO
Share