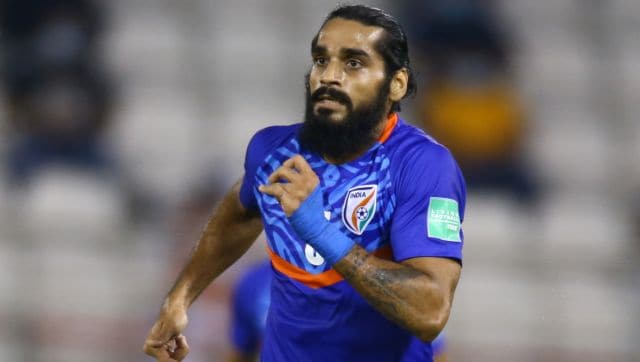 Sandesh Jhingan admitted that India should have done better in their World Cup qualifiers campaign.

Sandesh Jhingan has won the Player of the Year award for the first time. Image: AIFF Media.

Sandesh Jhingan had a surreal feeling on his 28th birthday on Wednesday as he was named AIFF Men’s Footballer of the Year. The player of the year is picked on the basis of votes from coaches of the Indian Super League and I-League clubs. And the coaches had good reasons to chose the Chandigarh-born non-nonsense defender as the best player among all.

The center-back was an integral part of the ATK Mohun Bagan side, which narrowly lost to Mumbai City FC in the ISL 2020-21 final, apart from being one of the most important players for the national team which recently finished third in their group in the second round of joint 2022 World Cup and 2023 Asian Cup qualifiers to keep the hopes alive for the Asian Cup qualification.

“When I got to know (about the award), sapna jaisa laga (it was like a dream). I was quite surprised, but I was also happy at the same time. This being announced on my birthday, it was one of the best gifts I could have imagined,” says Jhingan.

What makes Jhingan’s achievement even more staggering is the fact that the former Kerala Blasters player missed the entire season of 2019-20 due to an Anterior Cruciate Ligament injury. The injury endangered the career of a player who already at that time was the best defender in the country. Later on, the COVID-19

pandemic made his wait to return to the playing field longer.

It was a difficult period but Jhingan had a philosophical view of his situation. Instead of brooding, his mantra to get back to his best was to keep his head down and continue the good work.

“…I felt bad that I could not provide my service on the pitch. But I didn’t sympathise with myself. I didn’t let anyone sympathise with me, for me. I just got down to work…I just kept believing, kept doing what I had to do and of course, it was a very long 13-14 months to come back but everything happens for good and I was very happy that on 20th November I made my comeback.”

Talking about the World Cup Qualifiers where India finished third after playing tame draws against Afghanistan and Bangladesh, Jhingan admitted that India should have been “better” in their campaign, but also added that the team has its sights on qualifying for the 2023 Asian Cup in China.

“We tried our best, we gave everything we could…we should have done better, honestly. You can’t change it, you got to look forward. We finished third, now it’s about doing well in the Asian qualifiers,” he says.

The last time around, India topped its group in the third round of qualifiers, making it to the 2019 Asian Cup. They are once again expected to face relatively easier opponents, however, Jhingan suggested against taking anything lightly.

“The last time we played the qualifiers, we topped the group. So we have good memories of Asian Cup qualifiers. But today in modern football, the moment you get complacent or take something lightly, you always suffer. The boys know it. Whatever the group comes we are going to be positive about it because our aim is to be in Asian Cup in China and do well there. We did decently well last time but we want to make it better this time,” he adds.

There were also some lighter moments during the conversation when Jhingan shared what he has learnt from the national coach Igor Stimac who was a regular for the Croatian team that won bronze at the 1998 World Cup.

“I believe I am a very good learner, I learn from everyone, from our gaffer as well…of course he helped me a lot in defending crosses. Professionalism and lots of small things (is what) I have learnt from him. He has played at the highest level in the World Cup, played in the Premier League, so every day just being around him is a learning process. Yeah, very happy to have him as our national team coach, especially being a centre-back helps me a little bit more because he played in the same position,” Jhingan says.

Loading...
Denial of responsibility! TechiLive.in is an automatic aggregator around the global media. All the content are available free on Internet. We have just arranged it in one platform for educational purpose only. In each content, the hyperlink to the primary source is specified. All trademarks belong to their rightful owners, all materials to their authors. If you are the owner of the content and do not want us to publish your materials on our website, please contact us by email – [email protected]. The content will be deleted within 24 hours.
aimAsianCupDefenderFirstpostIndiaJhinganSportsNews
0
Share