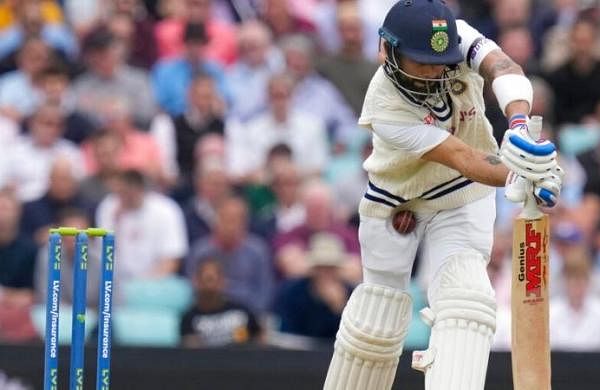 LONDON: Skipper Virat Kohli couldn’t convert his good start into a much-anticipated three-figure knock as India’s struggles against a high quality England seam and swing attack left them crawling at 122 for six at tea on the opening day of the fourth Test here.

Kohli (50 off 96 balls), who looked a few notches above his other batting colleagues, hit some delectable cover drives but the fast-rising Ollie Robinson (16-9-24-2) got one to rear up as the Indian skipper closed his bat face to provide Jonny Bairstow a regulation catch.

The Joe Root dropped catch at slips off Chris Woakes’ (10-5-19-2) bowling didn’t matter much as Kohli, despite his eight well-timed boundaries, was once again consumed outside the off-stump.

On either side of Kohli’s dismissals during the session was Ravindra Jadeja (10) and Ajinkya Rahane (14)’s ejection from the crease which pretty much summed up another batting debacle.

Jadeja coming out at No.5 to protect an out-of-form Rahane was bizarre and it didn’t take much time for Woakes to get him to nick one into the palms of Root.

For Rahane, the time is simply running out after yet another failure and the fact that he needed to be hid behind Jadeja under the pretence of having a left-right combination, said it all.

Earlier, India’s openers Rohit Sharma (11) and KL Rahul (17), after showing initial promise, were done in by high quality seam bowling, while Cheteshwar Pujara (4) got one from James Anderson that could easily qualify to be the “ball of the series”.

Both Rohit and Rahul punished the loose deliveries from Anderson with 28 runs added within first 35-odd minutes before Woakes was brought into the attack replacing the senior-most pacer, who looked a bit tight during that spell.

A delivery outside the channel with extra bounce saw the normally patient Rohit jabbing at it and the catch was taken by wicket-keeper Bairstow.

Rahul, who had already hit three boundaries, was ready to pounce on anything over-pitched outside the off-stump before Robinson got one to jag back sharply from length and the TV replays showed that the ball would have clipped the bail.

The on-field umpire’s decision was upheld.

Kohli joined Pujara, who was again defending dourly save the one that got on his pads, which was clipped to the boundary.

However, Anderson (14-3-41-1), who has dismissed Pujara more times than his skipper, bowled a delivery just in the corridor of uncertainty.

Pujara played for the inswing but once it pitched, the ball took the outside edge into Bairstow’s gloves.

After premier off-spinner Ravichandran Ashwin’s exclusion, there was more surprise in store when Jadeja walked in with India at 39/3, perhaps to unsettle the bowlers with a left-right combination.

Loading...
Denial of responsibility! TechiLive.in is an automatic aggregator around the global media. All the content are available free on Internet. We have just arranged it in one platform for educational purpose only. In each content, the hyperlink to the primary source is specified. All trademarks belong to their rightful owners, all materials to their authors. If you are the owner of the content and do not want us to publish your materials on our website, please contact us by email – [email protected]. The content will be deleted within 24 hours.
England Test SeriesHitsIndiaIndia vs EnglandKohlinews updateOllie RobinsonOval
Share

McDonald’s McFlurry Machine Is Broken (Again). Now the FTC Is On It.