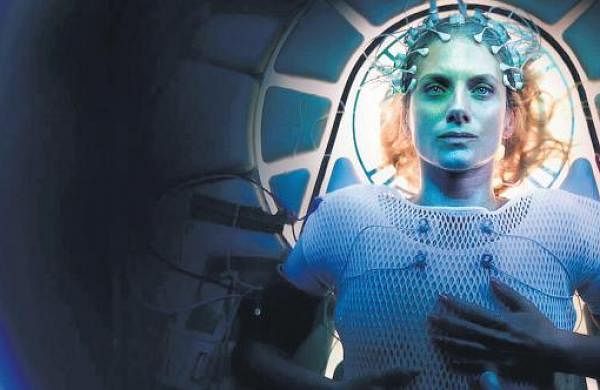 Alexander Aja’s latest thriller, Oxygen, is a nerve-wracking depiction of helplessness and intense claustrophobia. The idea of the protagonist trapped inside a coffin, or something that creates a similar effect, is not new. The best example of this is Ryan Reynolds’ Buried, and, to a much smaller extent, Kill Bill. But through Oxygen, Aja proves that there is still a lot of fuel left in the tank.

The film opens with an image that evokes a mummy inside a tomb. But this ‘mummy’ is alive, struggling to free itself of some weird bandage-like material binding it. The ‘mummy’ is Melanie Laurent, and it would take us, and her, a while to learn that her character name is Elizabeth Hansen. As for who she is, where she is, and why she is inside a cryogenic pod with gradually decreasing oxygen level (this thought alone should be terrifying for Indian viewers given the present situation), you’ll have to wait more than 30 minutes. Every hint suggests the film takes place in a future where Minority Report-style technology exists.

Elizabeth is not entirely alone, though. Keeping her company is an artificial intelligence program, MILO, that sounds and functions very much like HAL 9000 from Stanley Kubrick’s 2001: A Space Odyssey. The silky-voiced Matheu Amalric seems a very apt choice for the program, which appears as a blue wavy ring animation on a screen. Unlike HAL, MILO possesses a seemingly benevolent nature, helping out Elizabeth in whichever way it can. If you’ve seen 2001, you’ll find yourself doubting MILO’s intentions, but, again, this is something else that requires one to wait till the ending to make sure. Calls made to ascertain her whereabouts prove frustrating. Imagine getting transferred when caught in a situation like this. (This particular aspect reminded me of another single-character thriller, The Guilty.)

By restricting the camera movements to within the confines of the pod, Aja and cinematographer Maxime Andre give us a tangible sense of Elizabeth’s chilling predicament. But, fortunately, we are spared the monotony that comes with the territory. The occasional detours into her memories—images of her husband, wide-open spaces, grass and leaves swaying in the wind—serve as calming devices to help her cope with a situation that almost occurs in real-time (the film’s runtime is close to 100 minutes). Meanwhile, video recordings and digital footprints provide clues about the person she was/is.

Aja, who last directed the effective alligator-infested disaster flick Crawl, is suitably restrained this time around. His attempt to hold our attention until the very end, revealing the necessary information at the most opportune moments, has been successful. I’m not sure I find the final moments entirely plausible, but they are intellectually stimulating nonetheless. There is enough in them to initiate debates among sci-fi buffs. The closing moments reveal loftier ideas that could serve as jumping-off points for a much bigger sci-fi project—perhaps something on the scale of The Matrix trilogy. But for the time being, this will do.

It only took me the first 30 minutes to conclude that Oxygen is Melanie’s best work. Much of the credit goes to Melanie, whose face, when not running the gamut from extreme panic to frustration, also conveys a dogged determination to get to the bottom of all this while being aware that she has less than an hour before the oxygen runs out. If you have not seen any other film of the actor before (aside from her most recognisable role in Inglourious Basterds, that is), then Oxygen would be a good recommendation —provided her performance doesn’t make you overly uneasy.

Loading...
Denial of responsibility! TechiLive.in is an automatic aggregator around the global media. All the content are available free on Internet. We have just arranged it in one platform for educational purpose only. In each content, the hyperlink to the primary source is specified. All trademarks belong to their rightful owners, all materials to their authors. If you are the owner of the content and do not want us to publish your materials on our website, please contact us by email – [email protected]. The content will be deleted within 24 hours.
Alexander AjaclaustrophobicDeftlyentertainment newsEntertainment updatemovieneatnews update
0
Share