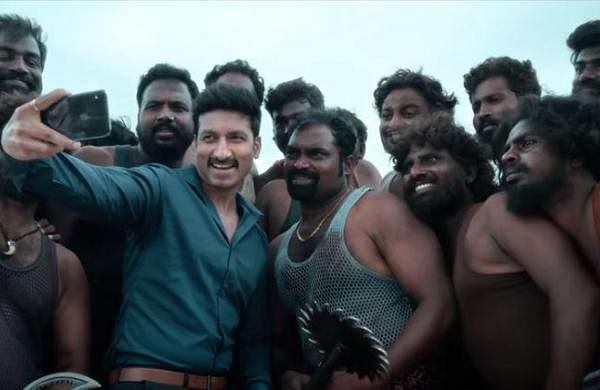 Maruthi’s films have always been sexist and regressive, but there was a time you could count on him to deliver the laughs regardless. His 2015 rom-com Bhale Bhale Magadivoy (2015) had some sparkling humour, and to be quite honest, his 2019 comedy-drama Prathi Roju Pandaage (2019) was enjoyable in bits. However, his latest release Pakka Commercial featuring Gopichand, Raashii Khanna, Sathyaraj, and Rao Ramesh, appeared more like a third-rate comedy that borders on being offensive. It’s not particularly well-written, and most of all, it’s a film that completely disregards one’s intelligence. The film never holds your interest as a sensible piece of work, but as an insensible piece of work, it’s enjoyable to the fullest.

Sathyaraj and Gopichand play father and son in the film which is pitted as a tussle between moral and immoral. Sathyaraj, plays Surya Narayana, an honest judge, who stands for the victims and the truth. An unfortunate incident in his life forces him to quit his office and he begins to lead his life by running a provision store. Unlike his father, Lucky, played by Gopichand, stands for those who give him large amounts of money (yes, the film’s title has been justified).

Vivek (Rao Ramesh), a flirtatious businessman, hires Lucky to fight a case and it is then Surya Narayana comes back to the court to confront his son. Then we have Raashii Khanna as Jhansi, a TV actor, especially known for her portrayal of roles as a lawyer. She is so obsessed with her craft that she even begins to pursue law to get into the skin of her character and seems distressed when she gives it up amidst the pandemic.

Rather than a coherent story, Pakka Commercial is a series of not-so-funny scenes strung together. The screenplay, if you ask me, can be blamed for the complete failure of this attempt, which is amateurishly directed and for the most part, indifferently performed. For some reason, the comedy entertainer genre ends up being misconstrued for mindless entertainment.

A comedy entertainer is the one that’s well-written with slapstick humour, but here, the laughs were laced around sexist jokes, racist jokes, and so on. If you watch this film, the only thing you share with your family or friends is a disappointment because a few talented actors have been relegated to playing caricaturish roles.

Sathyaraj and Rao Ramesh deliver convincing performances. But what’s missing is the serious element as the story thrives on absurdities and coincidences, especially in the scenes that lead to the climax. Also, many of us would have guessed the climax as it falls into the old traps of predictable character arcs, and shallow conflict. For the few stray moments of humour in this otherwise lacklustre film, there’s absolutely no reason you should punish yourself through this one.

Denial of responsibility! TechiLive.in is an automatic aggregator around the global media. All the content are available free on Internet. We have just arranged it in one platform for educational purpose only. In each content, the hyperlink to the primary source is specified. All trademarks belong to their rightful owners, all materials to their authors. If you are the owner of the content and do not want us to publish your materials on our website, please contact us by email – [email protected]. The content will be deleted within 24 hours.
commercialentertainerentertainment newsEntertainment updateGopichandMaruthi Dasarimindlessnews update
Share

Why sell now, buy later may not be the right strategy in this market