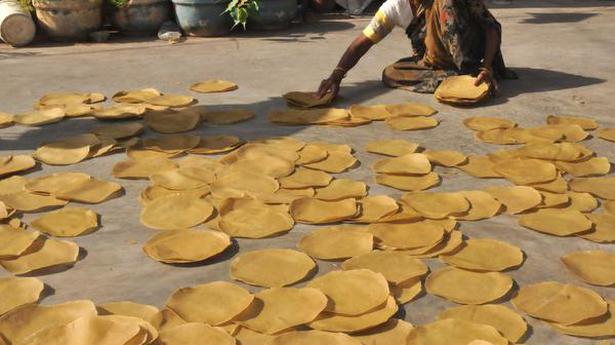 Way back, in the Sindh province, the papad was not just an accompaniment to meals but was offered as a snack to guests along with a glass of water

All three mealtimes at my home — yes, breakfast too — are usually marked with a query of how many papads will be needed at the table. The younger generation requests a particular, rather popular, peppery brand and instantly the voice of a rabbit singing its name echoes in my head. Spouse and I settle for the equally famous Sindhi papad.

The Sindhi papad is unique. It is an amalgamated version of its Punjabi and Rajasthani cousins: it has the urad dal and pepper of the former, and the moong dal and jeera of the latter. Way back in the Sindh province, it was not just an accompaniment to meals, but served to guests on its own as a snack with water. To combat the extremes of climate, its salty flavour compensated for the loss of sodium from the body during sweaty summers while the jeera and pepper fought phlegm in severe winters. Its history is not all innocent. Apparently, prospective brides at one time would be asked to roast a papad over a direct flame to judge their culinary skills.

Partition proved tragic for Sindhis. Unlike the Punjabis, they had no home state to come to. They scattered all over the country and the globe and had to start from scratch as refugees, having been forced to leave all their property and wealth behind. My mother was 14 when her family fled to save their lives. She clearly remembered how the women in her family dipped gold coins in gram flour batter and fried them as pakoras to slip them undetected across the newly formed border. My paternal grandmother sold her thick gold bangle at a refugee camp in Bombay to buy butter and ghee: a far cry from her earlier days when even the vark on sweets was a thin sheet of beaten real gold.

As the business-based community struggled to make ends meet, many of its enterprising women made and sold papads and pickles to keep the kitchen fires burning. The Sindhi pickle is also unique, being oil-less, with carrots, small onions, cauliflower, and sometimes turnips, okra, dry dates and lotus stems, pickled in vinegar and spices.

I once asked my mother why we bought papads and didn’t make them at home like many other families. She said that my father had once witnessed how tedious the procedure was and made her swear that she would never ever make them. However, I did get to try my hand at making papads in my in-laws’ place. But there was a problem. The papad dough was so tasty that I used to pop most of into my mouth, leaving very little to be rolled into papads. Years later, I was thrilled to find the finely kneaded dough of Sindhi papads being sold in Ahmedabad. The shopkeeper told me that it was mostly bought to be eaten as is than to be made into papad!

Often the butt of jokes for their love of papad, many Sindhis claim that it is their favourite chakhna with their daily peg or two. As for me, I relish my papads in this rainy weather — not fried in oil or roasted over a flame but cooked Sindhi style, over a hot tawa dabbed with a few drops of oil. I recall one of my mother’s fondest memories. Her toothless grandmother would ask her to crush the papad into a fine powder between her palms so that she could enjoy it without hurting her gums. I often wonder if I too will be as addicted to it if I live to that ripe old age.

1. Wipe the dals with a clean dry napkin and keep them in bright sunlight for a couple of hours.

2. Mix both the dals and grind to make a fine flour.

3. Mix the chaaniyo in a glass of water and bring to boil. Cool, strain and keep aside.

4. Mix all the other ingredients with the dal flour. Make a firm dough using the chaaniyo water and a little water too as required.

5. Press and knead the dough for about 10-15 minutes to smoothen it as much as possible.

6. Take small portions of the dough and make thin rolls in the shape of kababs of 1 inch thickness. Cut the rolls into 1/2-inch parts with a knife.

7. Use a rolling pin to roll out each part into a flat and thin roundel.

8. Place on a clean dry mat in direct sunlight, flipping them a couple of times over the next two to three hours.

The writer is an award-winning children’s author, intrigued by culture and food.

Denial of responsibility! TechiLive.in is an automatic aggregator around the global media. All the content are available free on Internet. We have just arranged it in one platform for educational purpose only. In each content, the hyperlink to the primary source is specified. All trademarks belong to their rightful owners, all materials to their authors. If you are the owner of the content and do not want us to publish your materials on our website, please contact us by email – [email protected]. The content will be deleted within 24 hours.
Loading...
lifestyle newslifestyle updatenews updatePakorapapadPapadsPartitionpickle
Share