Notice: amp_is_available was called incorrectly. `amp_is_available()` (or `amp_is_request()`, formerly `is_amp_endpoint()`) was called too early and so it will not work properly. WordPress is currently doing the `pre_get_posts` hook. Calling this function before the `wp` action means it will not have access to `WP_Query` and the queried object to determine if it is an AMP response, thus neither the `amp_skip_post()` filter nor the AMP enabled toggle will be considered. It appears the theme with slug `publisher` is responsible; please contact the author. Please see Debugging in WordPress for more information. (This message was added in version 2.0.0.) in /home/runcloud/webapps/techilive/wp-includes/functions.php on line 5313
 Paris to Berlin in an hour by train? Here's how it could happen. - TechiLive.in 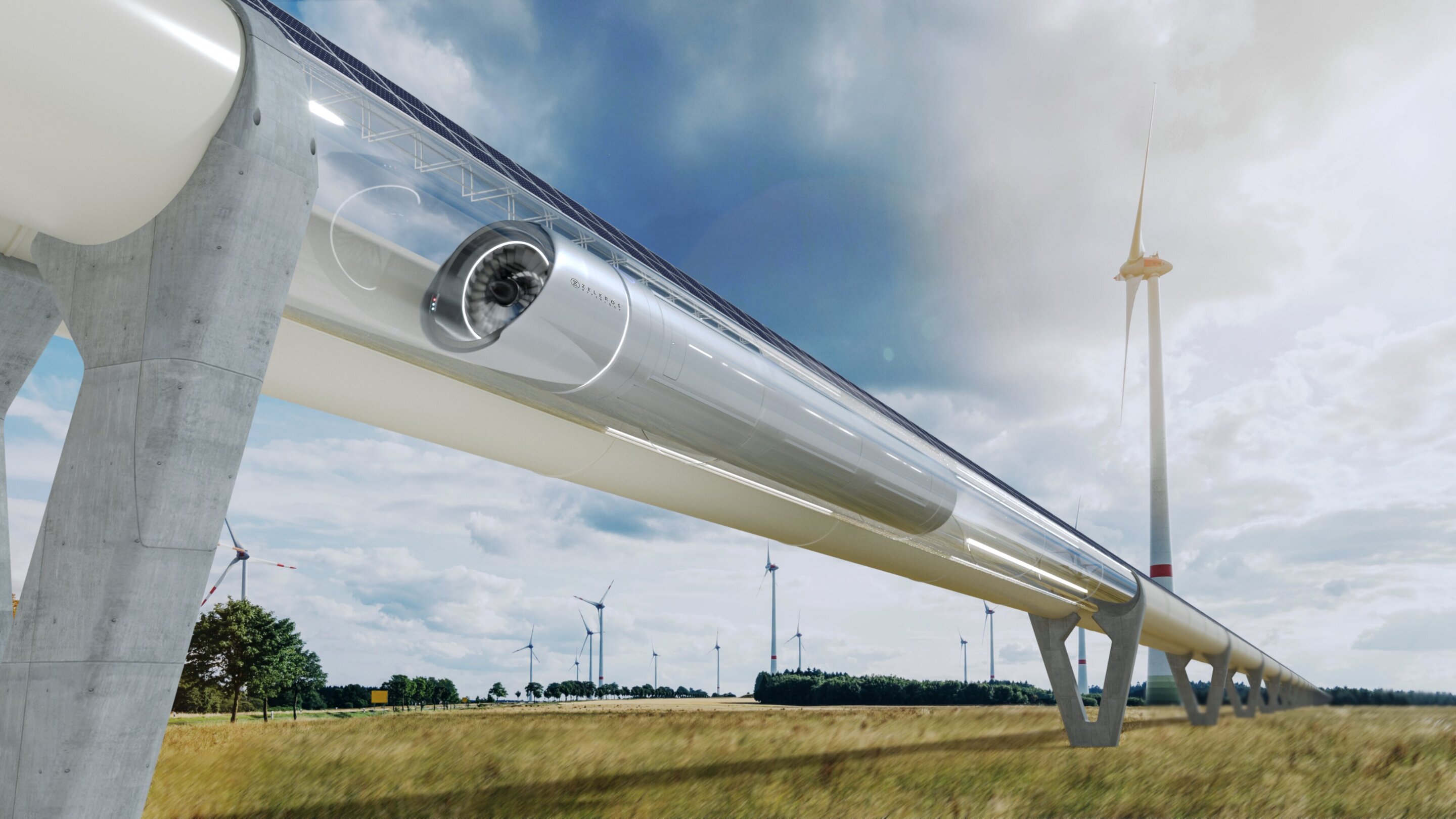 Paris to Berlin in an hour by train? Here’s how it could happen.

The hyperloop is what you get when you take a magnetic levitation train and put it into an airless tube. The lack of resistance allows the train, in theory, to achieve unseen speeds, a concept that is edging closer and closer to reality—and could provide a greener alternative to short-haul air travel.

In November of 2020 two people were shooting through an airless tube at 160 km/h in the desert outside of Las Vegas. This wasn’t a ride invented by a casino or theme park; it was the first crewed ride of a hyperloop by the company Virgin Hyperloop. The ride only lasted 15 seconds, and the speeds they achieved were a far cry from the 1200 km/h they promise they will one day reach, but it represented a step forward.

The hyperloop might be the future of transportation for medium-length journeys. It could outcompete high-speed rail, and at the same time operate at speeds comparable to aviation, but at a fraction of its environmental and energy costs. It’s a concept which start-ups and researchers have eagerly adopted, including several teams across Europe.

The idea originated with the US entrepreneur Elon Musk, associated with companies like SpaceX and Tesla. After he mentioned it several times in public, a team of SpaceX and Tesla engineers released an open concept in 2013. This initial idea then spawned a range of companies and even student teams, trying to design their own versions. Among them were several students in the Spanish city of Valencia.

“We started in 2015 after Elon Musk’s announcement, when we were still students,” said Juan Vicén Balaguer, co-founder and chief marketing officer of the hyperloop start-up Zeleros, which today employs more than 50 people and raised around €10 million in funding. “We’ve been working on this technology for five years, and it can be a real alternative mode of transportation.”

Yet the idea behind the hyperloop is older than Elon Musk, and it’s similar to an earlier idea called a vactrain or vacuum tube train. A comparable concept was already proposed by 19th century author Michel Verne, son of Jules, and has since then been periodically brought up by science-fiction writers and technologists. Now, however, the hyperloop seems to be getting ready for a breakthrough, and Zeleros is one of the concepts in the running.

What makes their technology unique is their approach to the tube. “Each company uses a different level of pressure,” said Vicén. “Some are going for space pressure levels. Which means that the atmosphere in the tube is similar to space. It contains almost zero air.”

This state would allow for very fast speeds, since the train would face almost no friction. Yet it comes with a range of practical issues. It’s very difficult and expensive to achieve and maintain this level of pressure for long stretches of tube. Safety would also be an issue. if something happens to the hull of the train, passengers would be exposed to dangerous vacuum conditions.

That’s why Zeleros is aiming for higher-pressure tubes. “It would be similar to the pressure seen in aviation,” said Vicén. The pressure in the tubes proposed by Zeleros would extend to around 100 millibars. This, in turn, allows them to copy safety systems from aircraft, such as the oxygen masks that drop from overhead cabins. This design choice also makes their tubes cheaper to build, thereby reducing infrastructure costs. Yet it also means their trains face more air friction when they glide through the tube, which they have to compensate for in other ways.

At the front of the train is a compressor, which looks like the front of an airliner engine and which sucks in air and lets it out at the rear, providing propulsion for the craft. A so-called linear motor is also located at key parts of the track, like the start, to give the train its initial propulsion. From there it self-propels along the track, with magnets at the top of the vehicle attracting it to the top of the tube and making it levitate. This proposed craft would carry between 50 and 200 passengers, and would reach up to 1000 km/h. By comparison, the cruising speed of a short-haul passenger aircraft is about 800 km/h.

But why do we need this in the first place? Shouldn’t we just invest more in our regular, high-speed trains? It’s more complicated than that, says Professor María Luisa Martínez Muneta from the Polytechnic University of Madrid, Spain, where she coordinates the HYPERNEX research project. HYPERNEX connects hyperloop start-ups, like Zeleros, with universities, railway companies and regulators, in order to accelerate the technology’s development in Europe.

Because of its limited speed—generally around 300-350 km/h—high-speed rail quickly becomes a bad choice for longer range travel if you want to get somewhere in a hurry. This gap is filled by short and medium-distance air travel, but aircraft emit a high volume of emissions compared to trains and are not always convenient, as airports can be located away from city centres.

A hyperloop could solve the problem. “This mode of transport is focused on covering routes between 400 and 1500 kilometres,” said Prof. Martínez Muneta. In this way a hyperloop would replace most shorter aeroplane travel, with much less of an environmental impact. “The hyperloop produces zero direct emissions as it is 100% electrical, while achieving higher speeds and therefore shorter travel times,” she said.

Bringing this vision into reality will likely take a decade. Vicén from Zeleros predicts that the first commercial passenger routes will come online around 2030, with hyperloops focused on cargo arriving a few years earlier, around 2025-2027.

According to Zeleros, this is an important step if hyperloops want to become commercially viable. These craft would operate at hitherto unseen speeds, with new safety characteristics like airless tubes. This would in turn require new regulations and standardisations, for example on what to do if the capsule depressurised.

The technology also remains somewhat untested, although real-world experiments are happening more often. Vicén mentions how they have already tested their technology in computer simulations, where they can model things like aerodynamic conditions and electromagnetic dynamics. They also use so-called physical demonstrators or prototypes that test in laboratory conditions how magnetism is affected by high speeds, for example.

Nevertheless, they are aching to move from the lab to the field. Right now, they are planning to build a 3-km test track at a still-to-be-determined location in Spain, where by 2023 they hope to demonstrate their technology, and they are working with the Port of Valencia to study the use of hyperloops in transporting freight.

Hyperloops might still be a few years out, but we’ll likely see more of them in the future.

Denial of responsibility! TechiLive.in is an automatic aggregator around the global media. All the content are available free on Internet. We have just arranged it in one platform for educational purpose only. In each content, the hyperlink to the primary source is specified. All trademarks belong to their rightful owners, all materials to their authors. If you are the owner of the content and do not want us to publish your materials on our website, please contact us by email – admin@techilive.in. The content will be deleted within 24 hours.
Loading...
Berlingadget updatehappenHereshourParistech newstech update
0
Share

Seven innovations brought to the smartphone world by LG | ZDNet