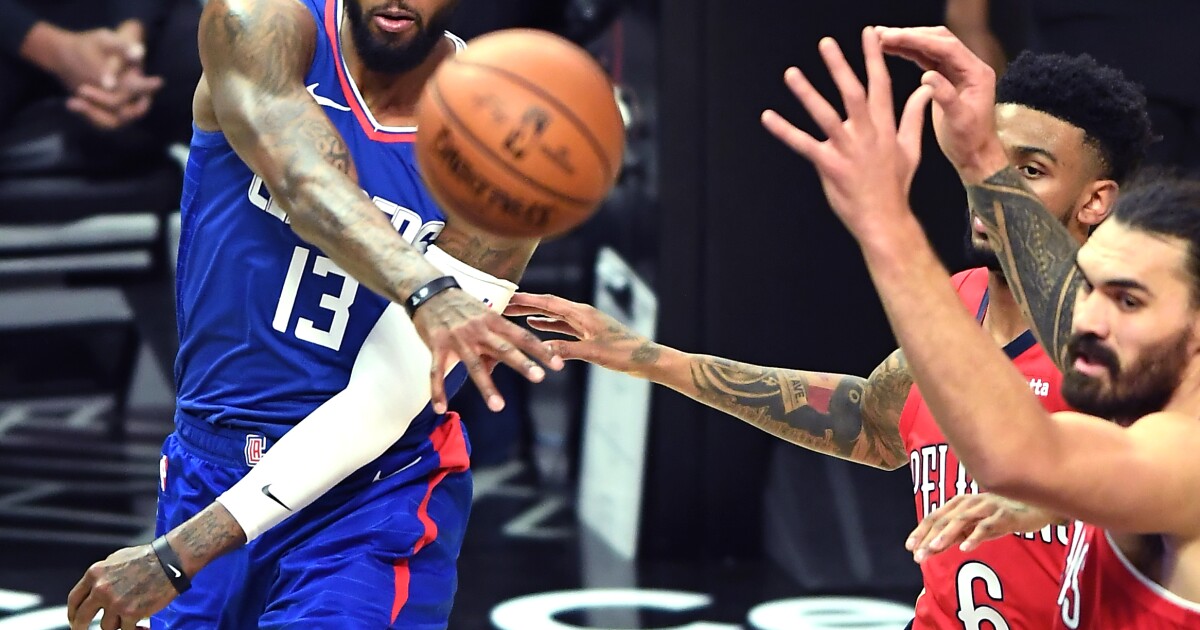 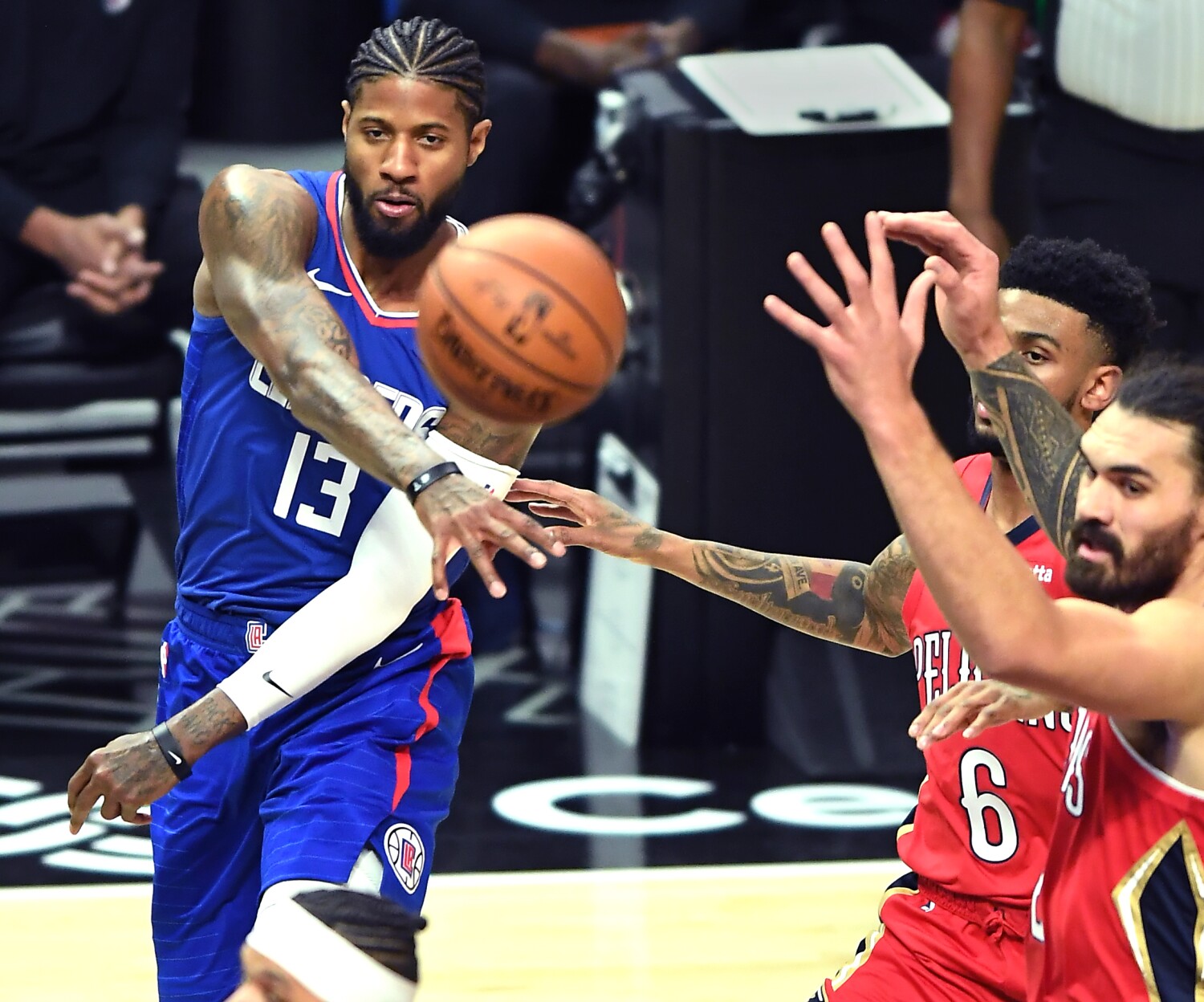 The Clippers, who enter the postseason Saturday, are the product of eight months of changes stemming from last season’s playoff fizzle.

“And we all have one goal, and we are all committed to it.”

Ahead of a first-round rematch against Dallas, perhaps no one on the roster feels more of a contrast than Paul George.

Not fully comfortable with his surgically repaired shoulders when he arrived at the NBA’s temporary Florida bubble last summer, the Clippers’ multi-dimensional wing made only 27% of his three-pointers during a first-round series victory against the Mavericks, a struggle that fed what he called growing anxiety while spending weeks away from family.

Pain from a bruised toe has lingered since midseason, but his shoulders are no longer the issue — his 41.1% shooting on threes and 51% rate inside the arc this season are both the second-best marks of his career. Neither is geography.

“This year it’s been easier because I have outlets,” George said. “You know, I’m able to live a normal life. I can go home, I can see my family, I can spend time with my family, I can interact with other people outside of this team and so that alone has just been a big difference to be back to some normalcy. It’s a big difference from the bubble life to where I’m at now, from a head-space standpoint.”

Dallas has proven it can mess with the Clippers’ heads before. They led the Clippers by 50 at halftime in this season’s third game before winning by 51. Dallas guard Luka Doncic can draw an entire defense’s focus onto him. On both sides, players have downplayed any lingering animosity stemming from their last playoff meeting, with Morris confirming Thursday that he apologized to Doncic earlier this season for what he said was an accidental step on Doncic’s injured ankle.

“I think there is definitely a mutual respect between the court, between us as players,” Morris said. “I told him before the game, I am not into making those dirty plays and trying to hurt nobody. I am a competitor first. I love taking the matchup, I love his game.”

Just the same, everyone agrees that the playoffs raise the intensity and emotion. Peace might not last 48 minutes.

For the Clippers to advance past Dallas, through the second round and into their first conference finals or beyond, amid a bracket with no clear-cut favorite in either conference, having George’s regular-season production translate to the postseason is not negotiable. The Clippers are deep: Two All-Stars and nine players who shot 40% or better from distance this season, a league record. But not everyone can mimic the tools of the 6-foot-8 George, who, challenged by coach Tyronn Lue to create not only for himself but others, also averaged a career-high 5.2 assists this season.

To get the most out of his unique skillset, he has used the same approach that has allowed the Clippers to take their own strides forward following last season.

When Lue entered training camp after succeeding Doc Rivers, eyeing a season in which teams needed to outmaneuver not only each other but COVID-19, he called “adapt” the word of his team’s season. In the six months since, a new buzzword has taken precedence: habits.

For George, who entered the season motivated to make up for what he described as an “unacceptable” debut season with the Clippers, generating close to or better than career-best marks has been the result of becoming more consistent with his habits, said Reggie Jackson, the Clippers backup guard who is George’s closest friend in the NBA.

“Whether it’s watching film, or if it’s with his stretches, just like I said, a more consistent approach,” Jackson said. “… Hopefully it carries him. I’m sure I’m expecting it, I know he’s expecting him to have success throughout these playoffs.”

Lue, for his part, has preached the gospel of driving into the paint and passing out to open shooters, talking on defense and starting games with a ready-to-play attitude.

Because of those differences, the Clippers arrive at the postseason feeling ahead of where they were at the same point last year.

Yet for all of their progress to this point, they understand their season ultimately will be judged on what happens in the playoffs.

“That’s what you sign up for and ultimately that’s what we’re playing for,” George said. “We’re playing to be the last team standing. At the end of the day it’s a burden every team at this point has to kind of go against, you know. It’s a journey and it’s one that we’re willing to go through.”

Denial of responsibility! TechiLive.in is an automatic aggregator around the global media. All the content are available free on Internet. We have just arranged it in one platform for educational purpose only. In each content, the hyperlink to the primary source is specified. All trademarks belong to their rightful owners, all materials to their authors. If you are the owner of the content and do not want us to publish your materials on our website, please contact us by email – [email protected]. The content will be deleted within 24 hours.
ChallengeClippersEnterGeorgenews updatePaulPlayoffsReady
0
Share