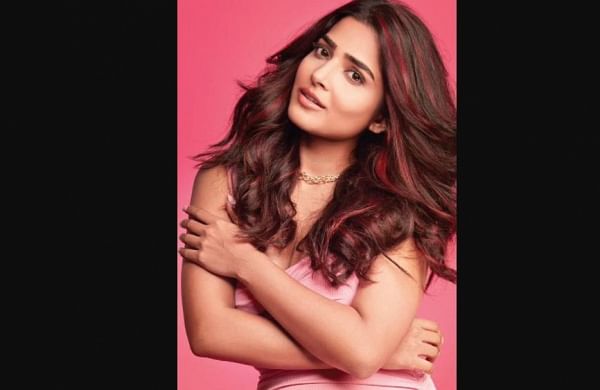 laiyaraaja’s music has changed the lives of many, including those in the movie industry, and it seems this has happened again. Following the release of the Santhanam-starrer Dikkiloona, Yuvan Shankar Raja’s remastered version of his father’s iconic number ‘Per Vachaalum’ (Michael Madana Kama Rajan) has become a raging hit, with actor Anagha being in focus. “The response has been overwhelming, and I am still processing all this. I love the original, and we were nervous about how people would perceive our reenactment of such a classic number. I am glad everyone loves it,” she says.

The actor has come into the spotlight, also because she won the SIIMA Best Debutant Actress 2021 (Tamil) award. This comes as much-needed recognition, she says. “All my handwork seems to have paid off, and I am grateful.” The ‘Per Vachaalum’ video that went viral featured Anagha’s dance moves prominently, and it is no accident, reveals Anagha, a trained Classical and Western dancer. “Dance is an important aspect of my life. It keeps me going, when I feel low,” she states. It was her love for dance that pushed her towards cinema.

Another influence is her love for sports, an aspect both her films so far, Natpe Thunai and Dikkiloona, seem to have utilised. “It was one of the reasons why I signed Natpe Thunai. I was excited and took the hockey training seriously. Hockey is a tricky sport to master, but I tried my best,” she adds.

In Dikkiloona, Anagha plays the role of Priya, who’s unhappily married to Santhanam’s Mani, who looks to use a time machine to change his life around. Two of the resultant new timelines touch upon the topic of abortion, and Anagha makes it clear immediately that she supports the idea of abortion being an individual’s choice. “That’s the choice of Priya as well in this film, and I do think it should be up to the individual.” The actor, however, found it hard to relate to Priya for other reasons. “But ultimately, I knew that a lot of people would be able to relate to her. I guess that’s what matters.”

Dikkiloona has come in for quite a bit of criticism concerning its depiction of women, but Anagha shares that she doesn’t look for political correctness in cinema. “I think films should be seen as entertainment. It is a story, after all. Mani, the protagonist, comes from a certain background and grew up in a certain way, and so, he does what he feels is right,” she says.

She hopes to find variety in scripts she chooses in the future. This quest for variety can already be seen in her film choices, with her upcoming Tamil film, Buffoon, having her play the role of a Sri Lankan Tamilian. She is also set to feature in the Mammootty-starring gangster film, Bheeshma Parvam.

Anagha holds big dreams for her future. If she were to get the time machine that Mani does in Dikkiloona, she says she would choose to work with the likes of Vetrimaaran. And perhaps, later on, she would like to make it as a screenwriter and director as well. “I would change nothing about the past though. No regrets,” she says.

Denial of responsibility! TechiLive.in is an automatic aggregator around the global media. All the content are available free on Internet. We have just arranged it in one platform for educational purpose only. In each content, the hyperlink to the primary source is specified. All trademarks belong to their rightful owners, all materials to their authors. If you are the owner of the content and do not want us to publish your materials on our website, please contact us by email – [email protected]. The content will be deleted within 24 hours.
AnaghaCinemacorrectnessentertainment newsEntertainment updatenews updatePeoplePolitical
Share

After 18 months, schools reopen across Maharashtra for physical classes – Times of India

Hina Khan pens a heartfelt note on her birthday