Georgina Maddox’s curation for Art Centrix brings together nine artists to look at the political, economic, colonial and flavourful history of spices

The Greeks call cinnamon the spice of love. Cardamom is often referred to as drops of heaven. But beyond such Hallmark-esque titles, spices often underline stories of trade and colonisation. “I remember reading that when St Thomas was asked why he was travelling to India, he said ‘to look for Christians and spices’. That stayed with me,” says writer and art historian Georgina Maddox. “Today, we take them for granted, so I wanted to bring out and enunciate everything that is associated with them.”

Maddox has been toying with the idea of a show around spices for over a decade — “from the perspective of how something so innocuous could be so political” — but it was in late 2019 that things came together. “Monica Jain [curator-director of Delhi-based Art Centrix] approached me to curate something for her space and it all serendipitously fell into place,” she says. Peppery Soliloquies, with the works of nine artists, began to take shape, exploring historical narratives, emotions, taste, and more. “Then the pandemic happened and it added more immediacy, with most of us going back to the kitchen, to the very basics.” Even the farmers’ protests in New Delhi have unwittingly added another layer, she feels, because it “brings out the fact that the production of food is a very political act”.

The mixed media show features names such as Arunkumar HG, Chetan Mevada, Damini Choudhari, Kishore Chakraborty, Meghna Patpatia and Vasundhara Tewari Broota. “The artists have created new pieces or revisited older creations for the show,” explains Maddox. A few have even come from personal collections. “I was having lunch with [art curator and documentarian] Ina Puri when she mentioned that [the late painter] Manjit Bawa used to make her a delicious version of baingan bharta, but with chillies. He later painted a shora, depicting the ingredients. She has lent it to me and it will be displayed along with a handwritten note of the recipe.”

Another piece is from Maddox’s own collection — a painting that Lavanya Mani had gifted her in 2006, following a discussion Maddox had with her about spices and its colonial undertones. 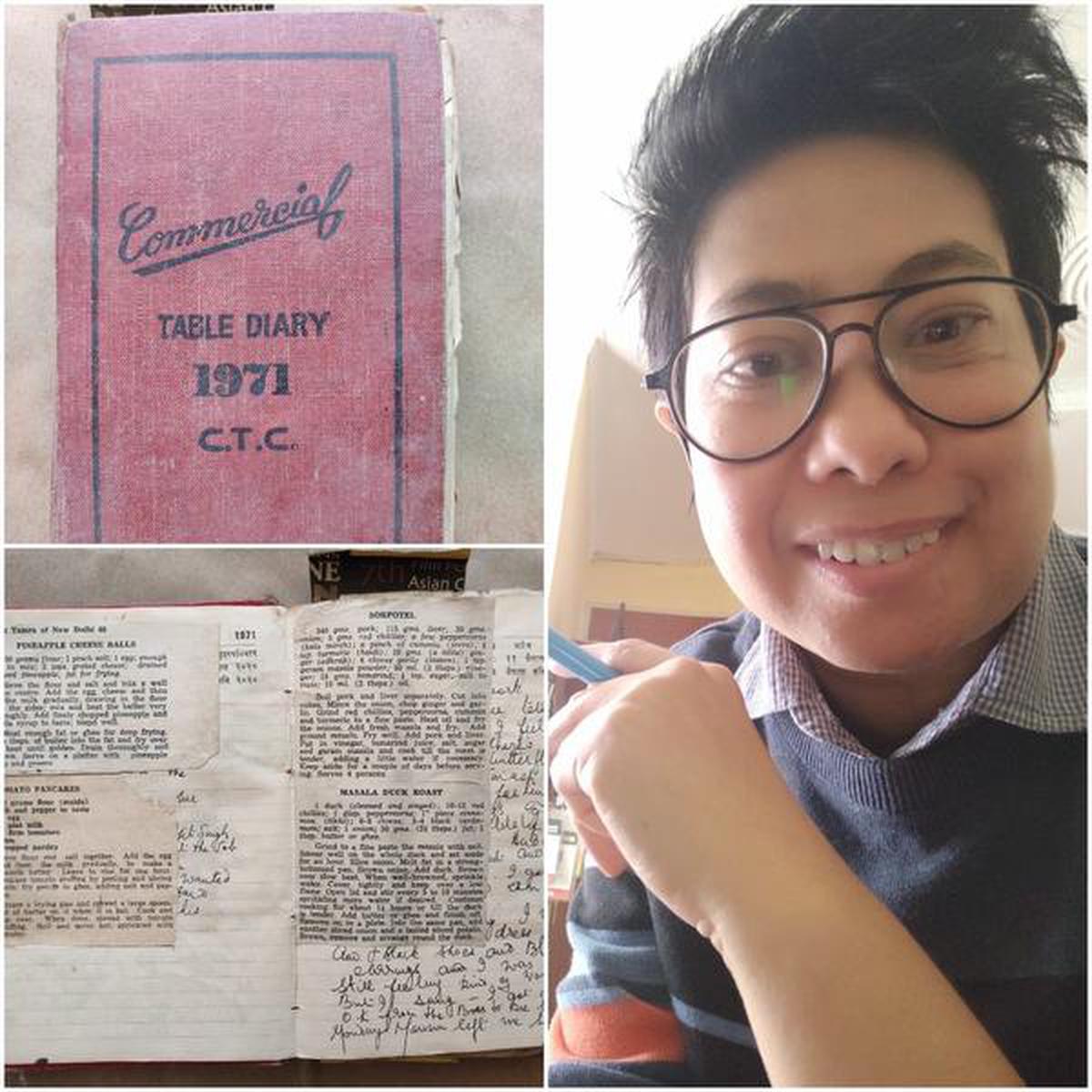 Clockwise from right: Georgina Maddox, and her mum’s cookbook

From the family diary

The show is also quite personal to Maddox because it explores a part of her own family’s micro-history — her mother’s love of cooking, to be exact. “I will share a table at the show, with Michael Swamy’s book, The East Indian Kitchen, which I revisited in 2020; Tract, a lovely photo book by Arunkumar HG, where he looks at the spices grown in India; and my mother’s cookbook… besides notes and drafts that I made while envisioning the exhibition, so viewers get an idea of the curatorial process,” she says. Her mum’s book was painstakingly compiled over decades with family recipes, “secret recipes [like the ‘food for love’,” she laughs], and clippings from magazines, on everything from a Goan sorpotel to pumpkin flower savouries.

“I began looking more closely at my history after I presented a paper in 2017, at the IIT Madras, on how the Anglo community is fading. I was advised by one of the other writers there to tap into the micro-history of my family to curate my shows and I’ve been doing that ever since,” says Maddox, who is of Anglo-Burmese decent. She shares that she plans to extend this research into a book soon. Meanwhile, Peppery Soliloquies will fill in a few gaps. What the artists say

The work was born out of a mistake, says Antao. A few years ago, while at a workshop in Jaipur, a potter dropped a pot on top of another and he was fascinated by the “third form” that was created. “When I got it cast in bronze, someone commented that the shape was quite risqué, which surprised me because I couldn’t see it,” he recalls. “Later, when Georgina came to me with the idea of spices, we got talking about their erotic aspects [both in form or as an aphrodisiac], and I decided to revisit the sculpture.” He introduced the imagery of garlic and sprouting seeds to explore reproduction. “In nature, it is so beautiful. What has gone wrong with the human race that we think it is bad or wrong? I wanted to extrapolate on that, and on the idea of food [many cultures and religions avoid certain foods because they are believed to be aphrodisiacs].” The sculpture is seemingly simple — a large batwa (bag) made of stoneware clay — but it explores complex subjects: farming, socioeconomic issues, climate change and the like. “Gujarat and Rajasthan contribute the bulk of India’s cumin production, and Banaskantha district in Gujarat (the longitude and latitude of which forms the name of the artwork) produces about 30% of this,” says Dalal, who visited the farms and spoke with the people about their problems as part of his research. “I wanted the work to be as real as possible. So while it has political connotations, it is also a documentation of how things are,” he says. While there, he also culled stories that he has converted into over 300 postcards. People are encouraged to reach inside the batwa and take one home. 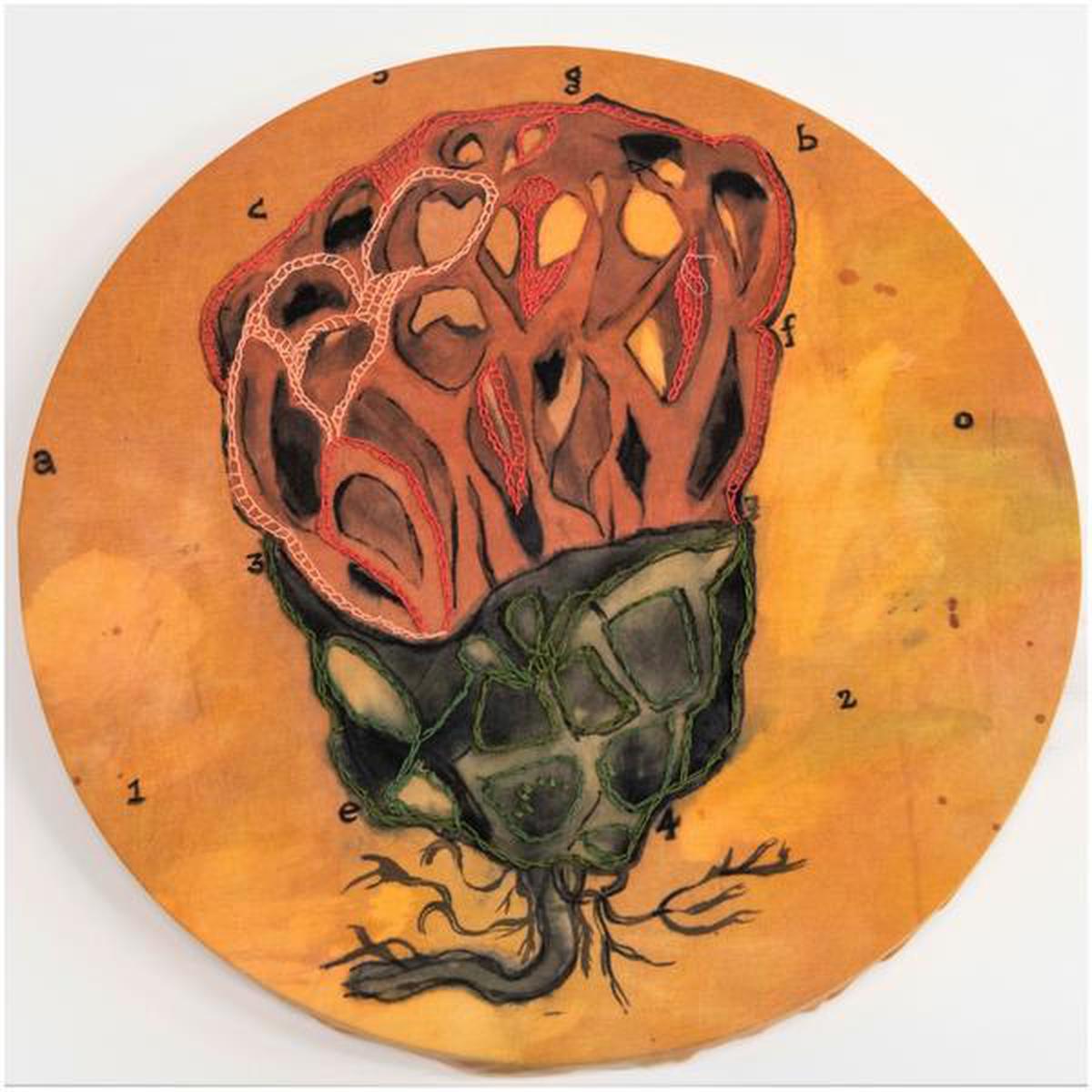 Much of the artist’s works explore the intersection between traditional Indian textile techniques (think kalamkari, batik, and tie and dye), natural dyes and its colonial history. Here she uses cloth as a narrative tool. “Essentially I am talking about the history through the medium itself — because I paint with natural dyes that I make with these highly-priced spices that were once so much in demand that through [its trade] India got colonised,” says Mani. She adds that she wants to re-contextualise “Victorian travellers’ stories through the lens of dye-making”.

Loading...
Denial of responsibility! TechiLive.in is an automatic aggregator around the global media. All the content are available free on Internet. We have just arranged it in one platform for educational purpose only. In each content, the hyperlink to the primary source is specified. All trademarks belong to their rightful owners, all materials to their authors. If you are the owner of the content and do not want us to publish your materials on our website, please contact us by email – [email protected]. The content will be deleted within 24 hours.
Art Centrix SpaceArt exhibitionartistsArunkumar HGchequeredChetan MevadaColonialDamini Choudhari
0
Share

Early Use of Biologics effective in Crohn’s Patients