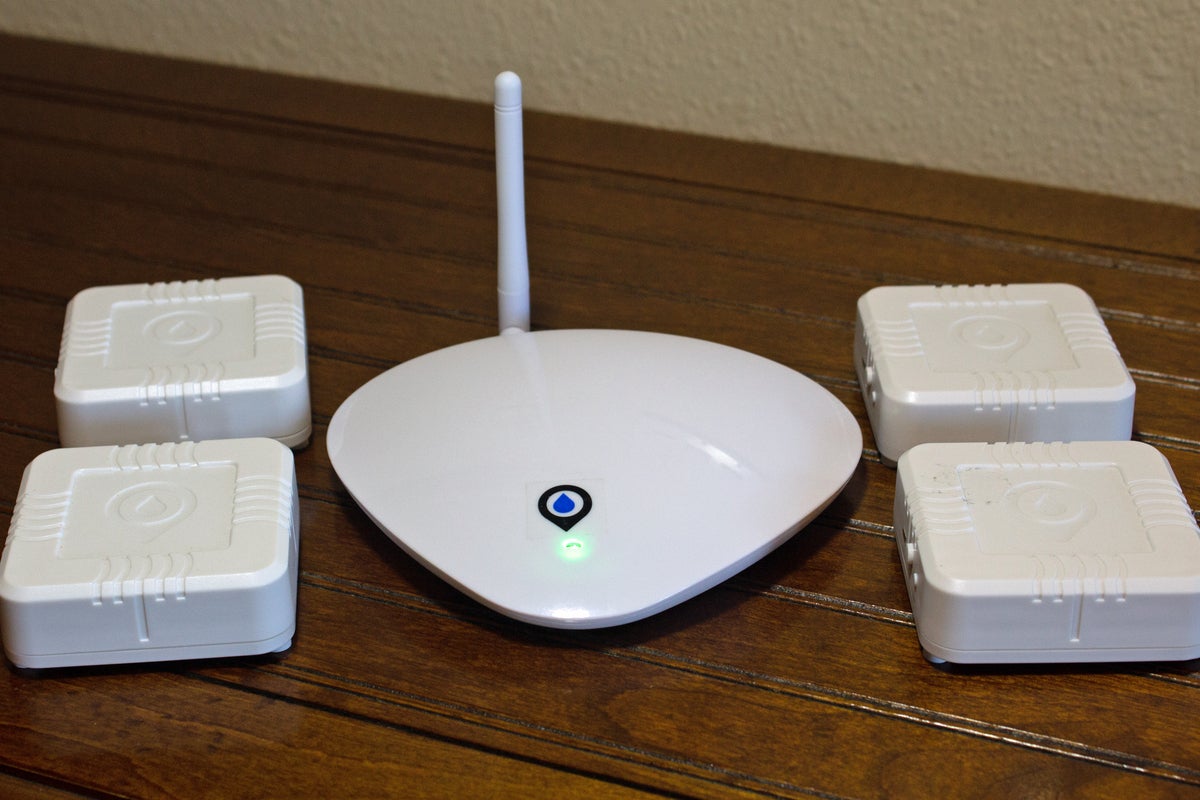 Peril Protect is a grandiose name for this product and its related service, because the only peril it protects you from is water damage. Water, to be sure, can be devastatingly pernicious, inflicting tremendous amounts of damage to your home before you discover what might seem like the most inconsequential leak. A catastrophic leak—from a water line that freezes and then bursts, for example—can be just as devastating in a relatively short amount of time. Let’s explore how effective Peril Protect would be in both scenarios.

Peril Protect is sold as a service rather than a product. The system consists of a hub and a collection of sensors, coupled with a professional monitoring service that will alert you with text messages and emails when a sensor detects a leak. You can also call an 800 number 24/7 that will dispatch a plumber to your home to effect needed repairs. The hub is outfitted with an LTE radio and does not rely on your Wi-Fi network or your broadband connection. It has an onboard battery backup, too, so you’ll be covered in the event of a power outage.

This review is part of TechHive’s coverage of the best water leak sensors, where you’ll find reviews of the competition’s offerings, plus a buyer’s guide to the features you should consider when shopping for this type of product.

How much does Peril Protect cost?

You decide how many sensors you need, pay a one-time shipping-and-handling charge, and then a monthly fee. There’s also a $74 “onboarding” fee, but this is waived as long as you don’t cancel the service within the first 12 months. The system is supremely easy to deploy because the sensors arrive pre-paired to the hub. All you need to do is plug in the hub and place the sensors at locations you want to monitor for water leaks: Next to the toilet; under sinks; next to major appliances, like your washing machine or water heater; and so on. As you’ll see in a moment, however, Peril Protect is not cheap.

The sensors are larger than most of the sensors of this type that I’ve reviewed, measuring about 2.75 inches square. These come pre-paired to the hub when the kit arrives, and they’re pre-labeled with the names you assign to them when you sign up for the service (you can rename them in your account, should you ever decide to move them to different locations). The sensors are powered by two AA lithium batteries that Peril Protect says should last three to five years. Rather than replace the batteries when they die, you exchange the entire sensor for a new one.

The sensors have gold contacts on the bottom that react instantly when they touch water (I tested them by placing them on top of a wet paper towel), and in addition to sending you text messages and emails, they’re equipped with a local siren (a relatively loud beeper, really) and a multi-colored onboard LED that will flash. When I tested one of the sensors, I received a text message from the service in less than a minute, and an email within two minutes.

Peril Protect won’t protect you from every leak

By its nature, Peril Protect can only alert you to the presence of water at the locations its sensors are placed. That’s fine for detecting a leaky toilet, a faucet supply line, or a failing water heater, dishwasher, or washing machine, but it won’t warn you of a burst pipe unless that failure occurs in the vicinity of one of its sensors or the water spreads there. It also won’t warn you of a leaky faucet dripping water into your sink, a failing flapper or valve in your toilet tank, or a dripping hose bib outside your home. To be fair, those types of leaks won’t damage your home, but they can waste prodigious amounts of water and cost you a lot of money via your utility bills (including your electric bill if you have a well, as I do).

And unlike many other leak sensors I’ve reviewed, Peril Protect’s react only to the presence of water—they don’t report temperature or relative humidity levels. Too much moisture in the air can increase the risk of mold damage, while very low temperatures can freeze your pipes, potentially causing them to burst. You’ll need other types of sensors to be warned of those situations.

This is also a good time to mention that Peril Protect is something of a smart home island (pardon the pun). It doesn’t work with HomeKit, IFTTT, Amazon Alexa, Google Assistant, or a smart water valve like Flo by Moen or Phyn. That means you can’t configure a Peril Protect system to trigger another device to do something, such as flash your smart bulbs when it detects a leak (at the inexpensive end of the scale) or shut off your main water supply to limit the amount of damage from a leak that its sensors don’t detect (at the pricey end of the scale).

Smart water valves clearly offer the best protection from water leaks, because they can stop the leak very quickly without you needing to do anything. On the other hand, they’re relatively expensive and depend on professional installation (unless you’re a very handy homeowner). Peril Protect service will cost less than either the Flo by Moen ($449) or the Phyn ($699) systems—at least initially. With the onboarding fee waived and the first three months of service free, a Peril Protect Essentials package will cost you $190 in year one and $228 every year after that (assuming the price of the service doesn’t go up).

Another alternative would be to purchase a professionally monitored home security system that includes water leak sensors, LTE fallback if your broadband fails, and battery backup in case of a power outage. A DIY system such as Ring Alarm would cost about the same per month as Peril Protect (after an initial outlay of $200, plus a one-time outlay of $35 per sensor). A professionally installed system like Vivint Smart Home would cost more ($45 per month, plus the cost of the initial system), but Ring, Vivint, and any similar system will also warn you of break-ins, fires, freezing temperatures, and other, uh, perils.

Peril Protect is difficult to recommend with its current pricing structure unless you only want protection from water damage, or you’re enamored with the system’s uniquely easy setup. That latter feature is a major advantage over the alternatives described above, especially the smart valves that require professional installation.

Peril Protect is highly effective at rapidly alerting you to water leaks—at least at the locations you deploy the sensors. It lives up to its promise. But smart valves offer the advantage of detecting leaks anywhere in your home’s water lines, and they can automatically shut off your main water supply to limit the damage. And while it’s true that Peril Protect’s sensors—or any other manufacturer’s sensors—can protect you from leaks that don’t involve your water supply lines (a flooded basement, for instance, or stopped-up toilet—other providers offer the same service as part of broader home-security systems that offer protection from several other threats, not just water damage.

What it all boils down to is that Peril Protect is just too expensive for the service that’s provided.

Loading...
Denial of responsibility! TechiLive.in is an automatic aggregator around the global media. All the content are available free on Internet. We have just arranged it in one platform for educational purpose only. In each content, the hyperlink to the primary source is specified. All trademarks belong to their rightful owners, all materials to their authors. If you are the owner of the content and do not want us to publish your materials on our website, please contact us by email – [email protected]. The content will be deleted within 24 hours.
Detectiongadget updateLeakLimitedPerilpriceyprotectreview
0
Share