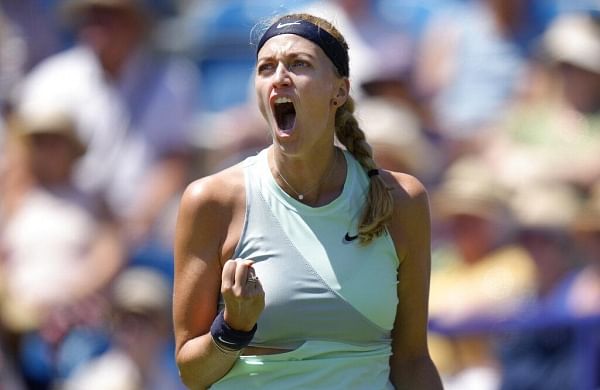 EASTBOURNE: Petra Kvitova moved into the Eastbourne semi-finals with a 6-3, 6-4 win over Harriet Dart as the former Wimbledon champion stepped up her preparations for next week’s Grand Slam.

Kvitova, who won Wimbledon in 2011 and 2014, is using the WTA Tour event on England’s south coast to warm up for her grass-court title bid.

The 32-year-old veteran might be past her peak these days, but she is still a danger on grass.

Dart showed glimpses of her talent during a spirited display against 14th seed Kvitova but never seriously threatened an upset.

Kvitova dominated thanks to a series of powerful groundstrokes and deservedly claimed a second British scalp, having eliminated Katie Boulter in the previous round.

Dart, 25, denied her Czech opponent’s first two match points but, having briefly turned that precarious position into her first break point of the afternoon, was unable to save the third.

Kvitova will play Beatriz Haddad Maia in Friday’s semi-finals after the Brazilian 15th seed received a walkover against Lesia Tsurenko, who was suffering from an elbow injury.

Jack Draper is the last British player in the men’s or women’s singles after beating compatriot Ryan Peniston 6-3, 6-3.

Denial of responsibility! TechiLive.in is an automatic aggregator around the global media. All the content are available free on Internet. We have just arranged it in one platform for educational purpose only. In each content, the hyperlink to the primary source is specified. All trademarks belong to their rightful owners, all materials to their authors. If you are the owner of the content and do not want us to publish your materials on our website, please contact us by email – [email protected]. The content will be deleted within 24 hours.
BolsterbuildupEastbourneHarriet DartKvitovanews updatePetraPetra Kvitova
Share

Why Dragon’s Dogma 2 Is Worth Getting Excited About

The Best Cheap Phones for Almost Every Budget

Not weighed down by the past, not worried about the future:…