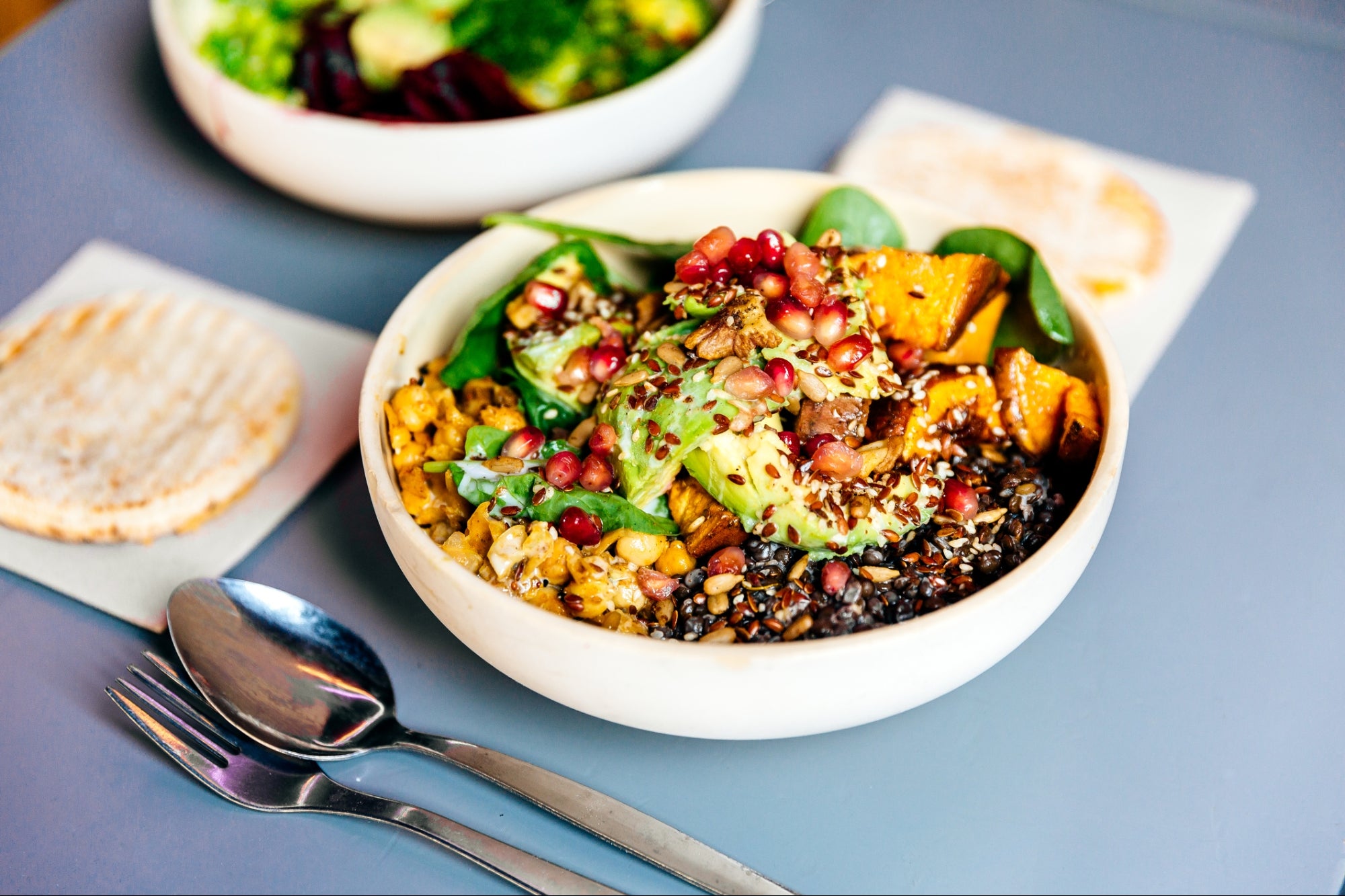 Plant-Powered Future: 8 Trends in Vegan Meat, Egg and Dairy to Watch for in 2022

Another year in the books, another Veganuary.

I think we can agree by now that veganism itself is not a trend — sales of plant-based food continue to grow rapidly. With the relationship between industrial animal agriculture and climate change still a pressing issue, there’s no reason it should slow down anytime soon. Plant-based food, it turns out, is big business (to the tune of an estimated $7 billion in 2020). And in business, there’s always got to be something coming down the pike. The realm of plant-based meat, dairy, and egg alternatives should be no exception.

Based on what we’ve seen in 2021, there are some projections we can make about what’s going to be new and interesting in plant-based food this coming year. We’ve been hearing a lot lately about cell-cultured meats and half-meat, half-veggie hybrid products, but good old vegan proteins aren’t being left behind. New innovations and business strategies continue to proliferate the plant-based food space.

From fermentation creations to celebrity-owned brands, here’s what I’m expecting to see more of in 2022.

From fitness to craft spirits, you know something has become a cultural mainstay when celebrities start putting their faces on it. The tail end of 2021 has seen a couple of celebrity brand debuts — and for products that are decidedly dairy-free. In early December, Cardi B announced the release of her new alcoholic novelty: Whipshots. It’s vodka-infused whipped cream that just so happens to be dairy-free.The marketing for the product so far isn’t making a big deal about the non-dairy aspect, which speaks to how normalized non-dairy products have become. (That said, Cardi B isn’t shy about her interest in going vegan.) Elsewhere in the music world, record producer Jermaine Dupri recently introduced his own brand of vegan ice cream, JD’s Vegan. It’s made from a coconut cream base and set to be sold in Walmarts around the country. The dairy alternative market is expected to reach a value of over $40 billion by 2026. It seems likely that more stars of the entertainment world are going to cross over and begin selling their own plant-based products going forward.

Related: From Fine Dining to Fast Food: Where Plant-Based Food is Going in 2022

The saying adapt or die is as true in the business world as anywhere else. And curiously, we’re seeing some of the world’s biggest meat companies do exactly that — adapt. Some, like JBS, the Brazil-based company that holds the title of largest meat producer in the world, are working it into their business strategy by introducing vegan chicken alongside their traditional meats. In other cases, big-time executives in the food industry are pivoting to plants: i.e, David Hoffman, former Dunkin’ CEO who has just raised $2.7 million for the vegan bacon brand Hooray Foods, and Doug Ramsey and Bernie Adcock, the execs who recently left their long-held positions at Tyson to work with Beyond Meat. These are big career moves, but they shouldn’t be much of a surprise. The market for plant-based food has been growing rapidly and is expected to continue doing so for the foreseeable future. It’s just good business.

Plant-based burger patties are practically commonplace nowadays. But vegan lamb? That’s something we don’t see very often, if ever. British culinary giant Marco Pierre White recently announced that he’ll be serving not just beef, but whole-cut lamb made by Israeli company Redefine Meat at his U.K. restaurants. And the British brand Wicked Kitchen has recently launched a vegan lamb alternative into the retail space. If lambless lamb goes over well with consumers, it probably won’t be long until it’s readily available in the U.S. and elsewhere.

It’s not as though vegan fish alternatives don’t exist — they’ve been offered at vegetarian Chinese restaurants for ages. Sophie’s Kitchen and Good Catch have both had plant-based seafood in the retail space for several years. 2021, however, saw the introduction of sushi-grade vegan tuna to the raw bar. Kuleana’s vegan tuna is made from a mix of plants including algae and the fungus koji, and it’s not just another bone thrown to the vegans. Time Magazine recognized it as one of the 100 best inventions of 2021 (also on the list: the Covid-19 vaccine). It’s soft-launching in retail markets and restaurants around the U.S., but if Time’s enthusiasm means anything, it likely won’t be long before we start seeing it everywhere.

Taking the milk out of milk chocolate

Vegan candy, especially chocolate, has until now mostly been a niche dominated by specialty brands like Amy’s and Unreal. Now, finally, we’re seeing legacy brands jumping headfirst into plant-based waters. Kit Kat launched a vegan version of its classic candy bar in several international markets earlier this year. German confectioner Ritter Sport recently announced a forthcoming line of vegan bars as well. The list goes on: Cadbury and Mars have already debuted vegan milk chocolate confections, and Lindt plans to do so this January. Although, it might be some time before you see non-dairy milk chocolate at your local 7-Eleven. Most of these products aren’t yet being introduced to the U.S. market. But, if all goes well, it’s only a matter of time before they start migrating out of Europe.

The nutritional value of plant-based meat alternatives has long been a subject of debate among nutritionists, consumers and business leaders. I have argued in the past that the relative unhealthiness of a Beyond or Impossible burger compared to kale or traditional black bean veggie burgers is actually part of its value. But that, of course, doesn’t speak for everyone. Impossible Foods tweaked its patties a couple of years ago to contain less saturated fat and other unwanteds. Beyond Meat followed suit earlier this year when it released a retooled, lower-fat version of its flagship patty as well as a new one that’s even lower in fat. Now, instead of makeovers, some plant-based brands are going for nutritional gold right out the gate. Case in point: Nowadays, maker of vegan chick’n nuggets, boasts a short and legible ingredient list and an impressive calorie to protein ratio. Expect to see more of this from existing and newborn brands in the coming year.

You didn’t think the dairy alternative industry was done exploring new ingredients, did you? UK supermarket chain Waitrose named potato milk as an up-and-coming product to look forward to in 2022. It’s being praised in part due to its sustainability. Sure enough, Swedish brand Dug will be expanding from Europe to the U.S. in the coming months. With over 20 million tons of potatoes produced in the U.S. each year, it’s only a matter of time before some competitors sprout.

Fermentation of the future

The latest, and perhaps most philosophically interesting development in animal-free food recently, has been the use of fermentation to create proteins that are chemically identical to the ones that come from animals. Perfect Day is an industry leader, providing brands like Brave Robot and soon, General Mills, with casein and whey grown in a facility, not harvested from actual cows. San Francisco-based brand The EVERY Company has developed a chickenless egg white protein that’s already being offered as a smoothie ingredient at Pressed juiceries. These products are hard to label — they’re cruelty-free, but are they vegan? They’re animal-free, but not free of animal proteins? But for folks who want to eat ethically and sustainably without sacrificing the tastes they’re accustomed to, they could be a game changer. Another SF-based startup called New Culture raised $25 million in funding to support its quest for cow-free — but not dairy-free — cheese.

Beans and greens are great and all, but sometimes a vegan, vegetarian, flexitarian or reducetarian just wants something hearty and familiar. Plant-based and food-tech meat, cheese and egg alternatives are anything but stagnant as a market sector. They’re experiencing new developments and innovations, raising a lot of seed funding and getting the attention of the entire food industry. And I, for one, could really go for a cruelty-free, environmentally friendly and relatively healthier cheeseburger in 2022 and beyond.

Denial of responsibility! TechiLive.in is an automatic aggregator around the global media. All the content are available free on Internet. We have just arranged it in one platform for educational purpose only. In each content, the hyperlink to the primary source is specified. All trademarks belong to their rightful owners, all materials to their authors. If you are the owner of the content and do not want us to publish your materials on our website, please contact us by email – [email protected]. The content will be deleted within 24 hours.
business newsBusiness updateDairyEggFoodfood businessFood BusinessesFood Industry
Share