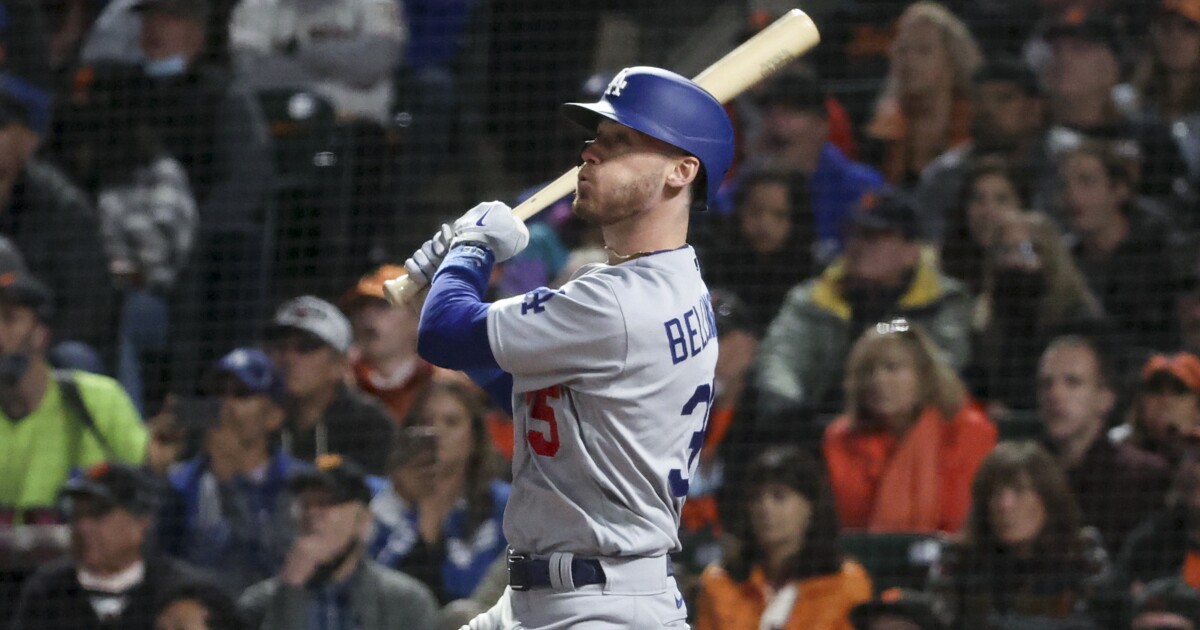 The noise was noxious.

He had been ripped and ridiculed, his ability dissected, his attitude challenged, his bat belittled.

When his lanky frame stepped to the plate at Oracle Park in the sixth inning with the bases loaded Saturday night in Game 2 of the National League Division Series against the San Francisco Giants, Cody Bellinger was a man tormented.

He had finished the season hitting .165, the worst average in history by a former MVP with at least 250 at-bats.

He had spent the summer flailing against the Giants, going two for 53 with 25 strikeouts.

He had endured parts of two games in this National League Division Series in embarrassment, striking out four times in five at-bats.

He had been hapless. He had been hopeless. And when he settled in his batting stance in that sixth inning with one out and his team leading by a run Saturday, the crowd jeered, Dodgers fans everywhere sighed, and his fortitude was again questioned.

But this time, for once, he answered.

Bellinger drove the first pitch from the Giants’ Dominic Leone to the left-center-field wall for a two-run double to break open the game and give the Dodgers a three-run lead that eventually became a 9-2 victory to even the series at one game apiece.

The Giants had won the series opener Friday. The Dodgers were desperately trying to even it up. It was only the second night of this best-of-five division series, but already for the Dodgers it felt like an elimination game, as they didn’t dare end the night needing three straight wins to survive.

“We’re going to play this game essentially like a do or die,” manager Dave Roberts said.

So when the two forces collided in a second consecutive emotional battle between these legendary rivals — their first postseason series in their 131 years of competition — it was once again loud and emotional and beyond tense.

And then, it was bombed by Belli.

His heroics were set up by Julio Urías’ five splendid innings, during which he gave up one run and three hits with five strikeouts. His timely hit was later supported by sparkling defensive plays by Trea Turner (diving!) and Mookie Betts (throwing!).

But the night belonged to Bellinger, who, before the game, answered questions at a news conference that made one question him even more.

You would think all this was driving him crazy? Think again.

You wondered, with all the analysis and swing breakdowns and heat he’s receiving, seriously, how he’s handling it? Keep wondering.

“How I’m doing it right now, I get the questions and I answer them,” he said. “I just do what I can to help this team win at the end of the day, you know, that’s all I could do.”

To those who are waiting for him to show emotion, keep waiting. To those who want the former slugger to show some trepidation or at least frustration, sorry, wrong guy.

Maybe it’s just his personality. Maybe he realizes that with all of his injuries, this was going to be a lost year, anyway. Whatever the reason, in that pregame presser, Bellinger seemed determined to just calmly swing his way through the storm.

“Obviously there was some more factors into it this year with what I had to deal with,” Bellinger said. “But at the end of the day, that’s in the past, so I’m only looking forward.”

Turns out, forward is where his hit traveled, and perhaps where his game will travel for the rest of the postseason.

Forward is also how the Dodgers were thinking before this game even though they trailed 1-0 in the series.

Remember, this group has played from behind before and won. They’ve pulled this off more than once.

They trailed the Atlanta Braves 3-1 in last year’s National League Championship Series and survived. Two years earlier they trailed the Milwaukee Brewers 2-1 in the 2018 NLCS and won.

“It’s a smart group, it’s a professional group,” Roberts said. “We understand the job that we have to do; we’ve been there before.”

That said, he acknowledged that Saturday’s game would be particularly difficult to lose because it would mean the Dodgers would have to win three straight against the Giants to capture the best-of-five series.

“Yeah, we don’t want to go down 0-2, so we’re going to play this game essentially like a do or die because I think it’s … an important game,” he said.

This importance was apparently lost on the Giants when the Dodgers scored two quick runs after it appeared Giants manager Gabe Kapler momentarily lost his mind.

In the second inning, with two out and Chris Taylor on second after a double against Giants’ starter Kevin Gausman, Kapler chose to intentionally walk AJ Pollock even though Pollock never seems to get a big hit in October and had a career playoff average of .162. He walked Pollock to get to Urías even though the stocky pitcher had nine RBIs this season.

Urías became only the fourth Mexican-born pitcher to record an RBI in the postseason, joining a list that includes Fernando Valenzuela, so that’s cool.

What wasn’t so cool for the Dodgers was how the Giants jumped back on Urías in their half of the second inning after he issued a leadoff walk to Wilmer Flores on a missed strike-three call by struggling home plate umpire Angel Hernandez. Brandon Crawford followed with a single and, two fly balls later, the last by Donovan Solano, the Giants had pulled to within 2-1.

Four innings later, however, the Dodgers began pulling away, thanks to this strange new asset known as Cody Bellinger.

Denial of responsibility! TechiLive.in is an automatic aggregator around the global media. All the content are available free on Internet. We have just arranged it in one platform for educational purpose only. In each content, the hyperlink to the primary source is specified. All trademarks belong to their rightful owners, all materials to their authors. If you are the owner of the content and do not want us to publish your materials on our website, please contact us by email – [email protected]. The content will be deleted within 24 hours.
BellingerCodyDodgershaplessheroicnews updatePlaschkesports news
Share