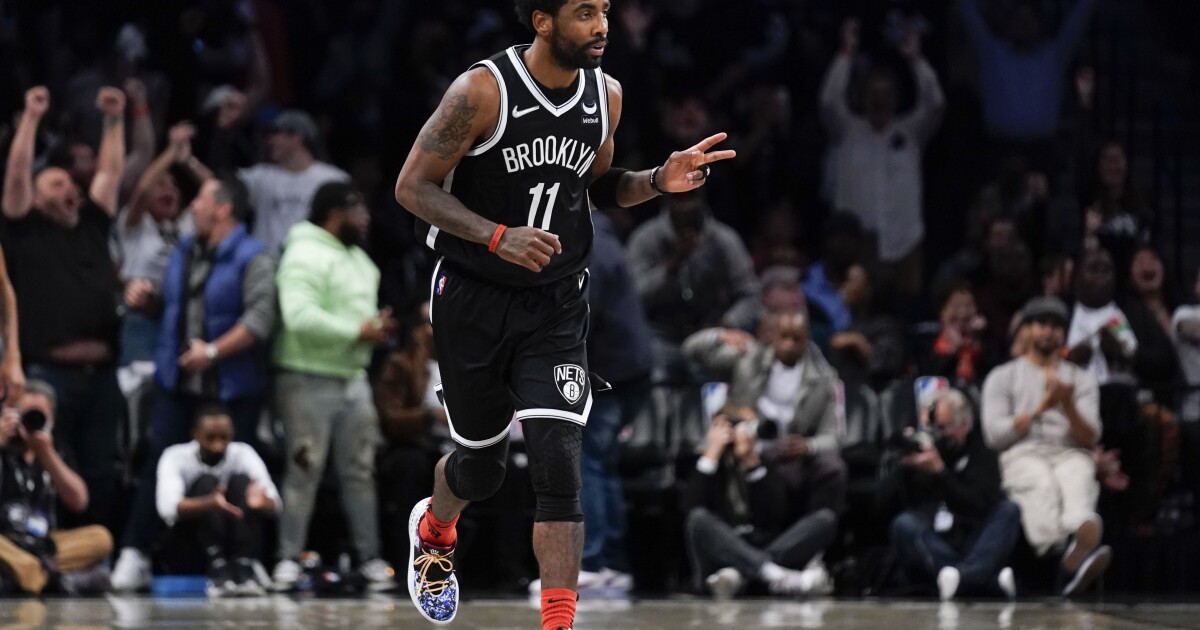 Kyrie Irving to the Lakers?

Is this some sort of joke?

The NBA draft-week madness began early Monday with rumblings that the enigmatic Brooklyn Nets guard and the Lakers had mutual interest in adding Irving to LeBron James and Anthony Davis in the creation of another super team.

That would be super weird, super chaotic and super dumb.

He hit the game-winning shot in Game 7 to capture the NBA championship for Cleveland in 2016. But he later demanded a trade because he didn’t want to share the court with James.

He was traded to the Boston Celtics. Before his second season with them, he publicly announced he wanted to re-sign with the team. Then months later, he ran to Brooklyn to pair up with Kevin Durant, and upon subsequent returns to Boston he has stomped on the Celtics’ midcourt logo and flipped off booing Boston fans.

He and Durant were supposed to lead the Nets to an NBA championship. But in three seasons, Irving has played in only 103 of 226 possible games while the Nets have only won one playoff series and were swept twice.

Not only did he miss games, but he once pressured other players to miss games as he was the loudest veteran voice opposed to resuming the 2020 NBA season in the Orlando-area bubble. He was eventually shouted down by the likes of James, and the Lakers eventually won their 17th title.

Irving is only 30, but sometimes he looks and sounds as creaky as the “Uncle Drew” character he portrayed in commercials and a movie.

His career path has been so crazily eccentric, perhaps the most reasoned resume entry is his celebrated public belief that the Earth is flat.

The Lakers need to ask themselves: Is this a player who can not only turn a bottom-dwelling team into a championship contender in the next two years but also lead it into the next era after James retires?

Then they need to realize the answer is a resounding no.

Unless Irving is willing to opt out of his Nets contract, become a free agent and take a historically large pay cut to come here for one-year, mid-level exception that would reduce his salary by at least $25 million, the only way he can join the Lakers is through a trade.

This trade would require shipping off Westbrook — which is good — but also first-round draft picks in 2027 and 2029, which is bad.

Those draft picks are the only assets the Lakers possess in hopes of luring future unhappy stars to their team. Hello, Luka Doncic?

If the Lakers are going to give up those picks, it had better be for a young star who can either guarantee them a title right now or truly carry them into the future. That’s not Irving.

All this rumbling about Irving and the Lakers was undoubtedly made public because Irving is angling for the Nets to sign him to the maximum four-year, $190-million contract. If you believe that’s happening, then you believe the Earth is flat.

At this moment, Irving is perceived as one of the most selfishly misguided players in all of professional sports, and that’s saying something.

While walking out on the Nets in January 2021 because he was so troubled by the insurrection, he was videotaped at a party.

While missing numerous games this past season because of the vaccine mandate, he would seemingly taunt his teammates by showing up in the stands.

They don’t have a championship team as constituted, but Irving is not going to change that in the short term and his presence would cause irreparable harm in the long run.

As it has been written in this space before, unless they’re willing to trade James and start from scratch, they’re going to have to endure several years of mediocrity, and there’s nothing Irving could do about that.

Several times in the last two seasons, Lakers fans have wondered, often out loud, in every sort of public forum, “Can it get any worse?”

Acquire Kyrie Irving and find out.

Denial of responsibility! TechiLive.in is an automatic aggregator around the global media. All the content are available free on Internet. We have just arranged it in one platform for educational purpose only. In each content, the hyperlink to the primary source is specified. All trademarks belong to their rightful owners, all materials to their authors. If you are the owner of the content and do not want us to publish your materials on our website, please contact us by email – [email protected]. The content will be deleted within 24 hours.
AcquiringDumbIrvingKyrieLakersnews updatePlaschkesports news
Share

Medicare Could Have Saved $3.6 Billion on Generic Drugs in 2020

Fortnite DOWN: How long are servers offline? What time does update 21.10 go live?